DETROIT â€” There’s nothing about the decision that new Ohio State commitÂ Dwan Mathis made on Sunday night that was easy.

To change his commitment from Michigan State to the Buckeyes was a heartbreaking moment for a high school football prospect who had grown close to everybody at Michigan State — from the players and commits to the coaches.

Still, for the 4-star quarterback, the part that was the most difficult was the potential to disappoint the fans.

“I know it’s a business,” Mathis said. “But the thing I was most worried about was letting down the fans. They’ve done so much for me.

“It was a hard decision. I didnâ€™t want to leave Spartan Nation, but the Buckeyes and Ohio State were the best thing for me at the time.”

The bonds in East Lansing were real, and they still are. But so, too, was the relationship between Mathis and the Buckeyes, even if sometimes he wantedÂ not to believe that.

Ohio State didn’t offer until last month, a bit late in the game for a quarterback with his reputation. But the coaching staff, especially offensive coordinator Ryan Day, was always there in his ears, urging him to be patient with the possibility of an offer looming.

“I really thought throughout the process, â€˜Iâ€™m sure Coach wouldnâ€™t tell you something and not do it,'” Mathis said. “They kept calling me, kept texting me and stuff like that so I just thought: Maybe this time,Â  maybe they are serious about it.”

Finally, the Buckeyes were ready to do business.

That’s when things got hectic for the 6-foot-4, 195-pound Mathis. He had been committed to Michigan State since September of last year and knew the Spartans had a very strict policy about visiting other schools. 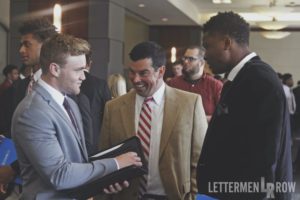 “I thought about it for a while, even just if I should take the visit,” he said. “At the time, I was just committed to Michigan State and I wanted to stay loyal to the coaching staff. But after a while I thought: I donâ€™t want to be the person that didnâ€™t go check out all of my opportunities, and go play for a national championship.

“Coach Day kept telling me about it and stuff like that, so I wanted to go see it for myself. Then it was everything he said it was going to be. Thatâ€™s a big thing, too. Really the national championship aspect, me fitting better in their offense than the pro-style, it really wasnâ€™t like how people make it seem, like I just flipped. I had a lot of loyalty to Michigan State, it really wasnâ€™t that easy. But it was best for me.”

What can Dwan Mathis do for Ohio State now?

Now that he’s made the difficult decision to switch his commitment, Mathis will be called upon by the Ohio State coaches to step up and emerge as a leader for the program. Urban Meyer made sure he knew that before he left Columbus.

“Coach Meyer told me to just recruit other guys and make the class one of the top classes, like they really do every year,” Mathis said. “Thatâ€™s like the biggest thing Coach Meyer was telling me. ‘You’ve got to get some receivers, youâ€™re nothing without the receivers. Got to get some offensive linemen.’

“[It’s about] just getting guys, selling them on Ohio State and what they have to offer.”

One of those offensive lineman is Justin Rogers, a 4-star 2020 prospect and a teammate of Mathis at Oak Park (Mich.) High School. RogersÂ 247Sports.com crystal ball reads 100-percent for Ohio State. For a year, the discussions about Ohio State between these two have usually been started by Roger.

That will change now.

“Of course itâ€™s going to change,” Mathis said. “Iâ€™m going to tell him â€œCome be a Buckeye.’

“I mean, he has top schools as well, so wherever fits him the best in his mind. But whatever I can tell him to get him to come.”

Ohio State certainly has to hope that decision will be a little easier than the one Mathis had to make for himself.