While Marvin Harrison Jr. has earned most of the praise between the three freshmen, Emeka Egbuka has quietly had a great spring, as well. Egbuka, the No. 1 wide receiver in the national recruiting rankings, caught seven passes on nine targets for 123 yards on Saturday.

He didn’t find his way into the end zone, but he showed his ability to get open and make plays down the field. And he looks like a prime candidate to enter the mix of a loaded Ohio State wide receiver room.

“The sooner guys can come along, the more depth they can provide, theyâ€™re only going to help the older guys get stronger,” Ohio State coach Ryan Day said. “Give them a break at some point in the game so then in the fourth quarter, theyâ€™re at their best. Iâ€™m impressed by all the young guys. I think Marvin, Emeka and Jayden [Ballard] have all shown they have the ability to play this season.

“Now, theyâ€™re nowhere near where they need to be, they have a lot of room to improve over the next couple months, but bright future there I think.â€

Egbuka lost his black stripe earlier this spring, and for good reason. But he’s just one of a handful of freshmen who looked Ohio State-ready.

Lettermen Row is breaking down four other early-enrollee freshmen who stood out during Saturday’s Spring Game. 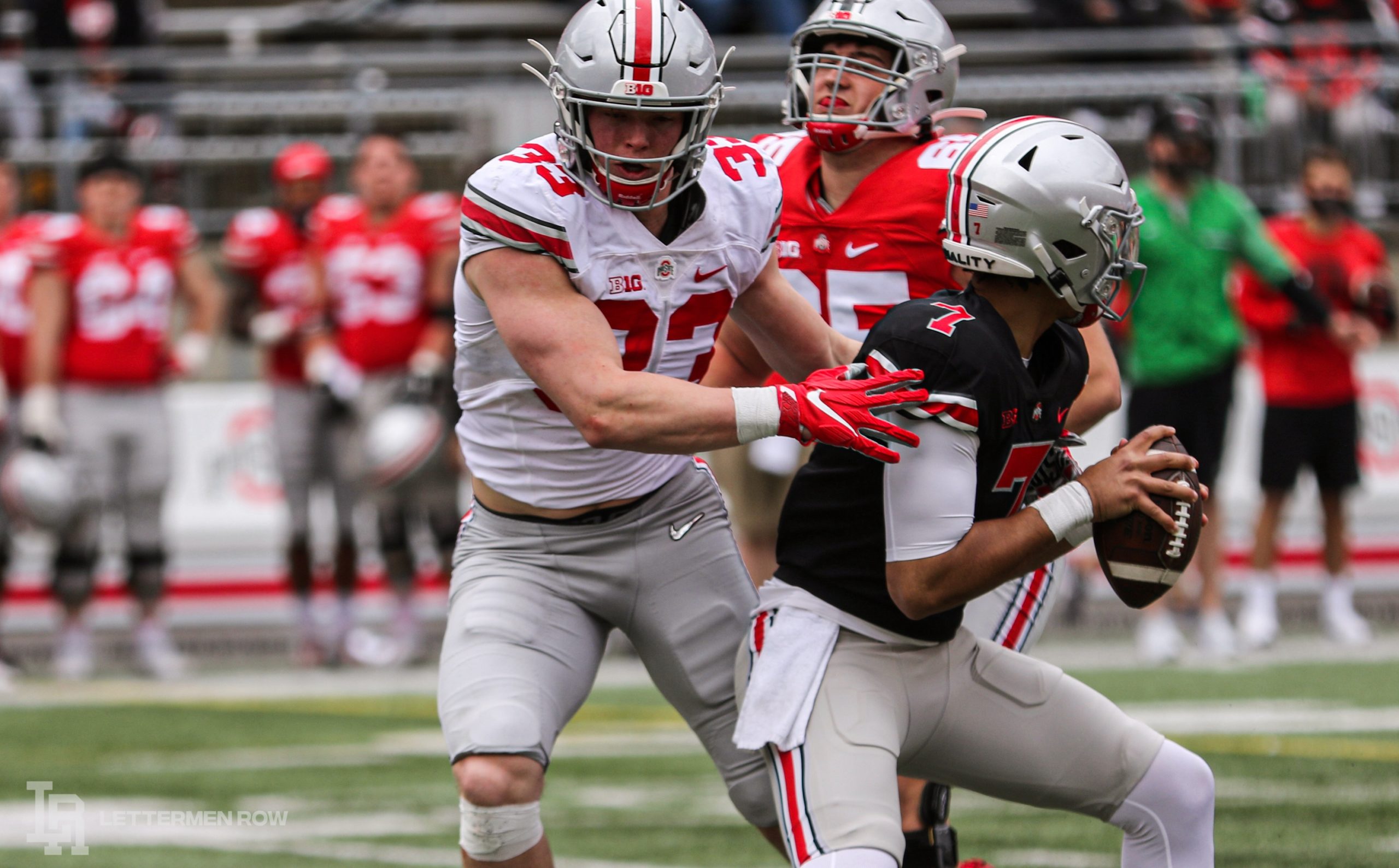 The highest-rated member of the Buckeyes recruiting class, Sawyer was expected to push for playing time early in his career. But Ohio State may not have even been prepared for how good Sawyer looked in his first spring in the program. Sawyer capped off an incredible opening camp with four sacks and a forced fumble in the Spring Game, dominating offensive tackles who tried to block him. Sure, Sawyer didn’t face Thayer Munford, one of the country’s premier offensive linemen. But the freshman sent a clear message that he’ll be on the field making an impact this fall. The spring practice sessions seemed to just be the beginning of Sawyer’s dominance.

Ohio State has a problem at running back. It’s certainly a good problem to have, though. The Buckeyes have six capable scholarship running backs all aiming to be the starting tailback this fall. And while four veterans are competing with two early-enrollee freshmen, one of the young stars continues to stand out. It’s hard to gauge running backs in the Spring Game, especially without tackling. But TreVeyon Henderson seems to be positioning himself to earn more carries with every practice. The former five-star prospect — and No. 1 back in his class — looks like a future superstar for the Buckeyes. Can he start Game One against Minnesota this fall? It’s certainly a possibility. 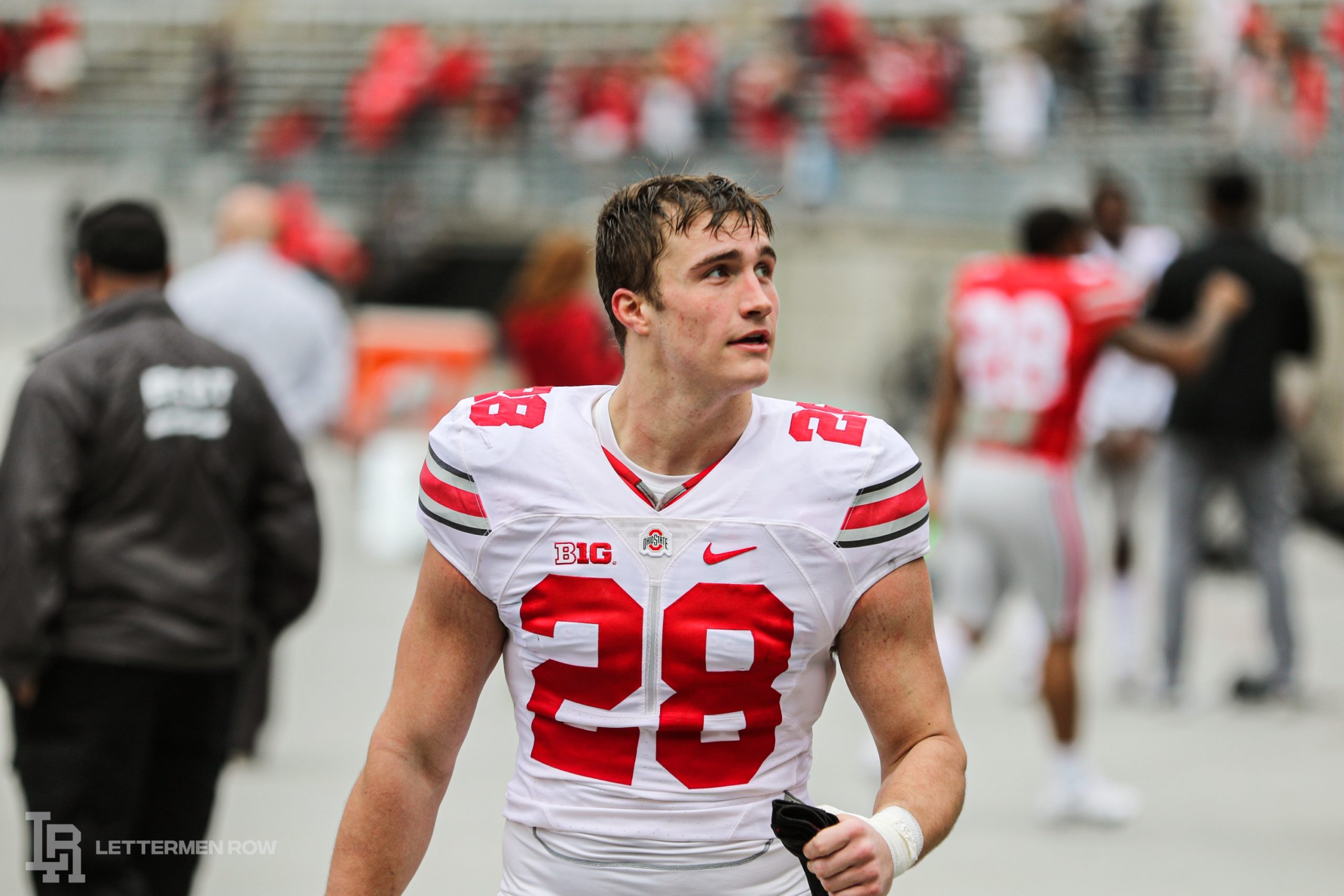 Ohio State is dangerously thin at linebacker — so thin that a walk-on long-snapper was helping the Buckeyes field a full two-deep at the position for the Spring Game. Of course, Dallas Gant didn’t play, and he’ll almost certainly be back in the lineup this fall. But while the Buckeyes were without some playmakers at linebacker, Reid Carrico was able to take plenty of reps this spring. The freshman inside linebacker was expected to come in this spring and learn, but he was thrust into a bigger role due to injuries elsewhere, and he’s been impressive. Carrico lost his black stripe early in camp and is now entering summer as a candidate for playing time this fall.

The quarterback competition at Ohio State is not over. As the spring wore on, all three signal-callers had their moments. While sophomores C.J. Stroud and Jack Miller were presumably ahead in the battle, freshman quarterback Kyle McCord has been impressive in his first spring with the Buckeyes. McCord flashed some of that Saturday in the Spring Game, but one of 15 practice sessions won’t decide this battle. As Ohio State enters the summer, no starter has been named. McCord is still in the running to be the starting quarterback in Year One for the Buckeyes.