Just two months after being shot in the face, Garrett started and starred for the Buckeyes defensive line in the opener against Nebraska. And he kept getting better, breaking out on the interior of the Rushmen.

But Saturday might be the highlight of the year for the Buckeyes senior from Las Vegas thanks to his key role in the 52-12 demolition of Michigan State inside Spartan Stadium.

In the second quarter, Garrett tipped a pass from Spartans quarterback Rocky Lombardi to himself while standing in the end zone. It was his first college touchdown, and it gave Ohio State a four-touchdown lead. The athletic and timely play was just part of what makes Garrett so good for the Buckeyes.

“The last time I had an interception or a touchdown of any sorts was in high school,” Garrett said. “… It was pretty weird. In walk-throughs on Thursday, the ball got tipped up and I caught it and ran it back in practice, so fortunately, I happened during the game. It was pretty wild.”

Garrett’s score made it back-to-back games in which the Buckeyes defense has tallied an interception return for a touchdown. And it was part of a first half that was punctuated by defensive dominance. Garrett was at the forefront of it with three total tackles and the aforementioned pick-six.

He continues to find new ways to be disruptive and change the game. And the Buckeyes defense is consistently better when Garrett is wrecking the interior.

“It’s pretty athletic to tip it and catch your own tip, that’s pretty good,” acting head coach and defensive line coach Larry Johnson said. “What a great story, though. Haskell Garrett, here’s a guy that’s probably lucky that he’s still here but yet continue to play great football and do great things for us. I’m really proud of where he’s at right now and the things he’s doing for our defense.”

Garrett certainly did enough to earn a Buckeye Leaf, but he wasn’t alone. Lettermen Row is breaking down the Buckeyes who helped Ohio State earn a blowout win despite being down plenty of key pieces. 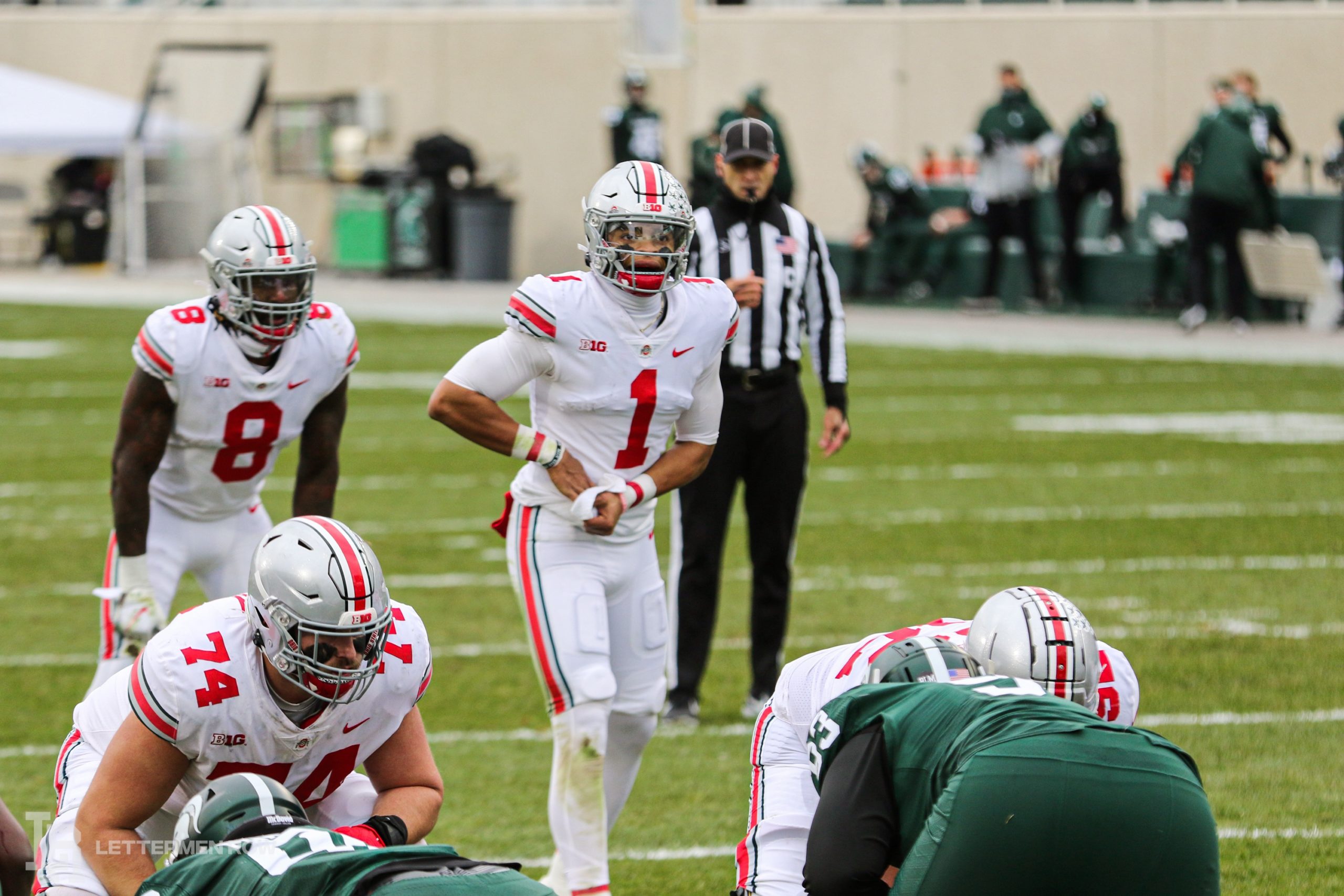 Justin Fields was back to Heisman-form against Michigan State. (Birm/Lettermen Row)

The taste of the worst performance of his Ohio State career had to sit in the mouth of Justin Fields for two weeks following the cancellation at Illinois. So in his first game action since the three-interception outing against Indiana, Fields put on a dual-threat clinic at Spartan Stadium. Fields had a career-high 104 rushing yards and two scores on the ground, as well as another masterful passing game — 199 yards and two touchdowns. He might not win the Heisman Trophy due to a small number of games, but he’s certainly worthy of being in the conversation. And his bounce-back performance Saturday was one of his finest.

The special season just keeps getting better for Haskell Garrett, who dominated from the defensive tackle spot once again in the latest Buckeyes blowout. Garrett stuffed the Spartans in the run game and was disruptive in his pass-rushing. But his best play of the game — and maybe of the season — came after the Buckeyes pinned Michigan State at the 1-yard line with a great punt. Spartans quarterback Rocky Lombardi dropped back to pass, but the ball was batted into the air and caught in the end zone by Garrett for his first-career interception and touchdown. That gave the Buckeyes a 28-0 lead and helped blow open the game in the first half.

Drue Chrisman must love punting in East Lansing. Two years after being the game MVP against Michigan State for his brilliant punting, Chrisman again hampered the Spartans offense by pinning them twice inside the 10-yard line and three times inside the 20-yard line. One of those punts traveled 74 yards and flipped field position; another was downed at the 1-yard line and set up a tipped-pass interception for a touchdown by Haskell Garrett. Chrisman has done his best punting work when he’s played against Michigan State. Saturday was no different. 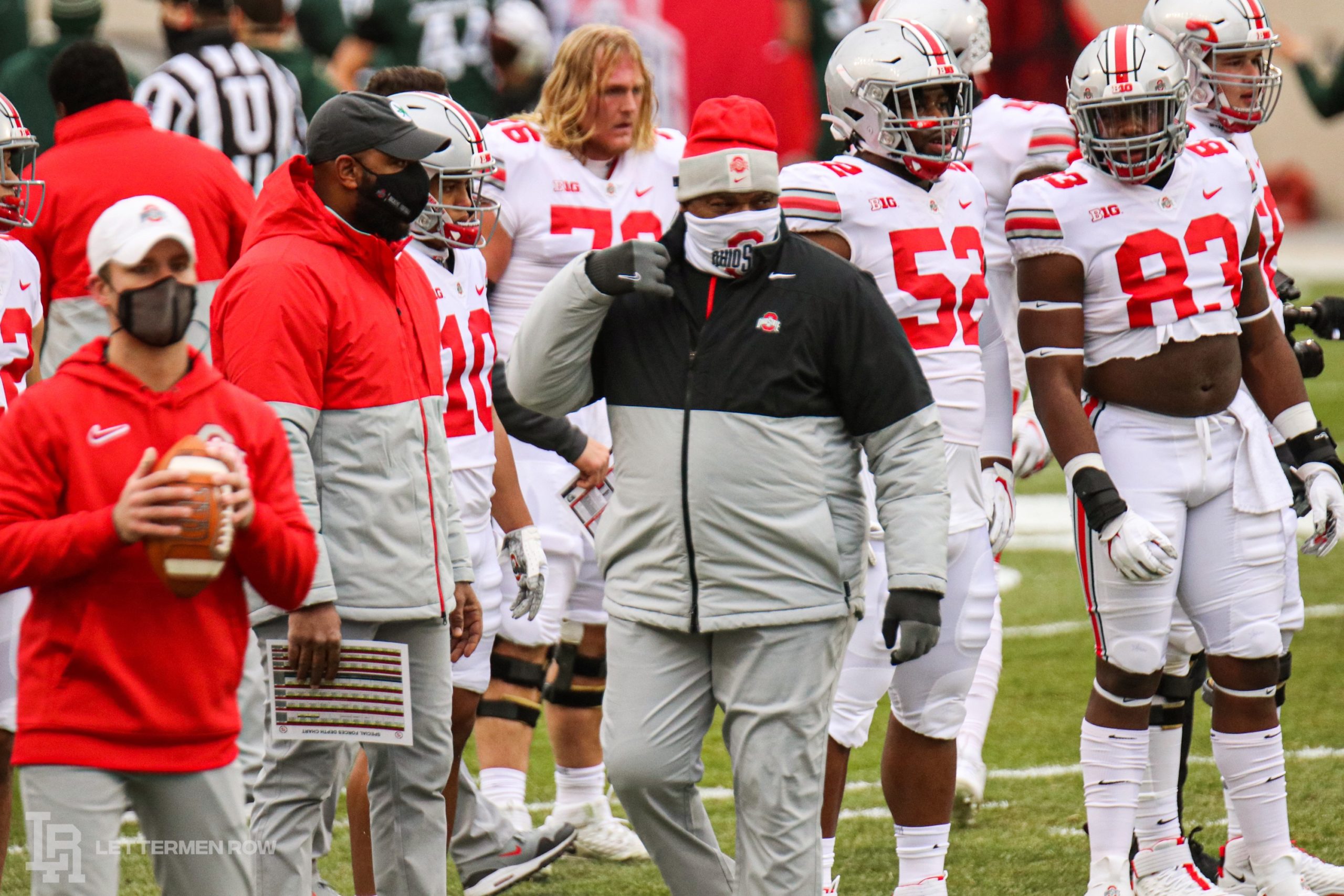 While Ryan Day was at home on the couch watching the Buckeyes game on television due to a positive COVID-19 test, the Buckeyes were in East Lansing beating up on a conference opponent. And leading the charge was defensive line coach and associate head coach Larry Johnson, who became the first Black head coach in program history in the dominant win over the Spartans.

Johnson has been with the Buckeyes since 2014 after coming over from Penn State, and he’s been a staple of the Silver Bullets defensive staff that has produced plenty of pros during his time in the program. But Saturday, Johnson made Ohio State history and can now hand the keys to the 5-0 football program back over the Ryan Day, who can return to action inside the team facility on Monday. That was more than worthy of a special-edition Buckeye Leaf for a coach.