COLUMBUS â€” Dawand Jones found an unconventional way onto the field as a true freshman for Ohio State.

Early last season, he found himself in the middle of the special teams unit, helping Ohio State free Chase Young up to block a kick to preserve a shutout against Cincinnati. The Buckeyes knew the massive 6-foot-8, 359-pound Jones could help them eventually, but last year was supposed to be a redshirt year for development.

Then, Jones began to make his impression on the coaching staff. And suddenly he was a backup fixture for the offensive line.

â€œHeâ€™ll probably go more than four [games], just because he is very talented,â€ Ohio State coach Ryan Day said last season. â€œWe want to get him in some of these games when we can. His ceiling is very high. We want his development to continue. I really think itâ€™s important for these guys to play. Again, we wonâ€™t be foolish with this and waste the year. But I think you saw that in the fourth quarter, on both sides of the ball, guys were into it, we were playing hard, competing.”

Ohio State wasn’t foolish, and Jones played in more than four games. With plenty of experience, he’s now competing for the vacant right tackle job alongside Nicholas Petit-Frere and Paris Johnson. He’s likely running third in that battle, an underdog to win it. But Jones wasn’t expected to contribute much last year and ended up burning his redshirt for the sake of experience and on-field reps.

He knows anything can happen. 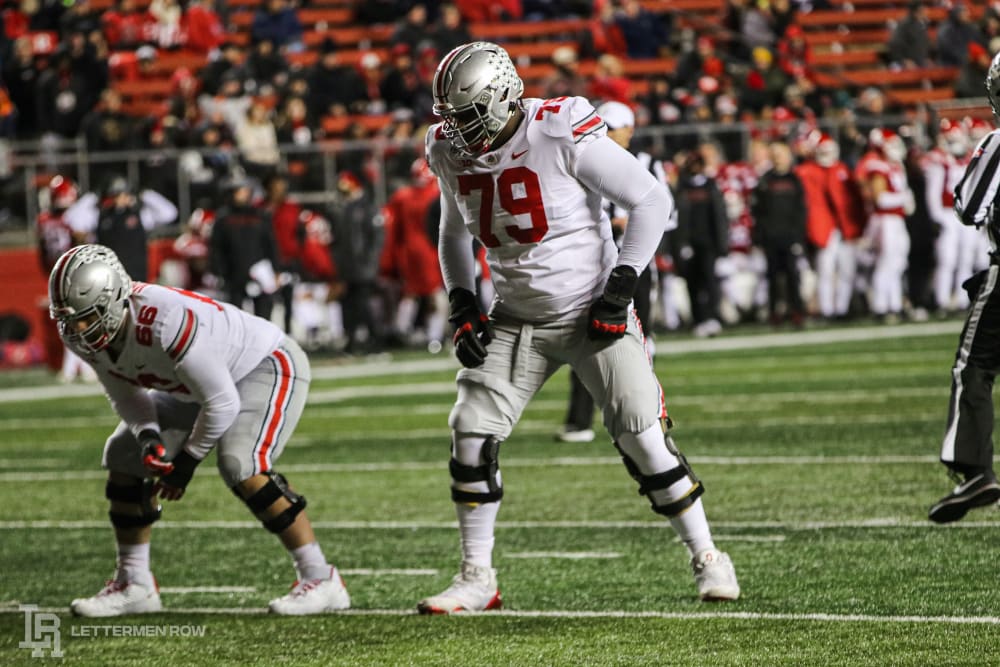 Jones was versatile enough to find a place on the second-team offensive line last year, where he began crushing defensive linemen and paving the way for long touchdown runs on the road. His versatility as a weapon in kick-blocking situations helped show he deserved to be on the field, and once he got there, he proved he belonged.

Showing versatility was the first step. Proof of belonging was second. Now, the challenge grows for Jones. He has to find a way to break out. With two former five-star tackles ahead of him on the depth chart, that won’t be easy. The depth of the unit will make that difficult — but that challenge and the development process at Ohio State was what drew him to the program as a recruit in the first place

â€œHonestly, I sat down with my high school coach to figure out which school was the best option for me,” Jones said in December. “And it’s not just because weâ€™re winning, but this school is going to develop me for sure and get me to where I want to be. No matter if thatâ€™s the NFL or not, I know Ohio State will develop me.

â€œIâ€™m happy I made the decision to be here.â€

Now Jones is working to find a bigger role there. And even if he falls short of the starting spot this season, his goals remain the same as he heads into year two for the Buckeyes. He’s not shying away from where he wants to be.

â€œIn our meeting room, we have this wall where all the legends are, all the All-Americans are,â€ Jones toldÂ Lettermen Row late last year. â€œAnd thatâ€™s what Iâ€™m just chasing, honestly. On my paper that I have where we have our goals, [itâ€™s written down] to be the next Orlando Pace. Thatâ€™s my goal, honestly, going out there. I write down those goals every day and try to live it out every day in practice.â€

Even before he was blocking kicks and crushing defensive lines late in games, Dawand Jones began thinking about his future. Even if trying to live up to Orlando Pace is unconventional, so is everything else he’s done at Ohio State so far.