Ohio State had an incredible season last year on its way to the College Football Playoff, where it nearly beat Clemson and advanced to the national title game. Many of theÂ key players from that team moved onto the NFL. How will the Buckeyes replace those departures? And who could step in to make plays similar to what the former Buckeyes made last season? Lettermen Row is breaking down key plays and who could make them. Next up: How the Buckeyes can replace Jashon Cornell on the interior of the defensive line.

The former five-star recruit fought through injuries and other roadblocks during his career. But when the Buckeyes needed a big play while facing a deficit in the Big Ten title game in December, Cornell was there to make it, ready for a huge moment.

Cornell’s sack of Wisconsin quarterback Jack Coan in the third quarter forced the Badgers to punt — and then their punter dropped the snap and turned the ball over to Ohio State, who scored to narrow the lead. Cornell set that up, and it’s plays like that and moments like that the Buckeyes will have to replace on the inside of the defensive line.

â€œItâ€™s just being ready for that moment,â€ coach Ryan Day said after that game. â€œAnd I thought we showed something in the second half that we could overcome a game and just impose our will on teams.”

Cornell is now gone, an under-appreciated commodity that likely won’t get selected until late in the NFL draft, if at all. He was undervalued all season at Ohio State, so it’s nothing new to him. The defensive ends certainly deserve plenty of praise, but three-technique players are essential to what Larry Johnson and the defensive staff do at Ohio State.

Jashon Cornell was able to get to the passer from the three-technique spot at Ohio State.

So with Cornell off to the NFL, who could replace him as a starter along the Ohio State defensive line? It’s tricky, because the defensive tackles on the roster aren’t quite all cut out to play that role.

Taron Vincent:Â The No. 1 defensive tackle in the class of 2018 hasn’t had a chance to live up to that potential yet. As a true freshman, Vincent played in 10 games and gained some valuable experience along a loaded Ohio State defensive line. But then a shoulder injury sidelined him for all of last season, and he was forced to take a redshirt. A year later, Vincent could have a breakout season for the Buckeyes. He was listed as limited in the three spring practices held before the shutdown, but he should be ready to go for fall camp. Can that leap be made from the three-technique spot?

Tyler Friday: His recruiting profile lists him as a defensive tackle, but Tyler Friday has developed into a solid defensive end in just two seasons at Ohio State. Cornell moved inside after playing defensive end during his Ohio State career, and he made the transition look easy. Friday is a solid 6-foot-3 and 265 pounds. He’s strong enough to move offensive linemen and quick enough to get off the ball and make plays both against the run and rushing the passer. If one of the defensive ends is going to be the answer inside for the Buckeyes, Friday makes the most sense. Would Larry Johnson slide him inside? 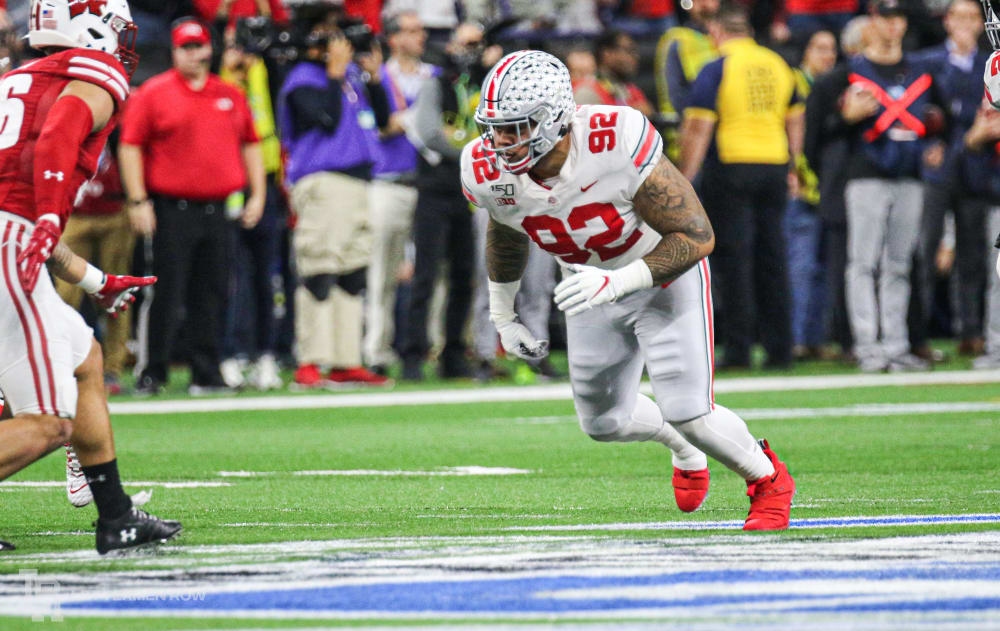 Haskell Garrett has one season left to make an impact at Ohio State. (Birm/Lettermen Row)

Haskell Garrett:Â One of the most experienced players along the defensive line, Garrett might not be the best candidate to slide over and become a 3 technique. But if the Buckeyes are desperate for one, he could make the transition. Garrett hasn’t been as productive as planned throughout his career. But with a thin defensive line in 2020, he could be one of the keys alongside Vincent and Tommy Togiai, who will likely play nose tackle. Do the Buckeyes need to test Garrett at three-technique or is he going to stay where he is?

Antwuan Jackson:Â Jackson’s path to Ohio State was as unconventional as it could have been. He began his career at Auburn after choosing the Tigers over Ohio State in a recruiting battle. After a stint in a junior college, Jackson committed to Ohio State and joined the program in 2018. He appeared in all 14 games last season and joined the defensive line rotation mid-way through the year. Jackson finished the season with 3.5 tackles for loss and showed he be a decent asset for the Rushmen. But can he slide over?

Maybe the Buckeyes will keep Friday on the outside and find a defensive tackle to take over at the three-technique spot. But there’s an overload of talent with the Rushmen and a shortage of pass-rushing inside players. Friday could remedy all of that. Not every defensive end can be on the field at once in that role, and Friday will be fighting Jonathon Cooper, Tyreke Smith, Zach Harrison, Javontae Jean-Baptiste and others for a rotational spot outside.

The path to playing time and a huge, expanded role seems to be there for the taking, and Friday could combine his raw ability with what he has learned about playing outside for the Buckeyes to become an interior force. It seems like too easy of a move not to happen.