COLUMBUS â€” Pete Werner is more than happy without getting any credit for Ohio State.

But he deserves more attention than he’s gotten his entire career.

And now that he’s playing his best football of his Buckeyes career, Werner needs to be in the All-Big Ten — and maybe All-American — conversation.

Following an impressive three-game stretch to begin the year, Werner was even better in a 42-35 win over Indiana inside the Horseshoe on Saturday. Werner tied for the team lead with eight tackles. He also had a sack on Indiana quarterback Michael Penix. And he forced a fumble near the goal line to stall an Indiana drive and give the Buckeyes the football back.

The Buckeyes defense certainly wasn’t perfect Saturday, but the star was Werner, who continues to quietly dominate both on the stat sheet and on plays that don’t show up there.

The steady senior linebacker played one of his best games Saturday, but he wasn’t the only Ohio State player to help his own cause in the top-10 win over Indiana. Lettermen Row has others who made an impact that could help them in the future. 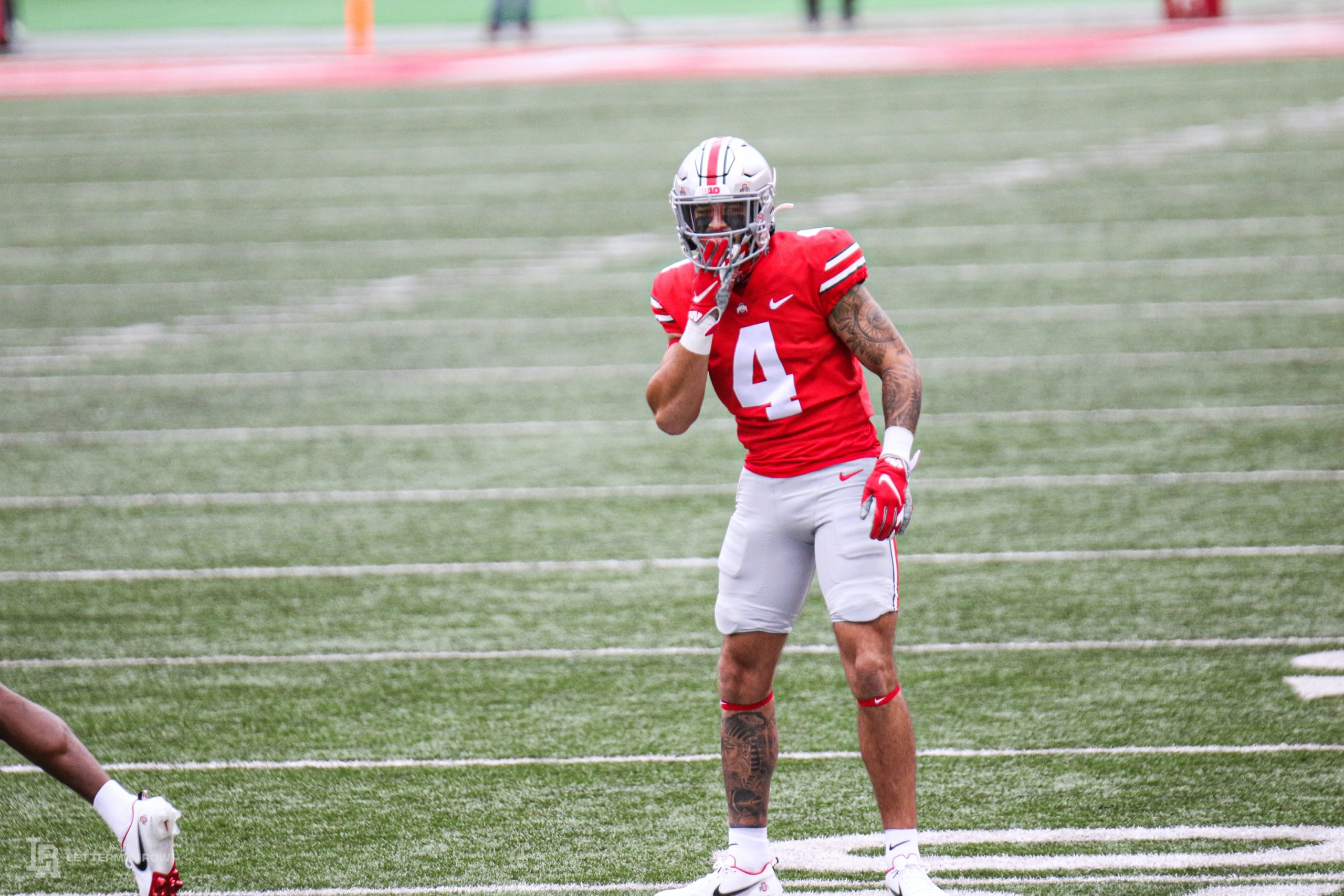 Julian Fleming came up with a big play for Ohio State on Saturday. (Birm/Lettermen Row)

Sometimes, one play can catapult a player. Maybe that’s what could happen for Julian Fleming, especially after his drop that could have been a touchdown against Rutgers two weeks ago.

Fleming didn’t have a catch or an offensive statistic in the Buckeyes win this week against Indiana, but his massive play in the third quarter was a true difference-maker. Justin Fields threw an interception at the Buckeyes 40-yard line, and Indiana defensive playmaker Jamar Johnson returned it 24 yards to the Ohio State 16-yard line to set the Hoosiers up with excellent field position. Except it didn’t. The five-star Fleming hustled into the play, tracked Johnson down, made the tackle and stripped the ball away. Ohio State recovered the fumbled interception, giving the Buckeyes the ball back and killing the good field position for the Hoosiers. Fleming showed his ability to make plays for the Buckeyes, even if it wasn’t a show-stopping catch.

Baron Browning’s performance against Indiana was arguably the best of his career at Ohio State. Browning had eight tackles, seven solo, and he seemed to be in on the action on every down near the line of scrimmage or in pass coverage. The Ohio State front seven gave up just 16 rushing yards between the two Indiana running backs — and negative-1 yards rushing as a team. Ohio State dominated the run game on both sides of the ball, but taking the Indiana running attack out of the equation was huge for a struggling Buckeyes defense. And make sure not to forget his fumble recovery inside the red zone to stifle a promising Indiana drive. Browning had one of his best days against the Hoosiers. 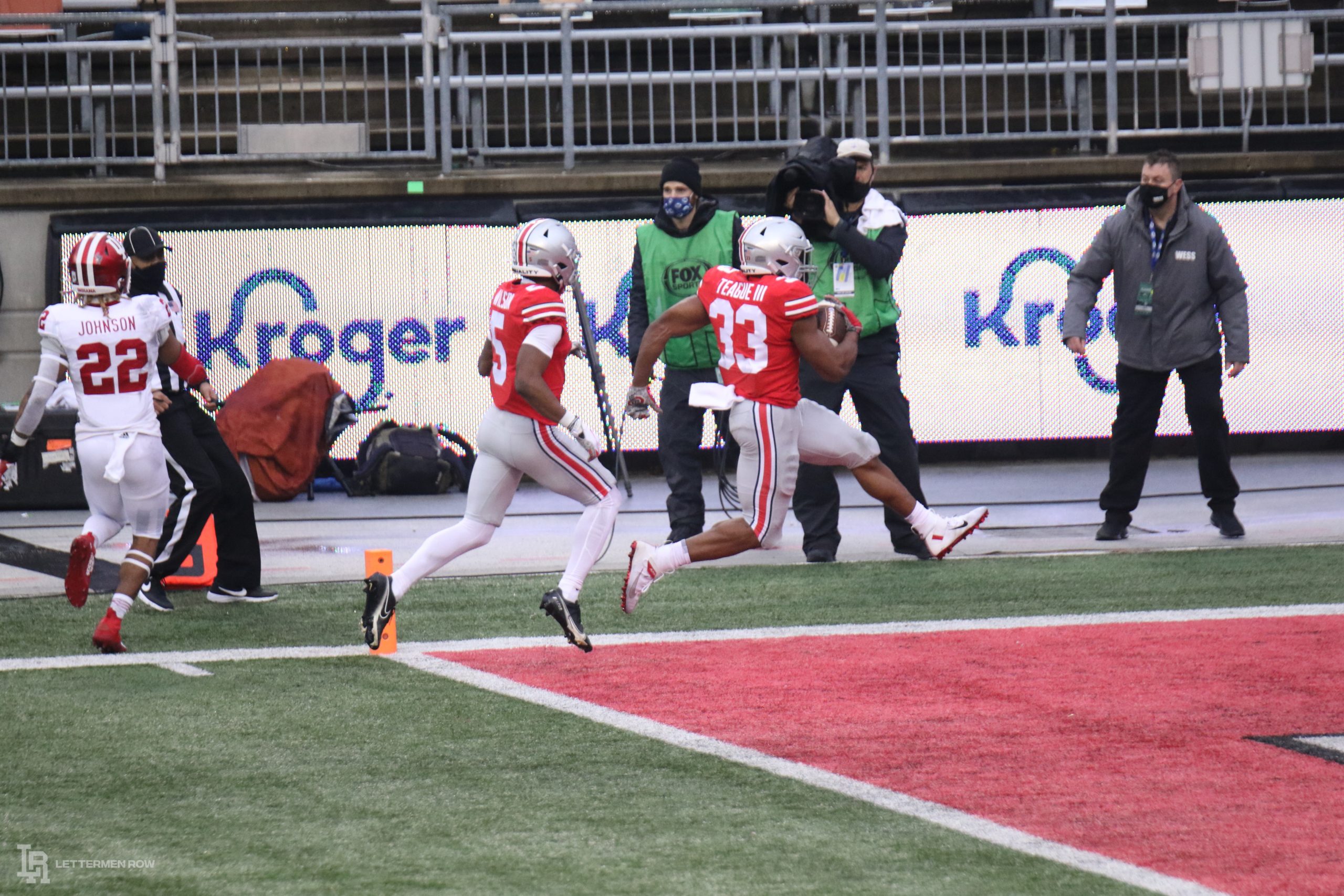 Ohio State running back Master Teague carried the load for the Buckeyes against Indiana. (Birm/Lettermen Row)

As the Buckeyes passing attack struggled to generate big plays and Justin Fields suffered his worst day of his career with three interceptions, Master Teague finally got rolling in a big way. Teague powered his way to a career-high 26 carries for 169 yards and two touchdowns to take control of the running back job and pulverize the Indiana run defense. Teague has gained momentum and continued to improve through the first four weeks of the season, and he appears to only be getting better. If the Master Teague that ran the ball against Indiana is what Ohio State will have the rest of the season, the Buckeyes offense will be even tougher to stop than before.

The stats won’t pop out for Jameson Williams. But one play was a big one for the Buckeyes. Up just seven with under 10 minutes to play, Ohio State needed to chew clock up and hold onto the ball. On a second-down play at midfield, Justin Fields hit Williams on the sideline for a short gain. But Williams made two different Hoosiers miss and converted for a first down, giving the Buckeyes a fresh set of downs and helping melt down the clock. That’s two straight weeks that Williams has made a play for the offense, and he’s building momentum as the final stretch of the regular season draws closer.