COLUMBUS â€” Two years ago a first-time Ohio State coach handed a second-year quarterback the keys to the program.

That decision immediately made Justin Fields the leader of a bona fide national championship contender. And it solidified Ryan Day as somebody who knows exactly what to do with the most important position on his roster.

Now two years later, Fields is off to the NFL as a first-round talent, and Day has another decision to make in the quarterback room. With more than seven months until the season kicks off, the three-man race to replace Fields is about to begin for sophomores C.J. Stroud and Jack Miller, as well as a dark-horse candidate, true freshman Kyle McCord.

Whoever wins the job will again inherit a national-championship caliber roster.

“Those guys are going to roll [spring reps],” Day said. “And they’re going to get as many reps as they can. If one guy starts to separate himself early on, then he goes and runs with it. I look at the spring and the preseason as a continuation of each other. If we had 15 practices in spring, the first practice of the preseason is really practice No. 16. Usually in these situations, it takes care of itself. Somebody steps up and if they don’t, we keep rolling from there.

“The exciting thing is as these guys compete, if you can get a quarterback who can really grow and learn, then you have somebody who’s going to be in the program for a while. That’s important where it’s been hard for us because the last two quarterbacks we’ve had here, they’ve after three years, they’ve moved on to the NFL.”

Stroud and Miller both seemingly were going to enter this offseason with a leg up on McCord. Both enrolled early last year in hopes of gaining much-needed reps as freshman. What happened instead was a global pandemic that canceled spring practice, eliminated nonconference games and took away valuable reps from the quarterbacks now competing to be the starter. 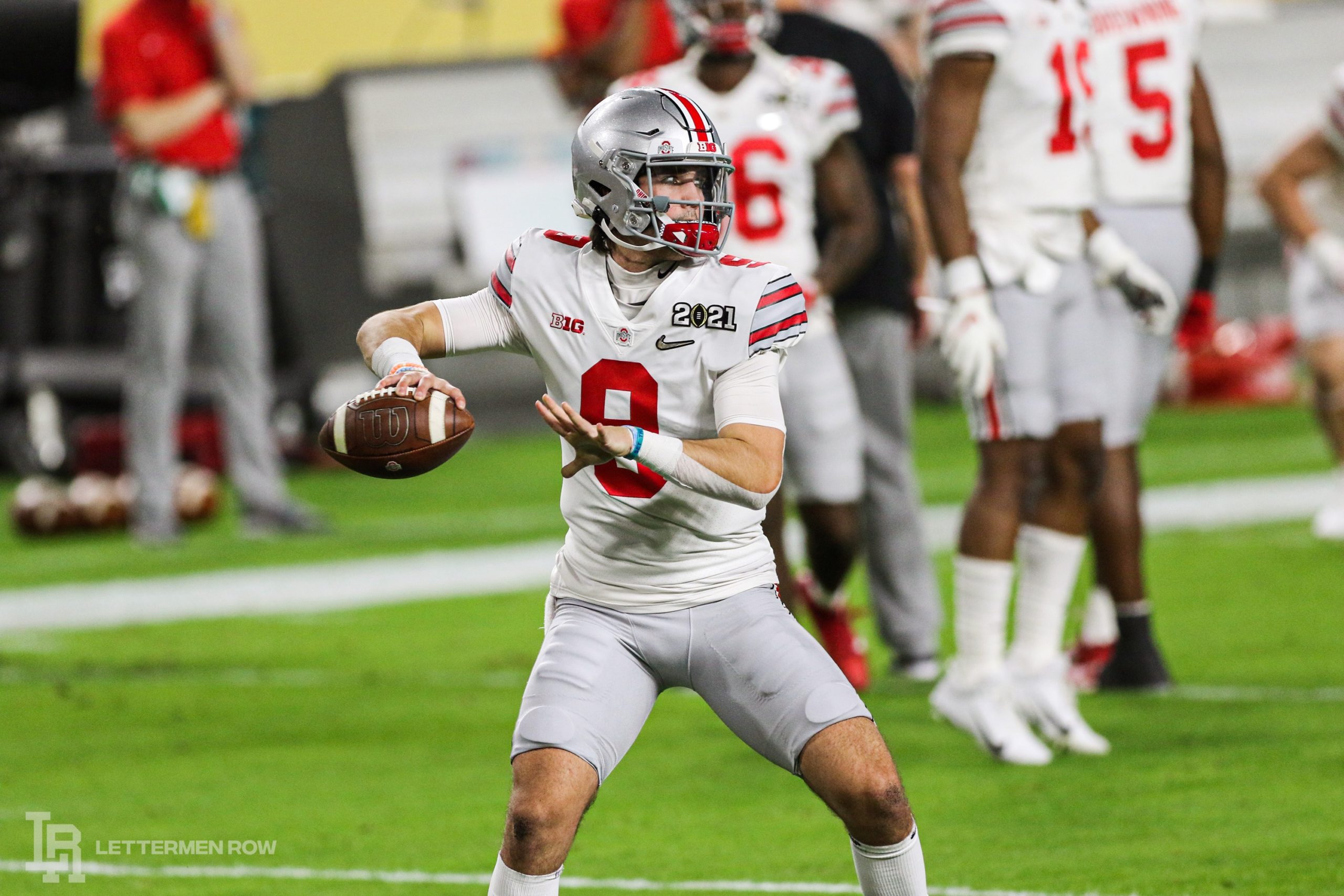 Jack Miller is in the mix to start at Ohio State. (Birm/Lettermen Row)

Miller played sparingly against Nebraska in the season-opening win and Stroud took snaps late in the season, including one in the Sugar Bowl semifinal win over Clemson. But neither attempted a pass. Between the three quarterback candidates, there are no career passing attempts at the college level. None.

So, how can the most important position on one of the best teams in the country be evaluated for the starting job — and the keys to the program?

It won’t be an easy task for the Ohio State offensive staff, especially Day and second-year quarterbacks coach Corey Dennis.

“I wish we were further along,” Day said. “I wish they had gotten more game reps. You don’t really know what you have in a quarterback until they’re playing in the game. These guys have very, very limited reps. You would have more if you had a normal spring, preseason and then a season.

“I think about two years ago, Justin was out of the game for most of the second half for the first seven or eight games. So there was a lot of snaps out there to be had. Right now, we didn’t have those snaps. I wish we were further along. We get to see them in practice every day, but really what matters is how they play. So we’re going to have to find ways this spring between C.J., Jack and Kyle, to give them as many game-like situations to figure out what exactly we got. We can’t go into that first game without knowing.” 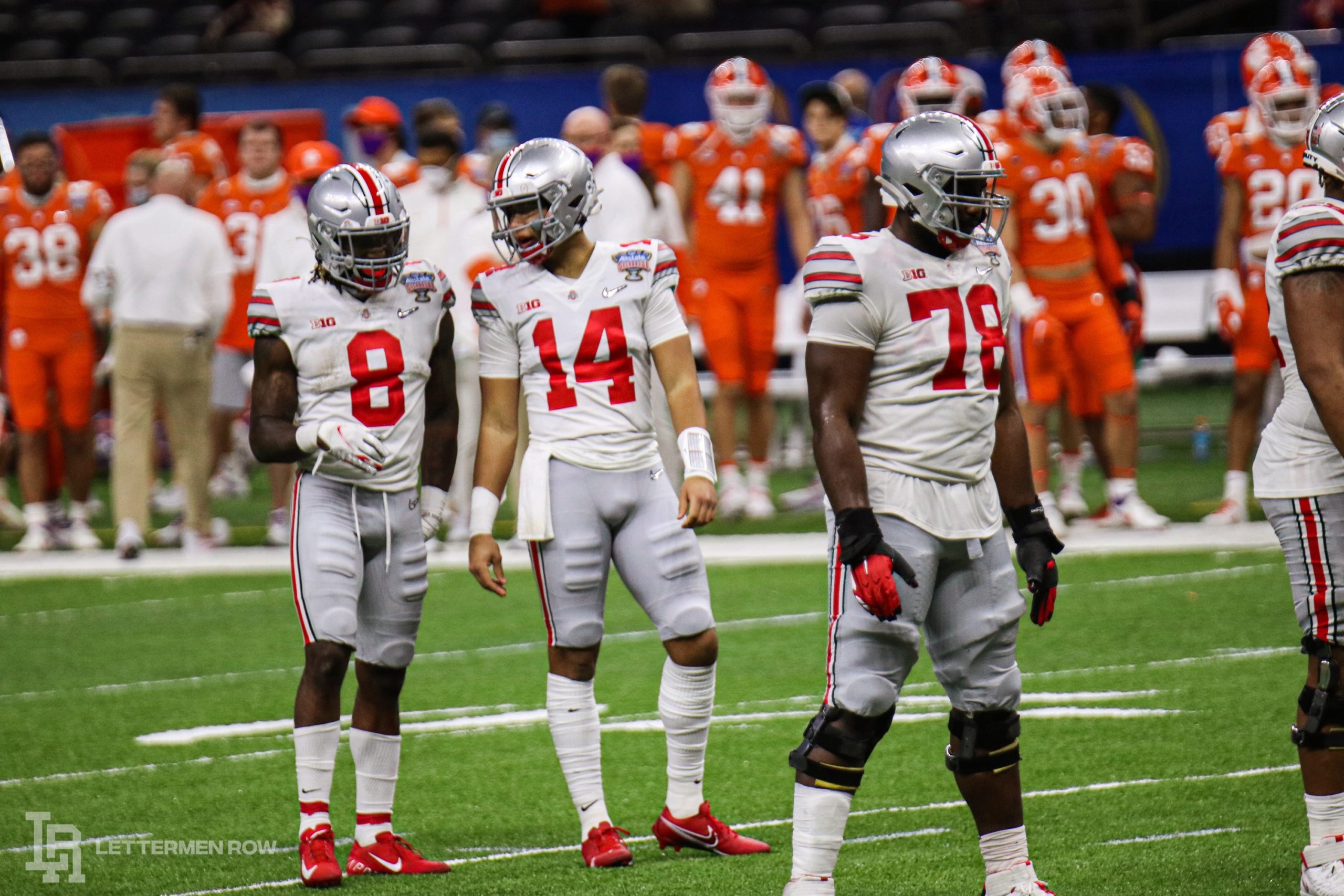 Day and the offensive staff will do everything they can to simulate game situations throughout spring practice to get a feel for who their best option at quarterback is. By no means in the cupboard bare of talent in the Ohio State kitchen. Stroud and McCord were both five-star prospects. Miller was a highly-touted four-star. All of them have talent.

But all the talent is unproven. And with no games to show for until Sept. 2 at Minnesota, practice reps are going to have to tell the tale of who wins this job and takes over for Fields.

“We’re going to roll those guys,” Day said. “Let them compete and see how they grow.”

One of them, like Fields did two springs ago, will have to grow into the leader of a national title contender.