Ohio State is one of the most decorated college football programs in the country, and 2020 should be another year for a dominant Buckeyes team. Lettermen Row is breaking down five Ohio State records that could fall in 2020. Next up: The Ohio State defensive line, which will be trying to set the program’s collectiveÂ sack mark.

COLUMBUS â€” Replacing Chase Young was never going to be an easy task for Ohio State.

Luckily for the Buckeyes, defensive line coach Larry Johnson has done this before. It’s never easy to find production after a top-five pick departs for the NFL Draft, but the Buckeyes will be just fine. They continue to reload along the defensive line.

The defensive linemen in Johnson’s room were able to watch Young work up to his record-breaking season last year, in which he had a program record 16.5 sacks in only 12 games. Plenty of defensive ends know how high the bar is set for them entering next season.

“I know our guys see that as the benchmark in terms of that’s what we want to be at those positions,” coach Ryan Day said. “But I don’t think we spend a lot of time talking about that. It’s more about maximizing yourself every day and maximizing our unit, playing with toughness, playing with effort, running to the football, because there’s a lot of areas we weren’t perfect on defense last year. We got a lot better, did a lot of good things. But we weren’t perfect as a unit.

The focus is going to be finding a way to replace those 16.5 sacks Young had last season, and it’s going to be about keeping the pace of last season’s defense, which set the school record for most sacks by a team in program history.

Nobody will likely break Young’s individual record, but the combined number from all the defensive linemen can compete for the team high. 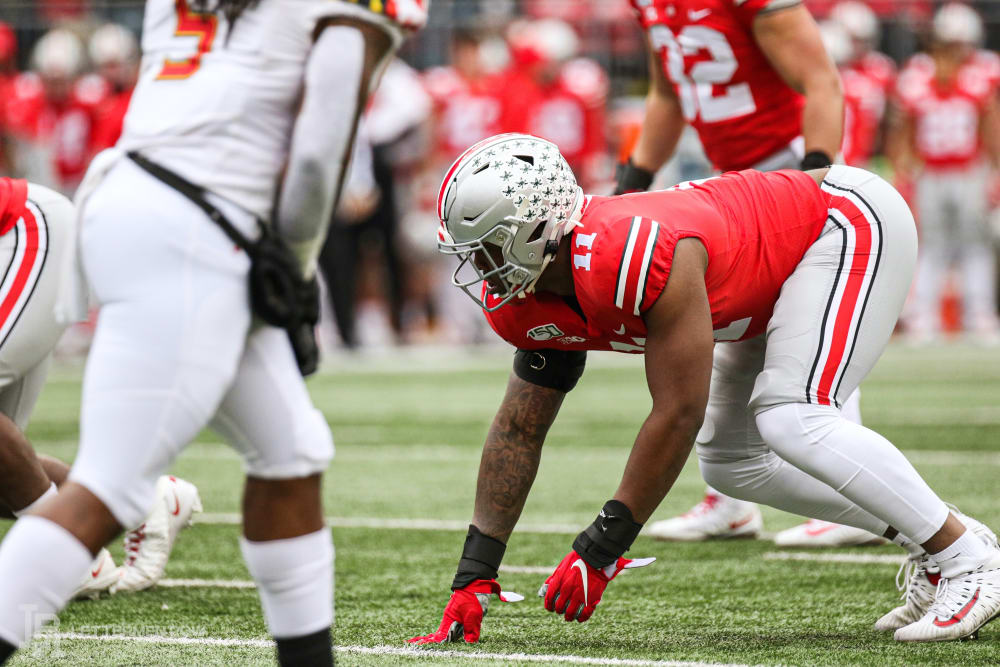 Tyreke Smith is ready for a breakout season for the Buckeyes. (Birm/Lettermen Row)

How the Buckeyes can break it:Â It’s certainly going to take a group effort for the Buckeyes to top the sack mark they established a season ago.

It all starts with redshirt senior Jonathon Cooper, who was poised for a breakout year last season before an ankle injury derailed those plans and forced him to sit and focus on next season instead. He’ll be the leader, and if he can push between 10 and 12 sacks, it’ll be a good sign that the Buckeyes can push for the record.

From there, Tyreke Smith will need to stay healthy for a majority of the season, which he hasn’t been able to do in his Ohio State career. The potential is there, and he’s been talked about as the next great Rushmen by most of his teammates. Mix in a breakout season from Zach Harrison and plenty of help from Javontae Jean-Baptiste and Tyler Friday, and the Buckeyes could be ready to break that record.

Ohio State has plenty to replace, including all-time great pass-rusher Chase Young. But if the past is any indicator, Larry Johnson has proven that he’s a good enough coach to find production when it needs replaced. There’s talent in place. Now, the record for sacks in a season might be in jeopardy.