Schedule is pretty manageable this year. Is there a team outside of Pa St, Mich or MSU that could pull an upset?

At this point, the strength of the Ohio State schedule on paper probably isn’t going to blow anybody away — but it’s probably going to wind up being more challenging than it looks. Sure, the Buckeyes are likely going to be favored in every game with the possible exception of Penn State getting to host another Whiteout this year, but there are a handful of matchups that could prove more difficult than expected.

For starters, that’s a tribute to the rise of the Big Ten and the success of some quality new coaches around the league. Both Purdue and Maryland appear to have connected with home-run hires in Jeff Brohm and DJ Durkin, respectively, and both of those programs will get to play the Buckeyes at home this season instead of the Horseshoe. Perhaps it’s expecting a bit too much for either the Boilermakers or Terrapins to develop into legitimate contenders in the conference and there is still a clear talent gap between them and Ohio State, but there just aren’t many true freebies on the road in the Big Ten right now. 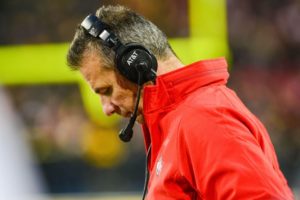 Obviously Urban Meyer isn’t going to have to work too hard to convince a bunch of veterans who lived through the embarrassment last fall at Iowa about the importance of focus on the road, and that experience should help since Ohio State knows exactly how much that lost cost it when it came to the College Football Playoff. The visits to Penn State and Michigan State would naturally get the attention of the Buckeyes, but it will be just as important for them to be locked in at Purdue and Maryland if they’re going to defend the conference crown.

The other opponent that jumps out as one to be wary of this season? It has to be TCU in Week Three. Ohio State tends to make itself pretty comfortable down at AT&T Stadium, and with its huge fanbase, it should be able to really make it a neutral-site environment despite playing in the backyard of the Horned Frogs. There are some legitimate questions about the TCU roster heading into the season, but Gary Patterson is one of the sharpest coaches in the game and has built that program to a level that demands respect each and every season. Plus, after just a couple games that amount to tuneups for Ohio State to start the year, TCU will be the first significant test for Dwayne Haskins as he takes over with enormous expectations at quarterback.

Certainly the schedule is manageable for one of the most talented teams in the country. But that doesn’t mean the Buckeyes should expect a cakewalk — especially when they hit the road.