COLUMBUS â€” Ohio State has been waiting for Taron Vincent to capture his moment.

Now the Buckeyes are seeing exactly the kind of progress they both want and need at defensive tackle this spring.

Plenty of guys are in the mix to play nose tackle, taking over for Tommy Togiai as he enters the NFL draft. That competition to fill that gap seems to be healthy — especially because Vincent finally is at Ohio State.

“I think Taron Vincent has a chance to have a breakout year for us,” Day said. “It started off in the offseason with Coach Mick. [Vincent] was gold in the strength and conditioning this quarter for champions. His play has been excellent. He’s definitely playing his best football, and it all started in the offseason. He gave himself to Coach Mick, he got the gold and now he’s about to take off.

“If you were asking me about the most improved, I’d probably say Taron up front.”

The Buckeyes have continued to recruit the position well under legendary assistant Larry Johnson, and he’ll have no shortage of options to help pick up the slack without Togiai around. It starts with Vincent, but that’s not where it ends.

“I’m very excited about our interior defensive linemen,” Day said. “Haskell’s been out but he’ll be back soon. Then inside, Antwuan Jackson’s been playing as good as he’s played. I’m glad that he’s back for another year. Veteran guy you can count on. Jerron Cage is playing his best football. Tyleik Williams has flashed. He still has to learn how to sustain but he definitely flashes. And actually Noah Potter’s done a little bit inside for us.”

The Buckeyes prize that kind of versatility, though that isn’t likely to be the strong suit for Vincent who has long been tabbed for stardom on the interior.

Vincent’s rise to a breakout performer this spring shouldn’t surprise anyone inside the Woody Hayes Athletic Center. He was a five-star prospect when he came to Ohio State from IMG Academy. Vincent was listed as the No. 1 defensive tackle in the country according to one recruiting service. 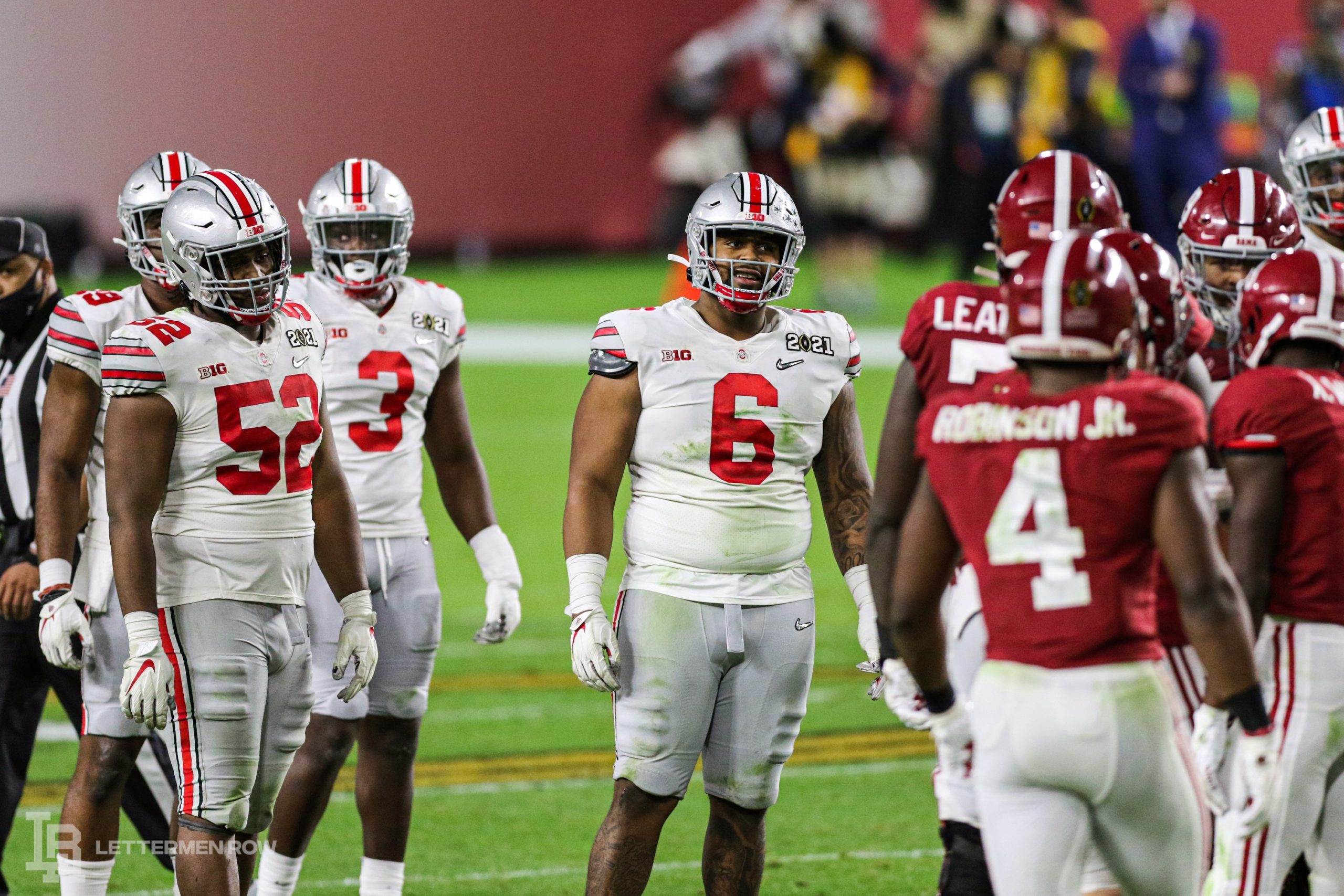 Taron Vincent has been impressive in spring camp for Ohio State. (Birm/Lettermen Row)

After appearing in 10 games as a freshman, Vincent seemed primed for a breakout as a sophomore, but he missed his entire second season at Ohio State due to injury. He was slowly worked back into practice last fall, still battling an injury that lingered into camp.

Even with all of the injury rehab and time off, Ohio State defensive line coach Larry Johnson still believed in the potential Vincent has last fall.

â€œWith the injury and being out of football for a long time, then the pandemic hit and [Vincent] couldnâ€™t practice, you donâ€™t just jump back in and get to the same level you were when you got here,â€ Johnson said. â€œThatâ€™s why weâ€™ve done a great job of developing him and getting his skill set back to where it needs to be. Being out of football for a year, itâ€™s tough for anybody to come back and be ready to go.

â€œBut I think the potential is there, no doubt about that. Now itâ€™s just about getting him ready to have the opportunity to go play in a game and play some live football. Weâ€™re working really hard to make sure that happens.â€

He was in action for four games during the shortened season last year for the Buckeyes and began to flash. But that was with little to no offseason. Vincent hasn’t had an offseason at full-strength for a long time. But that’s exactly what he had this winter.

Now with a full offseason, a new sense of work in the weight room and another year of experience, Vincent is ready to take off for the Buckeyes defensive line as it looks to replace Tommy Togiai inside.

“He has had some injuries here and there and he’s definitely matured, but I think it all started with whatever decision he made to get after it in the weight room with Coach Mick, that was it,” Day said. “Once that happened, now his game has taken off. Excited to see where it heads in the fall.”

As Taron Vincent continues to impress and stand out in spring camp, he might be ready to live to to his five-star potential.