Buckeyes ready for football facility to reopen after layoff
Aritcle written by:

With no weight room up to the usual standard of an Ohio State offensive lineman, Myers is stuck with at-home workouts being conducted hundreds of miles from some of his fellow linemen.

“I think everybody is doing the best they can,” Myers said last week on a conference call with the media. “I’m fortunate to have a pretty good amount of weights to where I can do everything I need to do in the weight room. Maybe not quite as good as Ohio State’s weight room, obviously, but I’m still able to get a good bit done.”

That’s about to change.

The NCAA lifted its moratorium on voluntary workouts inside athletic facilities this week. Ohio Gov. Mike DeWine has been slowly re-opening Ohio, including gyms and workout areas. Both of those lifted bans have paved a way for Ohio State to return to the Woody Hayes Athletic Center beginning June 8.

There will certainly be extra precautions taken in order to ensure the safety of Ohio State student athletes. But the opening of Ohio State’s facilities is the latest development in the shifted thinking that college football could return as scheduled in early September.

“I know one thing they’ve been huge on if we did come back is having no more than a group of 10 guys at a time,” Myers said before the June 8 date was announced. “Unfortunately, we’d have to work out at any time of the day. It could be 6 a.m., maybe even 5 a.m. to fit everybody in — who knows, maybe all the way until 8 p.m. So that’ll be a different dynamic.”

But whatever the Buckeyes need to do to work their way back into the team facility and return from their individual homes to some form of normalcy, they’ll do. The athletic department has been examining how to open the football facility in a safe and smart manner. Myers was correct. The weight room capacity will be much smaller than it normally is. 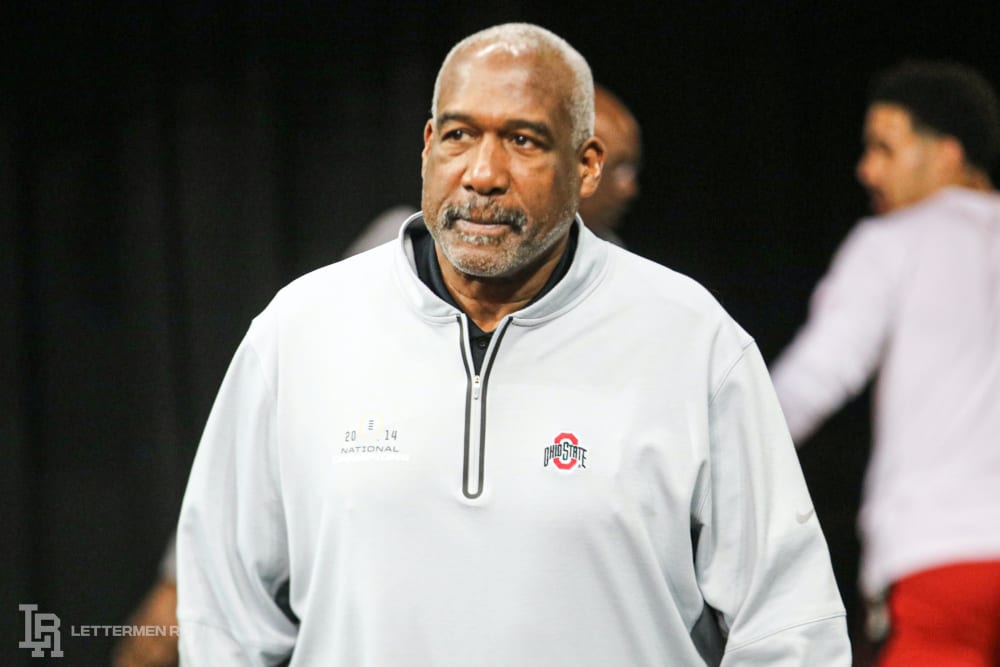 Gene Smith spoke to the media on a conference call this week to update return-to-play models. (Birm/Lettermen Row)

That’s just the way it has to be under the circumstances. And athletic director Gene Smith is confident that the Buckeyes can find a way to be ready for a season this fall while maintaining proper safety guidelines and protocols.

â€œStudent-athletes will have to sign up, theyâ€™ll have to go through protocols â€” not testing. But theyâ€™ll go through protocols with temperature checks and things of that nature, and we have all the hygiene and sanitation requirements,” Smith said on a conference call. “So, basically X number of players will work out, nine or 10, theyâ€™ll disappear, the room will be cleaned and then another group will come in and work out. Then the room is cleaned.

“So, we think between the two facilities [Woody and Schumaker Complex] over the course of a day, we can host the 50 athletes [in the area].â€

Football isn’t the only sport that can return to the voluntary workouts. Men’s and women’s basketball and volleyball can also return to workouts. So the football program will have to concede at least some time in the weight room to the other teams. But the football team is much larger, and although the workouts are voluntary, many players will likely be back to work out.

Those in the football program have a level of trust built up with the athletic department and those decision-makers who are allowing them to return to the weight room inside the Woody Hayes Athletic Center.

“I could speak for everybody on our team that we trust the coaches, we trust medical staff and we know they’re going to do right by us by keeping us safe and also getting the work in that we need to get in,” Myers said.

The best workout available to Myers right now is in his home, isolated from his teammates he normally spends nearly all hours of the day with. But beginning June 8, those workouts can begin to feel somewhat normal again.

At least they’ll be in a normal setting.