Wyatt Davis building toward another All-American season for Buckeyes
Aritcle written by:

He enters this season with All-American honors already captured in his first year as a starter, a first-round draft grade for next year and sky-high expectations.

He didn’t have to come back to Ohio State. After starting just 16 games in his college career, including all 14 in last year’s College Football Playoff run, Davis put himself in a position to make a decision about his future. He chose to stay for another year at Ohio State before he even saw the feedback from the NFL Draft.

With individual accolades already in hand, what can Davis do for an encore to bump his draft stock and help the Buckeyes win a national title? More of what he’s been doing.

“The best thing about Wyatt, the thing that he did best and why everyone is talking about him is because he’s physical,” Ohio State offensive line coach Greg Studrawa said on a conference call last week. “He tries to destroy people. He doesn’t try to just position block or just get the job done. He wants to try to destroy you physically, every single play that he’s in there.”

Destroying defensive players is certainly what the offensive linemen should want to do. And Davis makes it look easier than most interior offensive linemen. Maybe that’s why he was second on the team in knockdowns last season; the only linemen to top him was Jonah Jackson, who was just selected as a third-round pick in last month’s draft to the Detroit Lions. 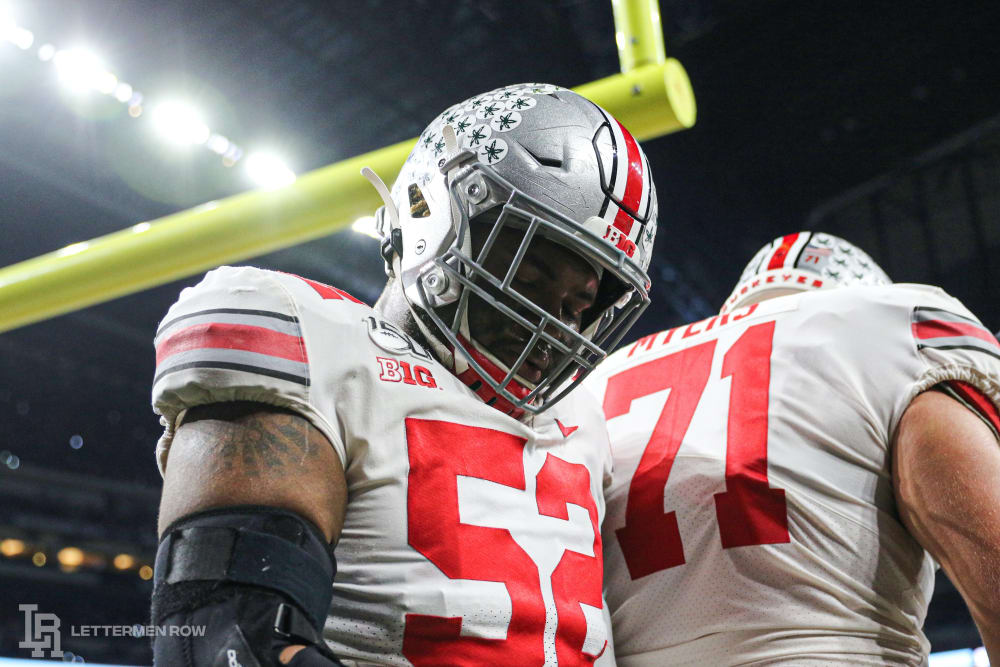 Wyatt Davis can be an All-American for Ohio State. (Birm/Lettermen Row)

Although Jackson won that competition, Davis didn’t make it easy.

â€œI think I finished the season with 79,â€ JacksonÂ saidÂ at the NFL Combine. â€œThey might have short-changed me a little bit. I donâ€™t think they counted the Clemson ones. Yeah, I was proud with the 79. [Davis] was right there with me. He had a couple more that looked more impressive that they called for him, so I was a little jealous.â€

While Davis was mauling defensive tackles and destroying everyone he could, he was able to make a now-NFL guard jealous of his ability. That ringing endorsement makes Davis a no-brainer to appear on preseason All-American lists, and it puts the Buckeyes in a great position to capture the Joe Moore Award, given to the country’s top offensive line.

Back for another year with Davis are Thayer Munford and Josh Myers. But the NFL scouts seem to be salivating over Davis. The scary part, though, is Davis is still trying to get better.

“While [wanting to destroy people is] a blessing, it’s a curse too, at times,” Studrawa said. “Sometimes, he gets outside the framework of his technique. Sometimes in pass protection, he tries to be a little too aggressive and they get him off-balance, they get him out of whack. We’re trying to keep the same mentality that he has physically and then just trying to fine-tune and perfect his technique so he stays within the framework of the technique he needs to be a good offensive linemen — while keeping the physical play.”

It’s a good problem to have. Calling an offensive linemen too physical can seem tongue-in-cheek, but Studrawa sees room for Davis to improve as he aims to become the first Ohio State offensive linemen since Billy Price to capture two All-America honors.

With more experience and another season of domination along the offensive line, Wyatt Davis could enter next offseason as a first-round draft pick after leading the Buckeyes to a title.