He doesn’t need an exact number of targets, catches or touchdowns to be happy in the Ohio State offense. The Buckeyes score points and win games whether Ruckert is the benefactor or not.

The former five-star and now member of the John Mackey Award watch list for the country’s top tight end is content with winning games and worrying about personal stats after.

“I’d rather put a big ring on my finger than have 20 touchdowns,” Ruckert said at Big Ten Media Days last week.

“So that’s what we’re working for. If that’s what they need me to do, I’m willing and I think I’m able. I’m working towards that. Whatever they want me to do, I’ll do. But really this year, I came back for one reason. And that’s just do everything I can, whether it’s make catches, make blocks, playing special teams, whatever it takes to get back to where we were last year — and hopefully win it.”

As he takes the team-first approach that has allowed him to climb to a leadership post in the Buckeyes locker room, Ruckert knows how valuable he can be to the offense, especially as it breaks in a first-year quarterback.

Although he doesn’t care about personal achievements and accolades, he still can be confident knowing what he brings to Ohio State as a weapon.

“I don’t have many catches, but when I do, something good usually happens,” Ruckert said. “I take pride in that, and that’s what I work for every single day. That’s why we do what we do. It’s the same thing in the blocking game, in the run game, the pass-protection game. Any single thing you do can affect your whole season. So, I play every play like it’s gonna be my last, like my season’s on the line — which it really is.”

What makes Jeremy Ruckert so special? Why should he be the favorite to be the first Buckeyes tight end to win the Mackey Award, which has been given annually since 2000 but never to an Ohio State star? Lettermen Row is breaking down what gives Ruckert a chance to be the first to take home the prestigious tight end award.

There’s a reason Jeremy Ruckert was the No. 1 tight end in the country coming out of his Long Island high school: He is an elite pass-catcher. After playing wide receiver before arriving with the Buckeyes, Ruckert learned to become a complete tight end in college. But that hasn’t hindered his ability in the passing game. Maybe the most evident example was in the two College Football Playoff games last season, when Ruckert had two touchdown grabs in the semifinal against Clemson and an unbelievable one-handed snag in the national title game. Ruckert elevates the Ohio State offense as a pass-catcher, making him one of the best tight ends in the country, just like he was coming out of high school. 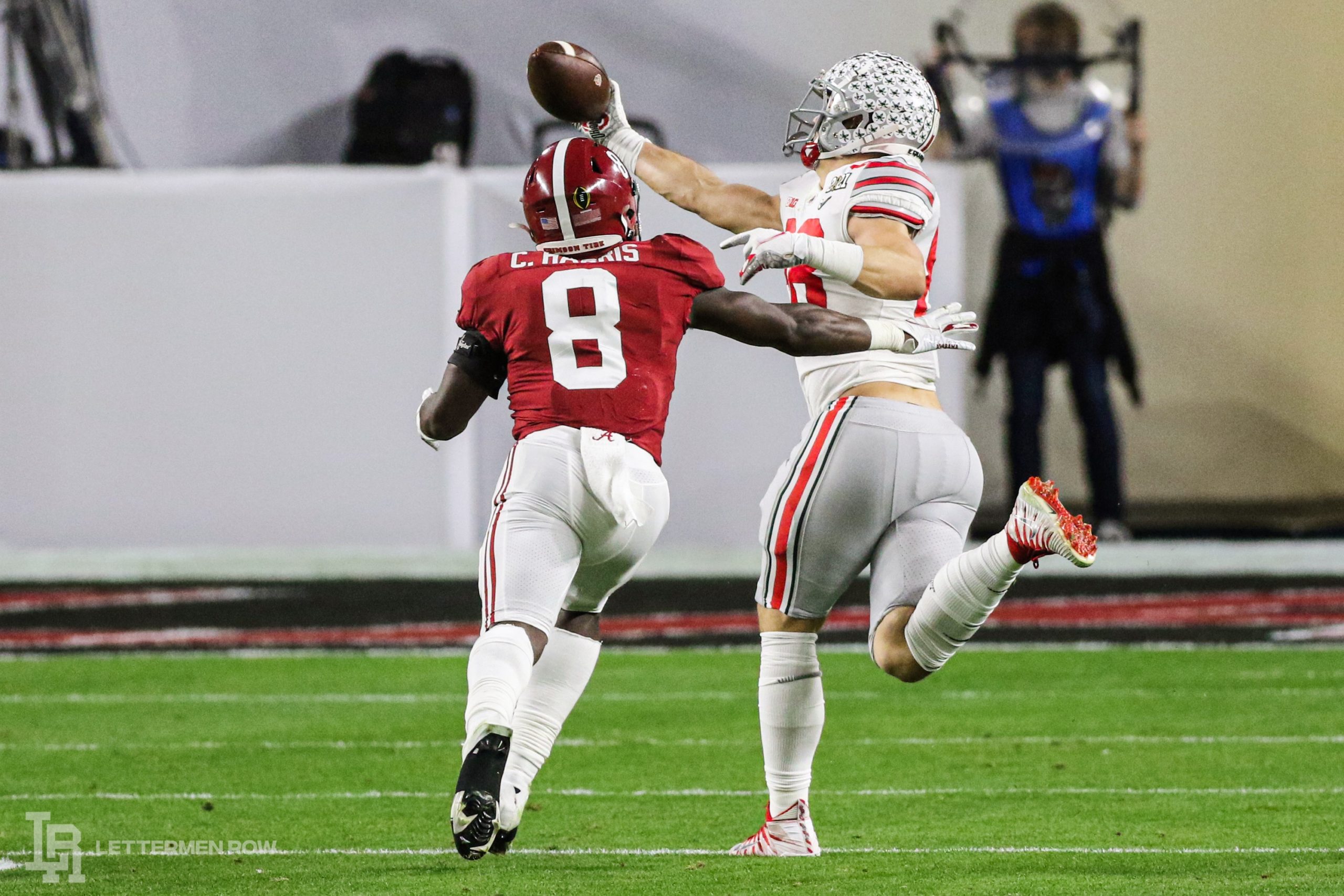 Jeremy Ruckert had a highlight-worthy catch for Ohio State in the national title game. (Birm/Lettermen Row)

Jeremy Ruckert did not arrive at Ohio State as a run-blocking tight end. But to play for the Buckeyes, all tight ends need to be able to block at the line of scrimmage and help the run game. With teaching from offensive coordinator and tight-end guru Kevin Wilson and teammate Luke Farrell, Ruckert has quickly became one of the best blocking tight ends on the Buckeyes roster. He can open lanes on the inside of the offensive line. He holds his blocks and allows Ohio State to run the outside zone play it loves to expose defenses with. He is more than a capable body in the running game. Ruckert has become a force, and not just when it comes to catching the ball.

Luke Farrell was the leader of the Ohio State tight end room for the first three years of Jeremy Ruckert’s college career. But Farrell graduated and left for the NFL after last season, becoming a draft pick to the Jacksonville Jaguars. With the leadership void left by Farrell, Ruckert has stepped in and assumed that role — and done it well so far. Farrell helped Ruckert become a complete tight end. Now Ruckert is returning the favor to younger players on the roster, leading the unit and becoming a prime candidate to be named a captain of the Ohio State offense by his teammates. Ruckert has improved as a pass-catcher and run-blocker. He has also taken on a leadership role, which may prove to be even more valuable for the Buckeyes offense this fall.