So even in a pandemic-shortened spring, Ransom didn’t have the chance to make that first impression with the early-enrollees. He showed up for the Buckeyes in June, and he also wasn’t given the chance to make an impact in blowout nonconference games.

Yet when the Buckeyes needed their defensive backs the most in the Sugar Bowl semifinal win over Clemson, Ransom was on the field making key plays for the secondary that struggled all year. He flashed.

His late-season surge was unexpected by many. But that seems to be just the beginning of a breakout coming for the second-year defensive back from Arizona. He’s making moves up the depth chart again this spring. The praise Ransom is drawing through the spring starts at the top.

“He really came on for us and played well,” Ohio State coach Ryan Day said. “Especially in the semifinal game against Clemson, really competed. He showed that he could do that in practice. Because of that, he had an opportunity to do it. It was hard this year we just didn’t have a lot of those games where we could throw some of those guys in there and find out.

“When he was in the game, he hadn’t done a whole bunch leading up to the end of the year, so to see him play like that was very encouraging.”

Ransom has since continued to show encouraging signs, using that breakout performance against Clemson as a springboard to a heavier load in the backend this spring. Ransom can play anywhere in the secondary, and he seems to have already picked up on what it takes to play at a high level for the Buckeyes.

And his development is far ahead of schedule, especially for a player who didn’t have a normal freshman year with time to settle in. For Ransom, trial by fire in the Big Ten title game, Sugar Bowl win and national championship game worked well. 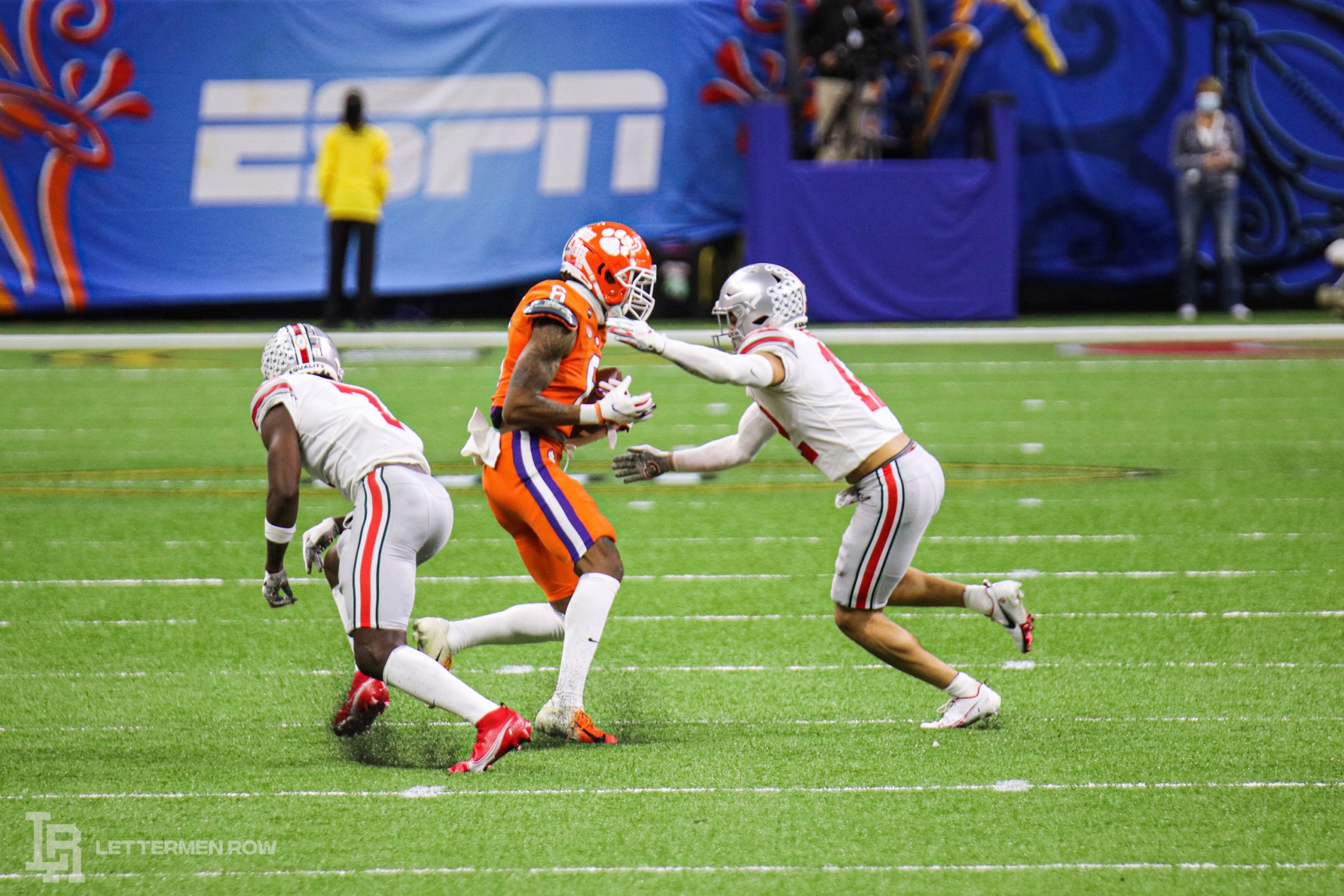 Lathan Ransom made his way onto the field in the Sugar Bowl for Ohio State and excelled. (Birm/Lettermen Row)

“He’s actually developing pretty fast,” Ohio State starting safety Josh Proctor said. “He’s going to be a guy a lot of people are going to hear about next year. Even after last year, yeah he played a bit at the end of the season, but I feel like that kind of boosted his confidence. He came into this offseason also proving stuff with that chip on his shoulder wanting to be better.”

Now with big-game experience, Ransom can go through his first spring practice sessions with plenty of confidence in his ability. And he can begin to carve out a role in the Buckeyes secondary, one that was historically bad by Ohio State standards last season and needs to bounce back in a big way.

Where does Ransom fit into the system? As long as he’s available, he’ll be on the field. That could be in a safety role. Maybe slot cornerback. Wherever the Buckeyes need him, Ransom now has proven his ability. And his role is set to expand with other veterans, notably fellow slot cornerback Marcus Williamson, looking to correct what went wrong a year ago.

“Lathan is a guy that came in more ready than I’ve seen a lot of defensive backs,” the fifth-year senior Williamson said. “He has a very professional mindset about how he approaches the game. He’s always asking questions, and we’re able to bounce things off each other. I’m not sure how it’ll work out this season. I’m sure the coaches have a plan. I’ve been really impressed with the steps Lathan has taken and how eager he is to learn and get better. It’ll be up to the coaches how that works out.

“But his skillset is something that can be used and needs to be used.” 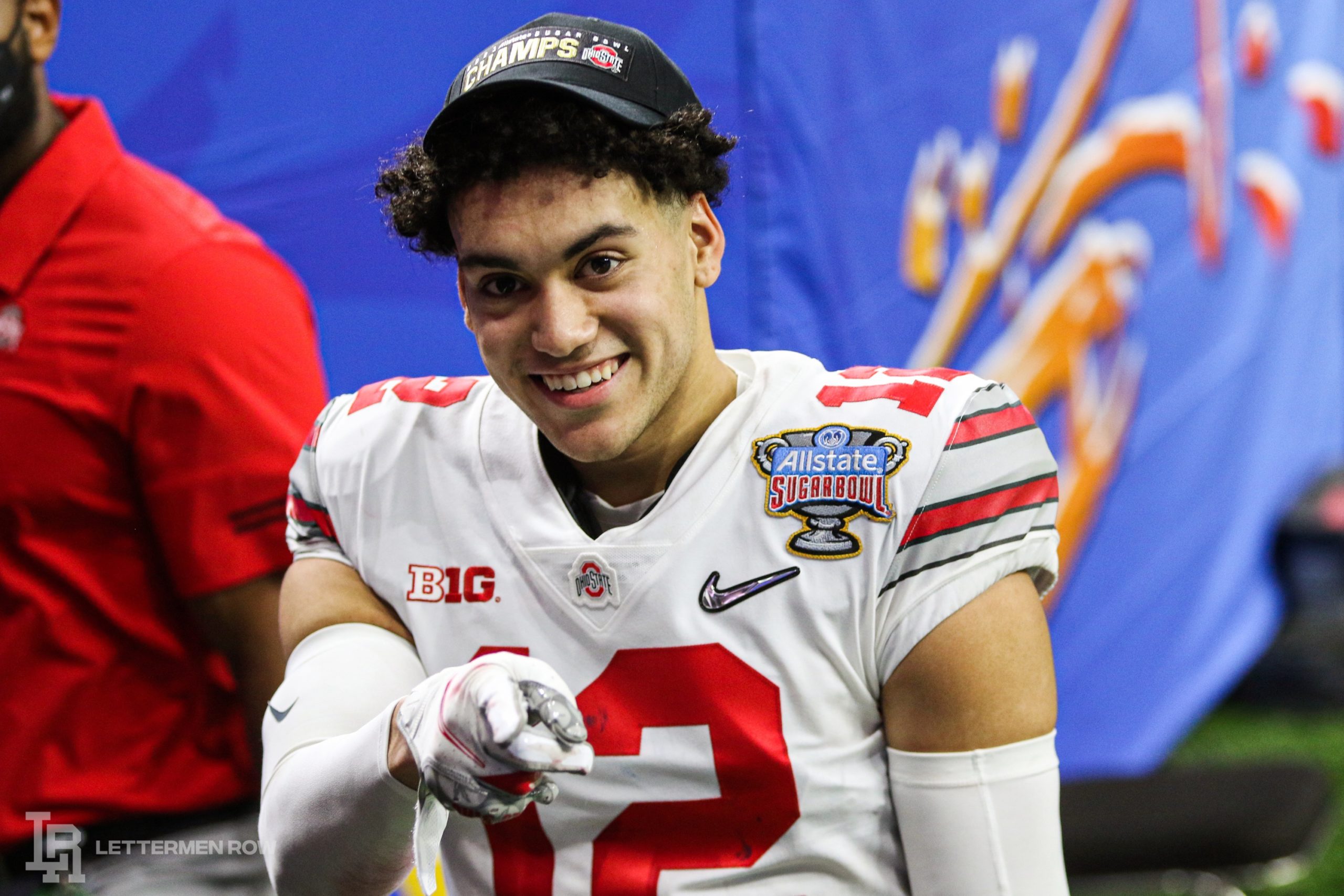 Ohio State safety Lathan Ransom has showed up in key moments for the Buckeyes. (Birm/Lettermen Row)

Ohio State defensive coordinator Kerry Coombs and the Buckeyes coaching staff realized that as the season went on last year. When Ransom was on the field, the Buckeyes secondary was better at times. Ransom isn’t the only answer to the problems that plagued the back end a year ago.

But with experience and more time to develop, Ransom will be one of the big answers.

â€œLathan stepped up in a big way late,” Day said. “Proctor really flashed at times. Thereâ€™s some guys back there that have done some things, but they werenâ€™t as consistent or didnâ€™t play as much as some other guys during the season. So, really want to see how that backend starts to shake out as some new faces get in there. Corner is a real big position for us. We have Sevyn coming back, which is great, but also we need to build some depth there. Thereâ€™s a lot of young faces in the backend.

“I think weâ€™re off to a great start with what weâ€™re doing.”

Ransom began his career with low expectations for his freshman year after not enrolling early and battling through a weird fall. He managed to find his way onto the field and prove he can make an impact early.

He flashed against the best competition last season. He’s already showing more of that this spring, and the praise is coming from every direction.

Now Lathan Ransom can show that praise is warranted.