Ohio State had an incredible season last year on its way to the national title game, where it beat Clemson in the semifinal and fell short against Alabama. Many of the key players from that team moved onto the NFL. Who could step in to make plays similar to what the former Buckeyes made last season?Â Lettermen Row is breaking down key plays and who could make them. Last up: How the Buckeyes can replace the magical, Heisman Trophy-level play of Justin Fields at quarterback.

One of them? The Buckeyes need to replace one of their all-time talents in Justin Fields. That won’t be easy.

Of course, the other is a good problem to have. The Buckeyes have three incredibly talented signal-callers in the offensive meeting room hoping to take over for Fields. The issue with that: Only one of them can start on Sept. 2 against Minnesota.

The quarterback battle at Ohio State was never going to be wrapped up after the spring, and it’s a position fight that’ll go into training camp in August.

Ohio State was able to see all three quarterbacks, C.J. Stroud, Kyle McCord and Jack Miller, in action throughout the spring and on the Ohio Stadium turf for the spring game. Nothing was settled in that time-frame. 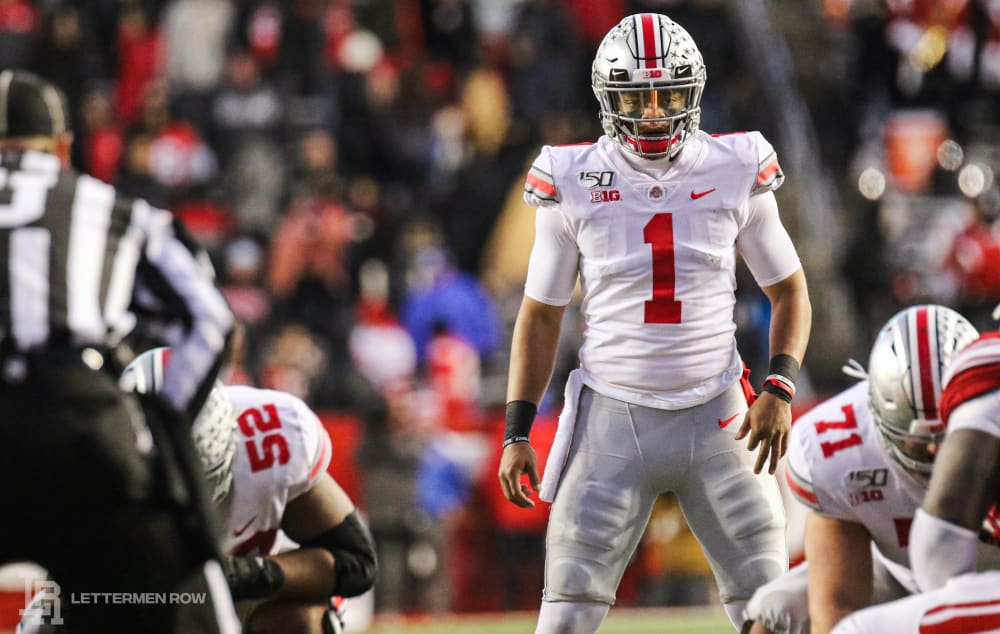 Justin Fields is one of the best quarterbacks in Ohio State history. (Birm/Lettermen Row)

So the race to replace Fields will stretch into the fall.

â€œThis was just a very small glimpse at a bunch of guys taking some reps,â€ Ohio State coach Ryan DayÂ saidÂ after theÂ spring game last month. â€œThereâ€™s a body of work that needs to be built from that first spring practice all the way through the first game thatâ€™s still yet to be written. Theyâ€™ve learned a lot, but now the race is on over the next few months to see who can make the next stride so theyâ€™re further along. Spring has been good, but thereâ€™s still a long way to go before Minnesota.â€

With a little more than 100 days until kickoff in Minneapolis in September, Lettermen Row is breaking down the candidates and picking a starting quarterback for the Buckeyes season-opener.

C.J. Stroud: The former five-star prospect from California wasn’t always a highly-rated gem in his recruiting class. C.J. Stroud was a three-star standout for a while before winning the Elite 11 Final and skyrocketing up into five-star territory. Stroud enrolled early last season but didn’t have a traditional spring, summer or fall to develop. Even with the natural setbacks last year presented, Stroud appears to be the leading candidate to start against Minnesota in September. He has the size, speed, accuracy and skill to lead the Buckeyes back to the national title game. Stroud seems to have the lead entering summer. Can he hold onto it and win the job for good? 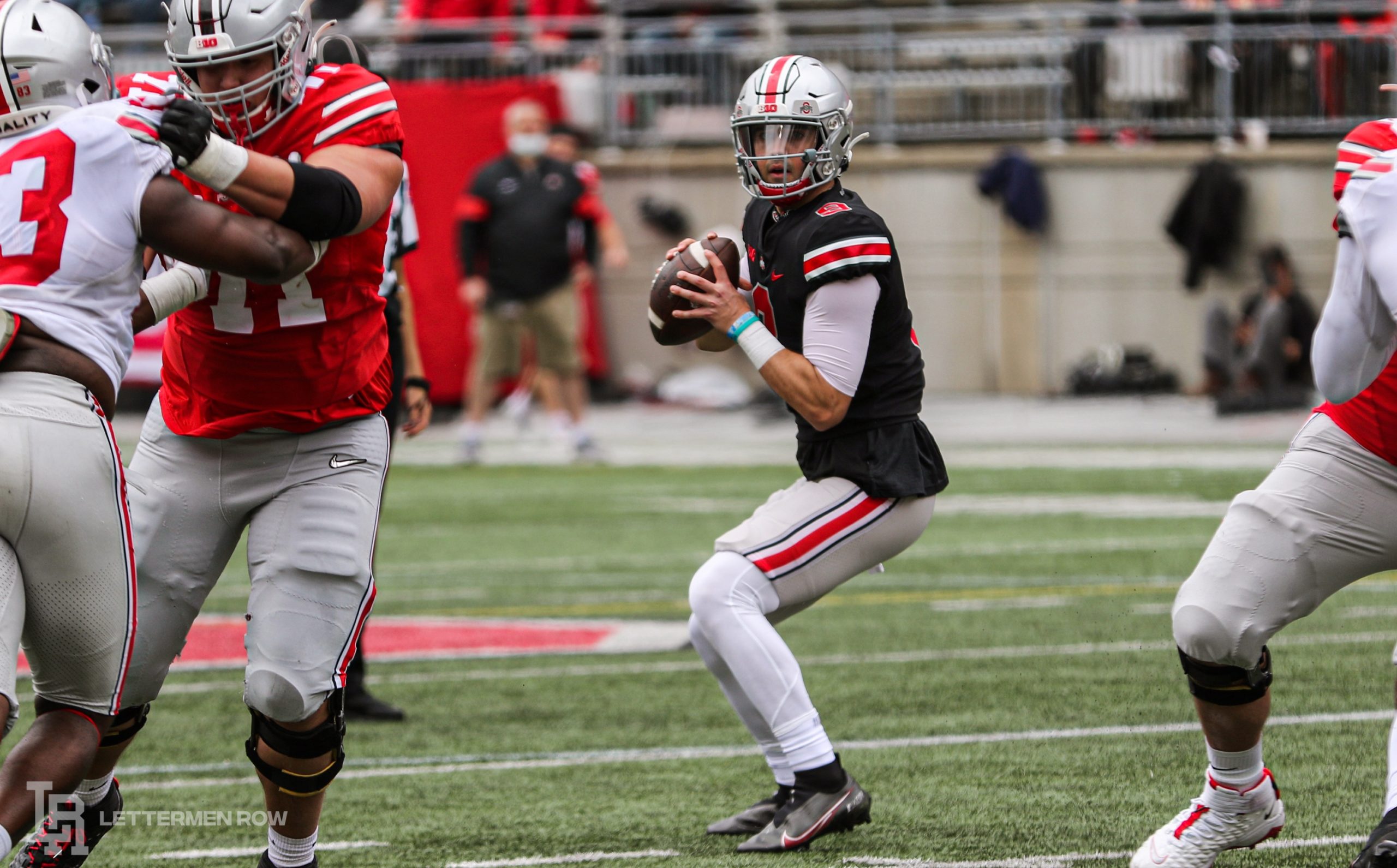 Jack Miller is in the mix to be the starting quarterback at Ohio State. (Birm/Lettermen Row)

Jack Miller: Ohio State signed two elite quarterback prospects in the class of 2020. Jack Miller and C.J. Stroud knew they would be competing against each other for the starting job this spring, and they both still stuck with their Buckeyes commitments. Now that battle is playing out on the practice field. Miller, a former four-star from Arizona, possesses a big frame and a big arm. He certainly has the tools to be a starting-caliber quarterback at Ohio State. But Stroud is the leader entering the summer. Can Miller make up ground in the fall and land the starting quarterback job?

Kyle McCord: The youngest of the three candidates, five-star Kyle McCord enrolled early this spring for a crack at the starting job. McCord has been one of the top quarterbacks in his class since the rankings started, and he is already proving why. The freshman quarterback has an elite arm and frame to go with the other skills that make him a special prospect. He is a year behind Stroud and Miller in the Ohio State offense, so he has plenty of ground to make up. Can he overcome that and win the starting job? He may have the highest ceiling of any of the three quarterbacks in the room. 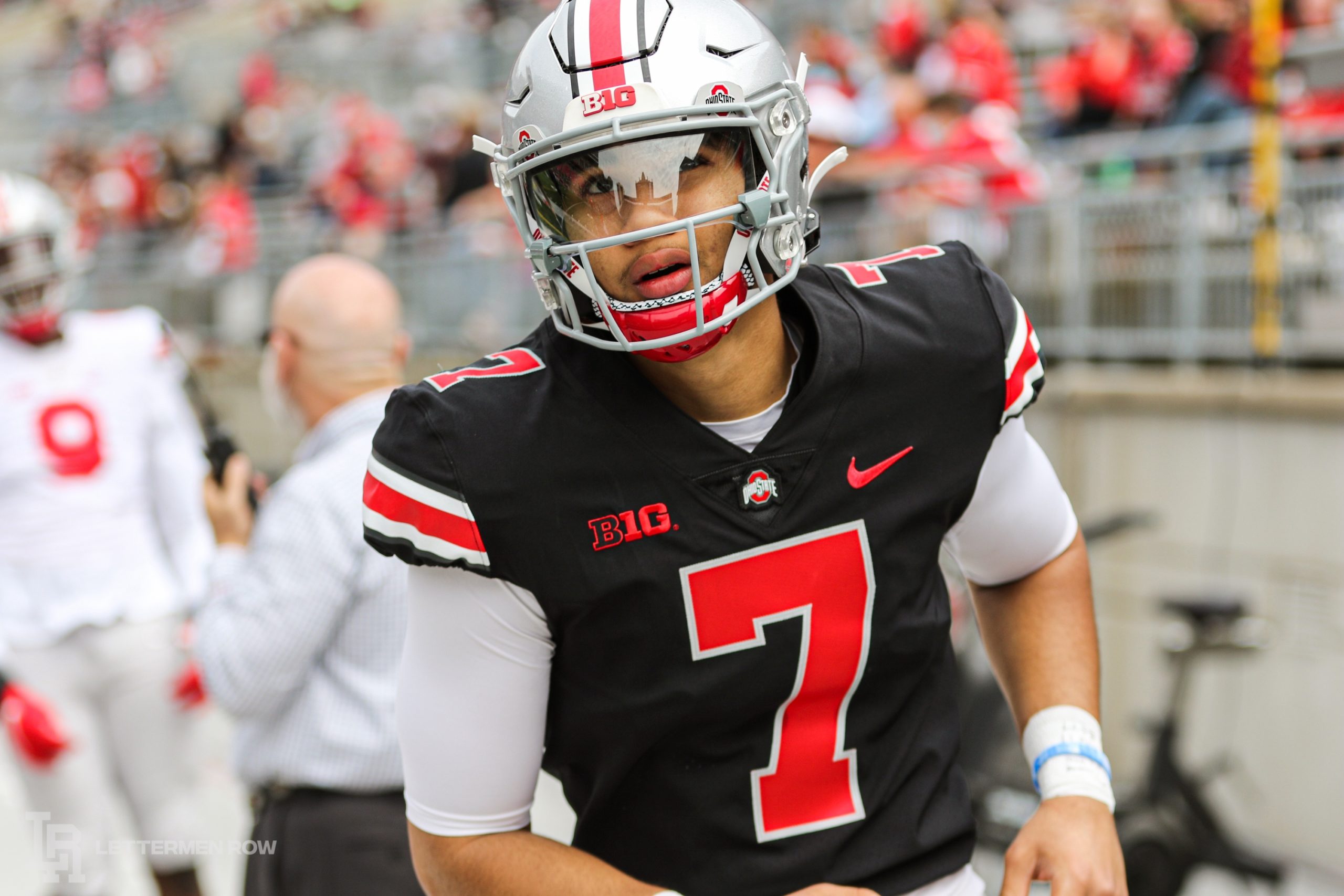 Ohio State quarterback C.J. Stroud appears to be the leader for the Buckeyes. (Birm/Lettermen Row)

As Ohio State made its way through spring practice, C.J. Stroud continuously was at the front of the quarterback line, taking the first reps in nearly every drill. He started on one side of the spring game and looking impressive in that limited viewing window. All indications point to Ohio State handing Stroud the keys to the football program.

Stroud is big and athletic. He can make throws Ohio State needs him to make. He has gained confidence during his time with the Buckeyes, and that will only grow. Can he play at the level Justin Fields did for the last two seasons? Does he have the potential to be a first-round pick like the last two starters at Ohio State were? Those questions are still to be answered, likely this September when the Buckeyes open on the road at Minnesota.

But he’s the leading candidate to replace Fields now, and it’s hard to see him giving that job away any time soon.