COLUMBUS â€” The recruiting trail is more quiet than it usually is this time of year, but thereâ€™s still plenty to break down for Ohio State.

That’s especially true this weekend following the Underclassmen Report combine in Obetz, Ohio on Saturday afternoon. Nearly 400 of the region’s premiere prep football players gathered in the small, southeast Columbus town and worked for a chance to play in the Under Armor All-American game and the brand’s Future 50 showcase.

A handful of big-time Ohio State prospects and commitments were on hand and worked out under a blazing central Ohio sun.

Lettermen Row was on hand to take in the action and we’re breaking down some of the day’s biggest storylines.

The standout performer of the day was Buckeyes 2022 commitment C.J. Hicks.

The 6-foot-4, 220-pound linebacker from Kettering (Ohio) Archbishop Alter showed off his new, bigger physique and quickly put to rest any worries that his bulked up frame would affect his athleticism.

More than his on-field ability, where Hicks really impressed was in a different type of development. He’s quickly become a polished speaker in interview settings and he’s growing into his own as a class leader for Ohio State, proving to be the 2022 group’s vocal leader and putting that on full display during Saturday’s event. Hicks shadowed the country’s top-ranked inside linebacker, Virginia standout Shawn Murphy, and it was obvious that the two have a real, solid relationship. The same can be said for Hicks and Kansas standout Dasan McCullough, Wisconsin star Braelon Allen and many others. In a short period of time, Hicks has become very comfortable in his own skin and it’s easy to see.

If his on-field growth continues, there’s no reason that C.J. Hicks shouldn’t end up being a 5-star prospect in the Class of 2022. He has it all and was honored with an invitation the the Under Armor All-American Game, which he promptly accepted. 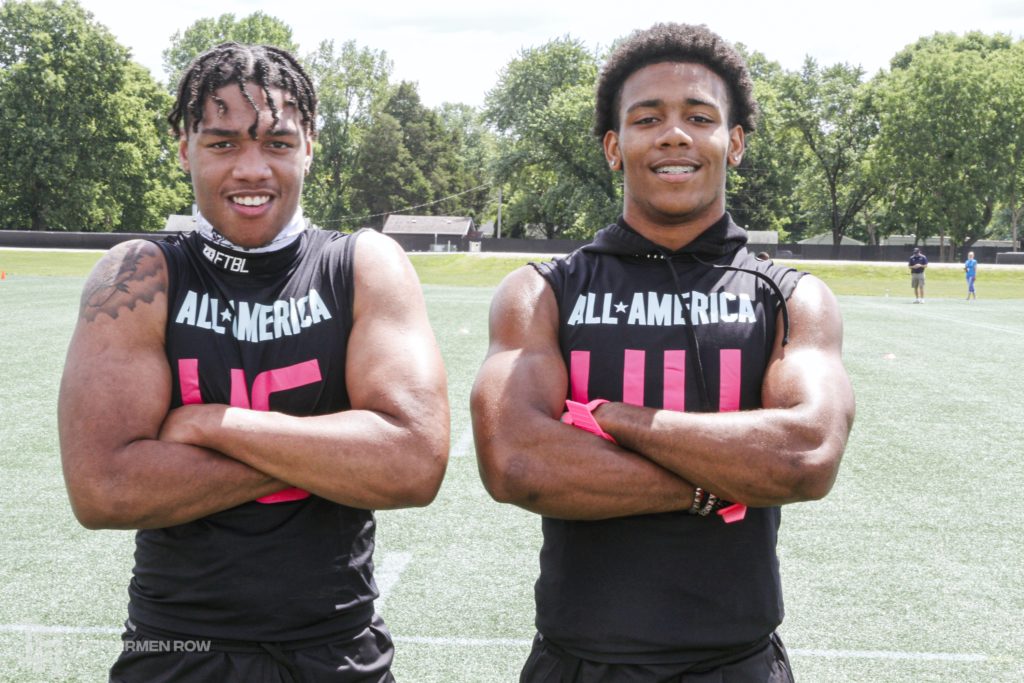 Murphy wasn’t as polished as Hicks was on Saturday but his highlight reel leaves no doubt as to why he’s ranked where he is. Ohio State has been all over him and Murphy told Lettermen Row that he talks with Buckeyes linebackers coach Al Washington more than he talks to any other college coach. Murphy has family in Ohio — he was in Youngstown visiting them this weekend which prompted the camp appearance — and was comfortable with the Ohio State commits on hand.

Lettermen Row will have more on Murphy this coming week, but it’s safe to keep him on the short list of real linebacker targets in 2022. 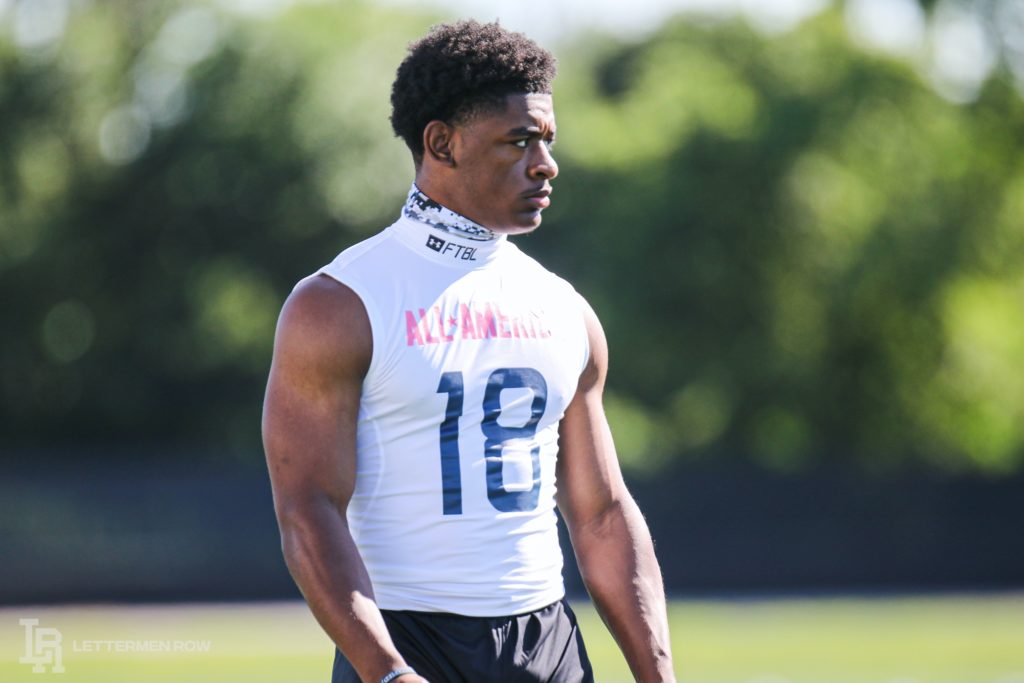 Ohio’s best 2022 running back looked the part on Saturday.

Cincinnati LaSalle’s Gi’Bran Payne didn’t include Ohio State in his recent top ten list — which makes sense because the Buckeyes haven’t offered yet — but he’s definitely still on the radar for Tony Alford. Payne was arguably the best running back in attendance on Saturday, showing next-level quickness and he’s put on close to ten pounds of muscle as he prepares for his first season as the featured back for the Lancers.

Payne told Lettermen Row that he’s being patient when it comes to the Ohio State recruiting interest but seems content to move on to other programs if it never comes. Alabama and former Buckeyes defensive back commit Devonta Smith are in his ear heavily at this point. 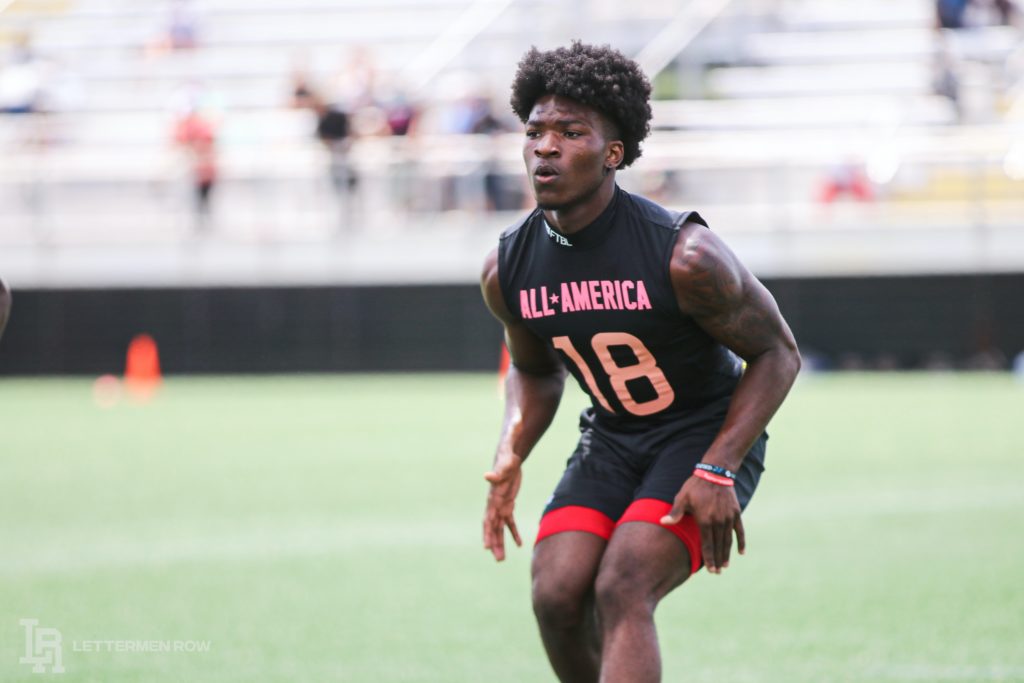 Jyaire Brown fitting in after move to Ohio

If there’s any early favorite for Mr. Congeniality in the Buckeyes class of 2022, it’s Lakota West (West Chester, Ohio) cornerback Jyaire Brown. The recent transfer from Louisiana was all smiles with each person he met on Saturday and eager to chat about his game, his recruitment and more.

On the field, Brown was one of the two best defensive backs in attendance — at least in Lettermen Row’s opinion — and really excelled in change-of-direction-type drills. He has incredible quick feet and moves very naturally. He got some attention from the staff of the event for his performance, both good and bad. He was praised for his drive and explosion but chided for not finishing drills a couple of times, but that’s something he’ll have plenty of time to fix before his time at Ohio State begins.

Buckeyes fans are going to love getting to know Jyaire Brown over the next few years.

We’ll have more thoughts, interviews and notes from this event over the next few days. In the meantime, hear from Hicks and Murphy on Lettermen Row’s most recent episode of Talking Stuff: The Ohio State Recruiting Podcast.

As part of Linebackers Week at Lettermen Row, the guys break down whatâ€™s next at that position, too.

Donâ€™t miss the latest show presented by Byers Auto as Jeremy Birmingham and staff writer Spencer Holbrook are back with the latest details, news,Â notes and rumors surrounding the world of Ohio State football recruiting.