It’s a hot-button issue among high school coaches and players in the state. In Texas, Florida, Georgia, California and a host of the country’s top talent-producing states, football has a place in the spring. In Ohio, it’s verboten. As the focus on college football recruiting has grown in the past two decades, college coaches lean toward states that have allowed it. Every year those kids are getting more practices, more live reps and more opportunities for in-person football evaluation from college coaches who have time to be on the road during the spring — time that’s much harder to find in the fall.

There are plenty of reasons that Ryan Day — and every other college coach in America — wants more high school football.Â  The Ohio State coach is optimistic that the opportunity is coming to the Buckeye State.

“I think it’s close to happening,” Day said Friday. “It’s something I’ve been a big part of. It’s being pushed for very, very strongly to have some spring football. We were about to get it done and — I don’t want to speak for the people there — but I think COVID put it on the back burner. Now it’s kind of back up on the front burner.

“There’s also been a lot of conversation about 7-on-7. That’s something we need to get going in the state of Ohio, like, yesterday.”

Day, of course, is a college coach, and a coach obsessed with quarterbacks. That position is undoubtedly the one that benefits the most from 7-on-7 play. That’s why college coaches want it, and that’s fair.

For prep players with college football dreams, the benefits seem obvious. Cameron Swiger, a top 2023 quarterback in Ohio, thinks it’d be valuable for his personal development. He says that he’s already seen progress because of the new summer rule and believes that spring ball would further grow his understanding of the position and his team’s offense.

“It’s helped us build chemistry, it’s helped up install plays much earlier,” Swiger said. “Especially as a quarterback, it’s super important, I think it would help with recruiting a ton to get to show yourself for a whole another season, and also develop as a quarterback with reads and getting to compete all year round.” 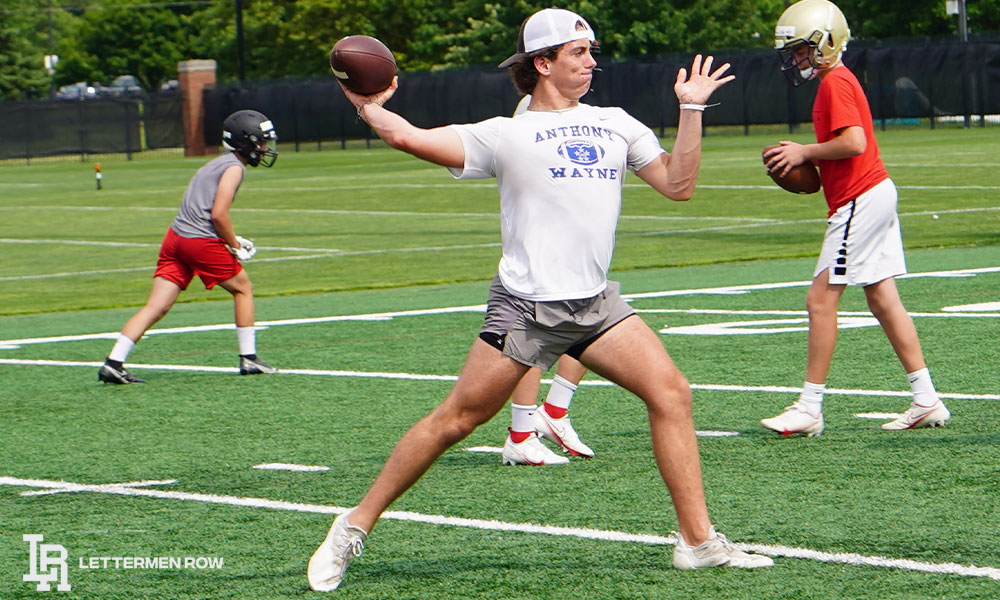 The Ohio High School Athletics Association — OHSAA — has already made some concessions to that end. Last summer schools were given unlimited coaching and instruction time in June and July for their entire team, a significant change from year’s past when only ten days were allowed in the summer.

Greg Dempsey, a multiple-time state champion at Toledo Central Catholic High School, knows people want more football. He wants more football, too. Like a number of his peers, Dempsey has questions about what it could mean for other sports, smaller schools and the players themselves. Prudence is being preached and he believes the state could be well-served to see how last year’s change works for schools and players before adding more time in the spring.

“Who doesâ€™t want to do football all the time? But, I don’t think they should do anything with spring ball until we see what the unlimited coaching in the summer does,” Dempsey told Lettermen Row. “We can do as much or as little we want in the summer. Weâ€™ve been doing skill work all summer and we’ve never done that before. They let us do it last year because of the chaos, but weâ€™ve been able to keep it.

“Thereâ€™s some years ago there was talk about it, Coach Meyer was there and it was being heavily pushed. We went through some leadership change at the OHSAA that may have slowed that down but there are a lot of concerns, and it canâ€™t be a decision made at the snap of a finger. What happens to the smaller schools with spring sports? I donâ€™t want to increase specialization at the high school level because I think it could hurt other sports which would end up hurting schools, especially the smaller schools.”

The unlimited coaching time in the summer is a good step in the right direction, if a middle ground is being sought. Mandated team activities throughout June have the potential to force kids fortunate enough to be recruited into potentially unfair decisions, though. June is camp season for college programs like Ohio State. In last month’s insanity, a number of players had to skip team activities for recruiting opportunities. Those decisions wouldn’t need to be made in the spring.

High school coaches have concerns about spring football, and they’re fair too. It’s not a black and white issue. However, states all around the country have found a way to implement more football without sacrificing other sports or limiting development of other athletic endeavors.

Ohio can do the same. Hopefully, in whatever way is best for coaches and players, the state is close to it.