COLUMBUS â€” Master Teague can see the competition heating up to be the starting Ohio State running back.

The veteran back, who has more experience and carries than any of the other five scholarship running backs on the roster, has a first-hand view of the brewing battle for touches in the Buckeyes backfield.

And while the pair of talented freshmen and other younger backs are receiving all the headlines and attention, Teague continues to put his head down and just work. The incumbent for the starting job, Teague starts in a position to keep his job. While all the attention is elsewhere, Teague remains focused and team-centered.

â€œOf course I want to be that guy,â€ Teague said. â€œBut weâ€™ll continue to make each other better and compete. Whatever my role is going to be thatâ€™s best for the team, thatâ€™s going to be my role. Weâ€™ve got a lot of depth, a lot of guys. That helps us stay fresh in practice and helps us for the overall health of the unit — and the team, too.â€

Teague isn’t bothered by the shiny new freshmen tailbacks in the room. He understands the talent TreVeyon Henderson and Evan Pryor bring this spring as early-enrollees. He’s also not bothered by Marcus Crowley, Steele Chambers or Miyan Williams, the other three younger backs competing for Teague’s job.

Last season, Teague entered the year as the starter ahead of transfer back Trey Sermon. But as the year progressed, Sermon became the bell-cow rusher, helping lead Ohio State to a national title game appearance. Entering the spring, Teague seems to be the starter in the Buckeyes backfield. But he’s not guaranteed to stay in that lead role. 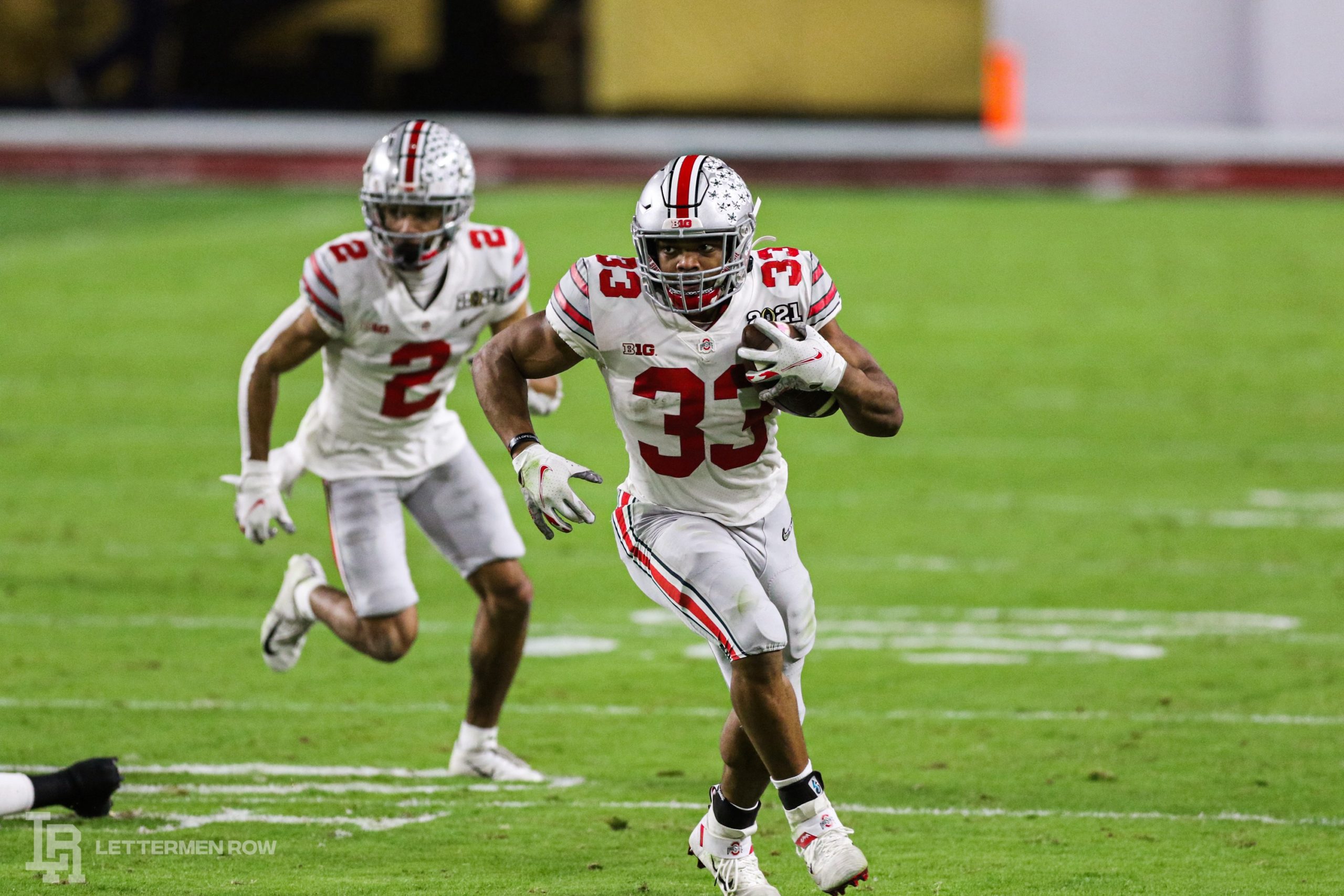 Master Teague has a chance to take over the running back job. (Birm/Lettermen Row)

“Right now if we played a game tomorrow, he would be,” Ohio State running backs coach Tony Alford said. “He’s the incumbent starter. He’s played the most and had the most reps of anybody in the room. But there’s other really good players here, too. I’m really anxious to watch Miyan Williams. Here’s a guy that had a smattering of carries, a very small sample size, but what he did have, he was very successful in those opportunities. He’s continuing to grow into the program and this offense. Marcus Crowley’s coming back. Steele’s had his moments, and now you have two young guys.

Experience matters at Ohio State. Teague was a top-10 rusher in the Big Ten in 2019 as a backup for J.K. Dobbins. Before the pandemic shut down spring practice last year, Teague injured his Achilles and would have missed those vital spring practice sessions had they happened. But by the beginning of the year, he was ready to play — and he did. He has 1,409 yards and 13 touchdowns in his career. He’s more than capable of being the lead back to help Ohio State’s new quarterback this year.

“It’s a little weird being the old guy now, being the veteran,” Teague said. “It went fast, but it was long at the same time. It’s rewarding, too, to pour into the guys what I know and share with them. We really want to be the best unit in the building.”

If he’s not the starter, he’ll still come in with the same attitude, regardless of where he lands on the Buckeyes depth chart. He did it as a backup the last two seasons. He wants the running-back room to be great.

If he gives the Buckeyes the best chance to win games, he’ll certainly see a bulk of the carries.

Master Teague has a perfect view of the ongoing competition to be the lead running back at Ohio State. Just don’t count him out of it just yet.