What We Learned as Ryan Day, Buckeyes begin offseason program
Article written by:

After a fall that featured daily COVID testing, a fight to play the season, an undefeated regular-season campaign, a semifinal win and a national championship game loss, the Buckeyes coach — and everyone in the program — needed some time to decompress and recharge.

“Stayed a few days in Florida with the family, then we headed to New Hampshire,” Day said Friday morning with a smile as he talked to reporters. “Tried to go to the two extremes and locked ourselves in the house, got around family a little bit and then headed back to Ohio. … It was good.

Surely the greyhounds and screwdrivers on the beach in Florida helped him unwind after a stressful season. And the IPAs in the Northeast were also well-deserved. Now, though, the time off is over. Day and his coaching staff are back in Columbus preparing for another run to a national championship.

Day met with media Friday for the first time since the crushing national-title loss to Alabama to preview spring practice and a busy offseason for the four-time defending Big Ten champs. Lettermen Row is breaking down What We Learned from a loaded press conference with Day.

The season that was haunted by COVID might be over, but the pandemic is not. So the Buckeyes will still have hurdles to clear in order to have a full slate of spring practices.

With a lack of a true spring period last year and the stop-and-go nature of in-season practices, the spring session will be huge for the development of young players and the program as a whole.Â Ohio State is planning to find a new way to run spring practice to make up for a lack of practice time — and games — from last season.

“We’re definitely going to look at a different spring model on how we go about it,” Day said. “I’m going to try to do as many game-like situations as possible, for sure. Also the way that the season ended a little later here, we have no spring break, so it’s going to be a little bit different. We’re still working through that and how we’re going to organize it. I think we have the weeks that we’re going to be working pretty much nailed down, but we’ll finalize that over the next week or so.”

This spring won’t look normal, but those 15 vital practices will benefit the program now and in the future. 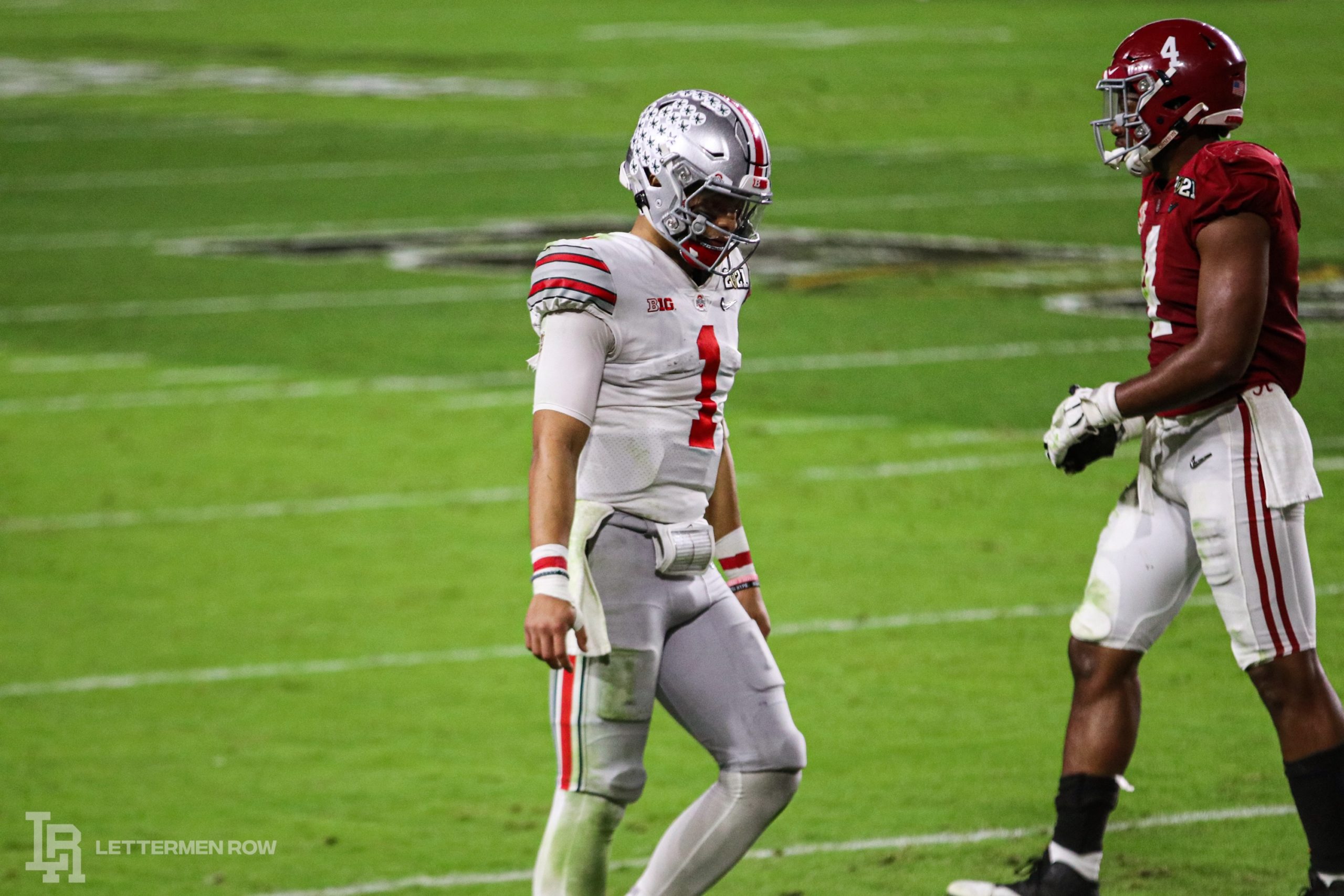 Transfer portal is option for Buckeyes

Ohio State has used the transfer portal as effectively as any program in the country, mainly because it uses it sparingly. The Buckeyes have brought in Jonah Jackson, Justin Fields and Trey Sermon to help them compete for national titles in the last two seasons.

The Buckeyes only go searching in the transfer portal when a glaring hole presents itself on the roster. Although there aren’t any current obvious needs, the Buckeyes personnel staff is monitoring the portal for any additions that would serve a benefit. But it has to be the right fit.

“When you look at our team right now, we have a great culture,” Day said. “And the first thing is, any time you bring anybody in, whether it’s a coach or a player, they have to fit our culture. And when you go through and you look at where we’ve recruited in the position groups, we’re pretty healthy in most positions. So we’re always looking at that, and now more than ever, Mark Pantoni and his staff are always looking to see who’s out there. But it has to be the right fit. We feel like there are a lot of guys in our program right now that can play for us.”

As the new semester starts at Ohio State, 14 of the freshmen from the class of 2021 are already enrolled in classes. Some of them are beginning to arrive on campus as their Ohio State careers get kicked off.

Before any of the early-enrollees can begin workouts and practice with the team, they must quarantine for a week. And then they can get to work.

“The great thing is we’re going to have a good portion of our team here now from Feb. 1 all the way until the first game of the season, which is great because usually when you don’t have a chunk of your guys in at mid-year, it’s close to a quarter of your team or 20 percent of your team isn’t there until the summer,” Day said. “Now, we have the majority of these guys already here. So we can already start on all that stuff and they can get ahead of the game. We have to do a great job of getting them in here with Mick and figuring out where they are and what’s their baseline. … So we’ll get a feel for it.”

All 14 early-enrollees will have a chance to prove themselves worthy of playing time early in their careers. 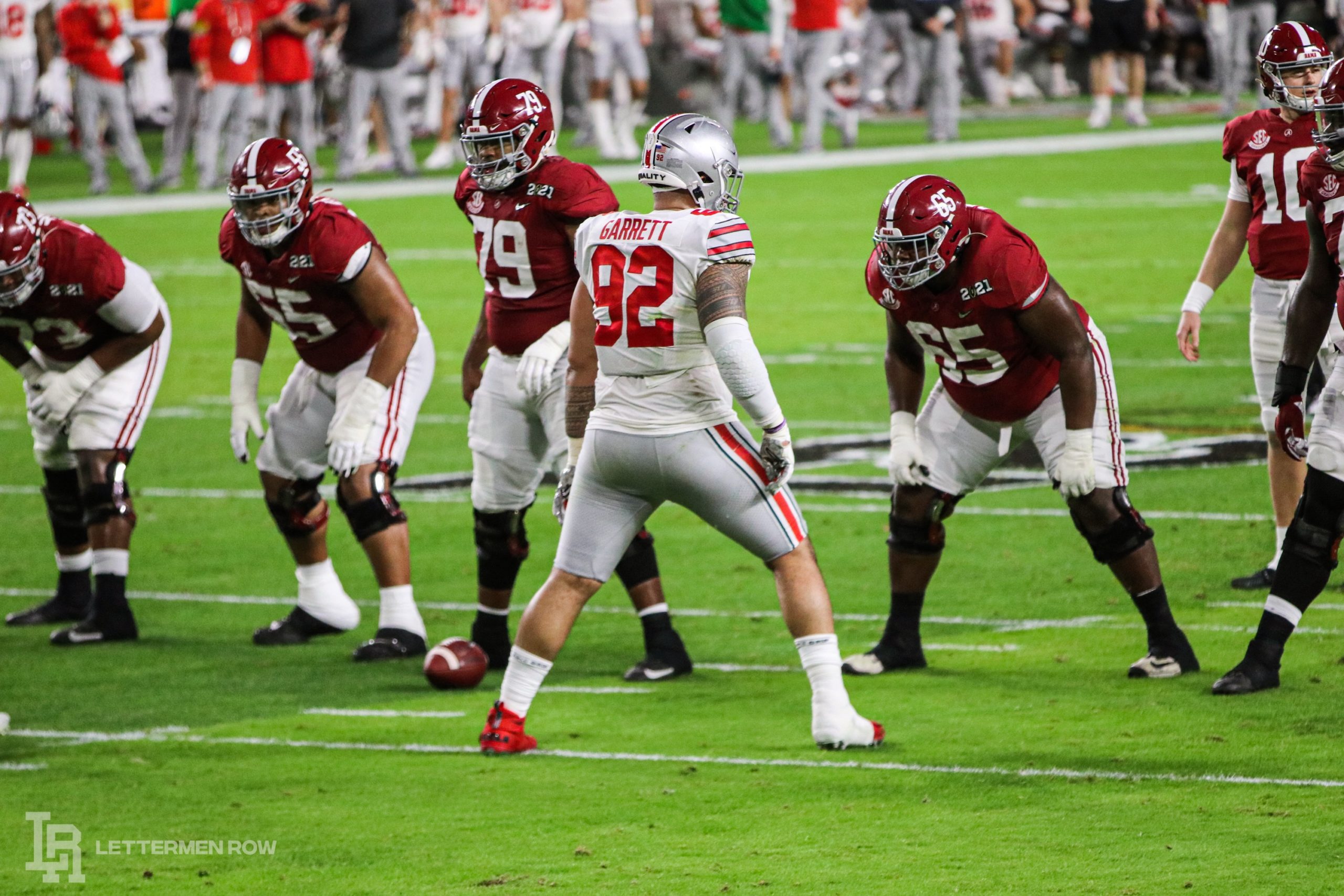 Ohio State will have Haskell Garrett back next season. (Birm/Lettermen Row)

Ohio State received a major boost on both sides of the ball because of a new one-time NCAA rule. The Buckeyes will have starting tackle Thayer Munford back on the offensive side of the ball, both Haskell Garrett and Antwuan Jackson on the defensive line and defensive back Marcus Williamson returning in the secondary.

Under normal circumstances, all four of those players would be out of eligibility. But since last season didn’t count against eligibility, all four are able to return to the program without counting against the 85-scholarship limit. And all four will give the Buckeyes a big boost as they push for another College Football Playoff berth.

“I think it’s unbelievable, and I think it speaks not only to our leadership … [but also] our culture and the environment here,” Day said. “For those guys who decided to come back, what a great opportunity for them. It just goes to show you their maturity. Not only do they love their teammates, they love Ohio State.

“They still have unfinished business here at Ohio State and they want to maximize themselves as players here in college, but also in the NFL. That’s what a lot of them understood. It’s one thing to be able to go play in the NFL. It’s another thing to be ready when you get there. These guys understand that.”