INDIANAPOLIS â€” Last spring as Ohio State was preparing for what it thought would be a regular football season, Justin Hilliard had a decision to make.

A former 5-star prospect, Hilliard’s time with the Buckeyes had been marked by a remarkable run of bad luck. The linebacker had dealt with three season-ending injuries over the previous four years, but didn’t want to hang up his cleats. He wanted to play football, like he’s always done.

But the Buckeyes had Pete Werner, Tuf Borland, Baron Browning, Dallas Gant, Teradja Mitchell and K’Vaughan Pope all returning to Ohio State. Because of that, there was a moment or two when the Cincinnati St. Xavier product wondered if his best chance to play meaningful minutes this year could’ve been somewhere else.

Hilliard trusted his gut, though, and with spring camp lost because of the Covid-19 pandemic, he decided he’d complete his college career with the Buckeyes. Somewhere between those spring-time conversations and Saturday against Northwestern, the definition of meaningful minutes probably changed.

It’s hard to argue that Hilliard has ever played minutes more significant than he did this weekend. In his sixth year at Ohio State, “Hilly” rose to the occasion when his teammates and his position coach needed it the most.

With the Buckeyes already trailing in the second half and the Wildcats deep in the red-zone, the 6-foot-1, 231-pound linebacker was split out wide, isolated in man coverage across from tight end John Raine. Northwestern looked Raine’s direction believing it had a matchup advantage against Hilliard, and fellow Cincinnati native Peyton Ramsey — who’d played a flawless game to that point — didn’t hesitate. Hilliard didn’t flinch. He played the pass perfectly, turned, leapt and picked off the Wildcats in the end zone, ending the only touchdown threat Northwestern would muster in the second half.

“How about the interception he had in the one-on-one?” Ohio State coach Ryan Day said after the game. “I mean, he played his tail off.â€ 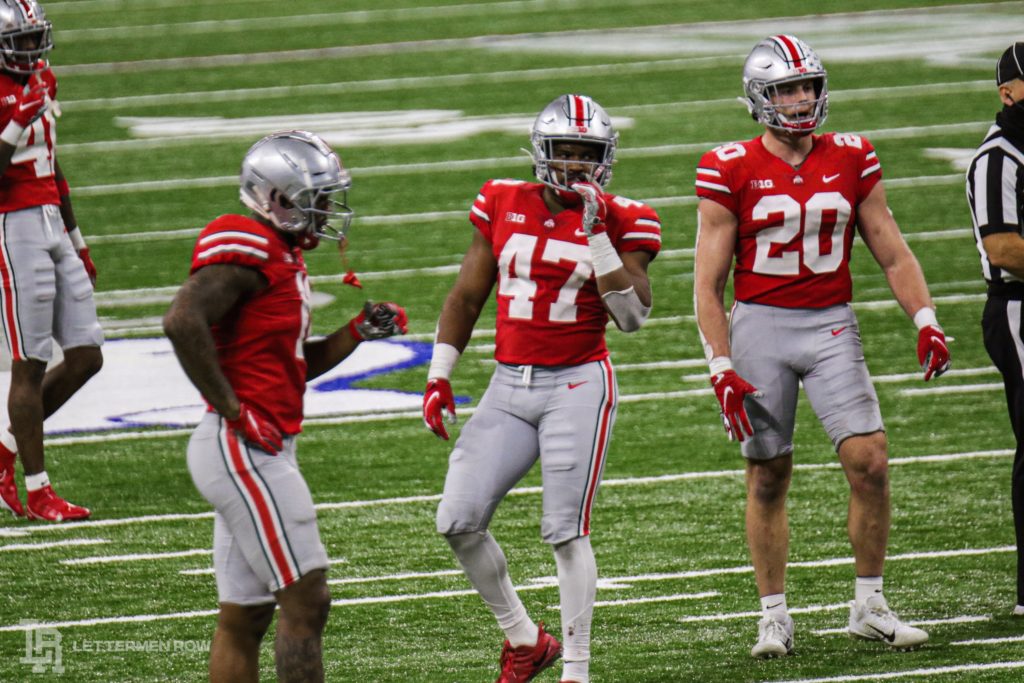 Hilliard played the best game of his Ohio State career on Saturday even without that momentum-changing interception. He recorded a team-high nine tackles, he recovered a fumble and had two tackles-for-loss. He was all over the field in place of the unavailable Baron Browning, and he didn’t know he’d even be called upon in that role until Thursday afternoon. As he has for his entire Buckeyes career, Hilliard did everything that was asked of him and gave the credit to everyone else.

â€œOur coaches put us in the best positions to make plays, man” Hilliard said. “I felt like I was extremely ready.”

Ohio State has had no shortage of key players returning to its roster in this bizarre season. Justin Fields could have stepped out and prepared for the NFL Draft. Wyatt Davis, Shaun Wade, Browning and a half-dozen other Buckeyes could have done the same. Those players usually get the headlines, and that’s understandable. But that doesn’t lessen the impact of the story of Justin Hilliard and veterans like him who haven’t always been in the spotlight and are tasked with a different type of leadership.

They’ve had the hard road, and at every turn they have made the choice to put the Buckeyes first.

â€œThis whole journey, man, it’s been tough — but it’s been such a blessing at the same time,” Hilliard said. “Earlier this week I was able to talk to the younger guys at Senior Tackle, and that was just so emotional for me. The journey I’ve been on and the guys that have been here with me, to stick with me, and push me through some of those tougher times … I knew I had to step up in a bigger role.”

Justin Hilliard has been a coach-like presence in the Ohio State linebackers room. (Birm/Lettermen Row)

Hilliard’s role on Saturday was obvious. He needed to make plays, and he did. But, the impact of players like Justin Hilliard is much bigger. As he walked off the field celebrating a fourth straight Big Ten title, he was greeted by young linebackers Craig Young, Mitchell Melton and Cody Simon, each of them embracing the veteran with the respect. The admiration they have for him easy to see. The happiness they felt for him even more visible.

The world of college football is changing. Expectations of early and regular playing time are being stacked up against the impending insanity of free-transfer years. The need to build a player’s on-the-field toolbox is going to run into the desire to build personal brands with the hope of maximizing name, image and likeness possibilities.

Last Friday, another Buckeyes linebacker took frustrations about his role to social media in a now deleted tweet. After the game, another veteran broke the code of the locker room by posting the raw, unfiltered comments from Ryan Day from a celebratory locker room, offering another reminder by comparison of just how important it is to continually act responsibly and with maturity. Competitors want to compete, and everyone that’s a part of the Ohio State program is a competitor. Sometimes though the chance to make plays takes longer than a player would like, and Hilliard has done nothing but represent Ohio State the right way for six long years.

No matter how the season ends, the sacrifice and commitment players like him gave just for a chance to play one last time in a Buckeyes uniform shouldn’t ever be overlooked.