CHICAGO — Keyshawn Woods tried to act like it was totally normal.

The Ohio State guard took his time, calmly stepped back into a jump shot with the first-half clock ticking down, drilled it — and then kept a straight face as he jogged to the locker room with his teammates swarming around him.

Deep down, Woods admitted that he wanted to celebrate right along with them instead of staring directly ahead, expression never changing. But the senior guard had more work to do with the Buckeyes down the stretch, and that serious mindset paid off with easily the most impressive performance of his one-year career with the program.

Without him or with the version of Woods that battled inconsistency throughout the season, Ohio State might have crashed out of the Big Ten tournament and been heading for the NIT. But the one the Buckeyes saw on Thursday against Indiana was the Woods who was aggressively pursued as a graduate transfer for a reason, and he was instrumental in a 79-75 win that will likely punch a ticket the NCAA Tournament.

“I wanted to — and I celebrated a little bit,” Woods said with a smile. “But I got calm real quick.

Whether it was just the way Woods attacked the matchup, the personal motivation to extend his well-traveled collegiate career or simply his turn to step up and fuel the offense in key moments, all that mattered to the Buckeyes was that the veteran guard delivered. 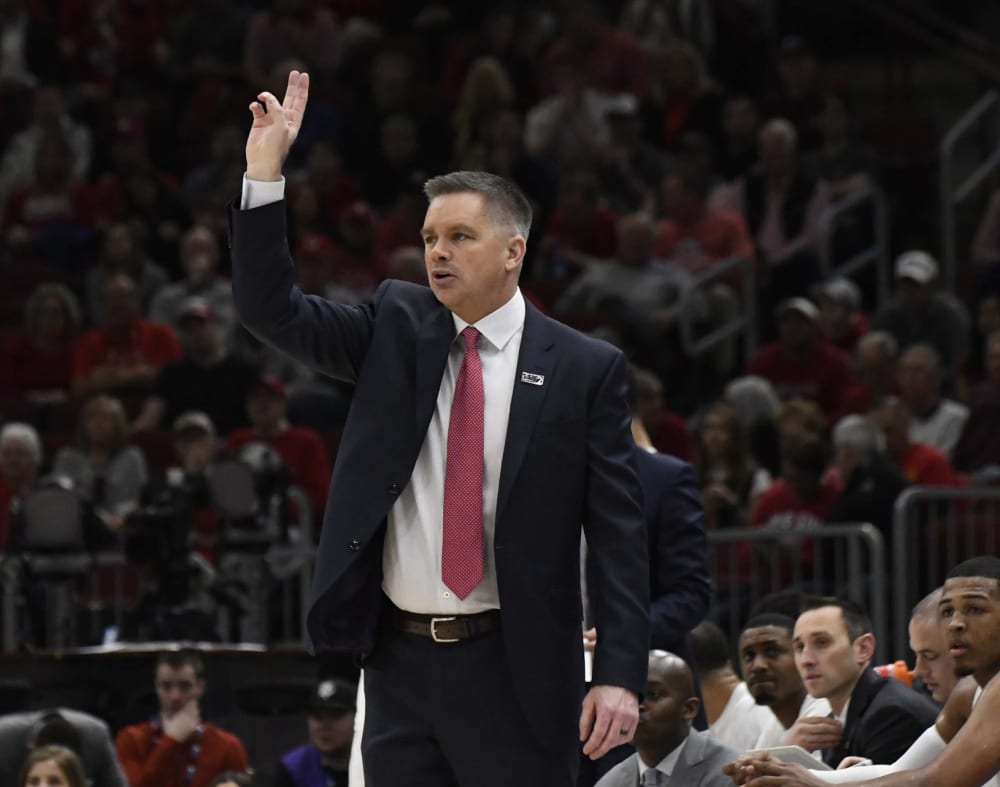 Ohio State coach Chris Holtmann got the best out of Keyshawn Woods and the Buckeyes. (David Banks/USA TODAY Sports)

There was plenty of other credit to go around in the critical win over the Hoosiers. Kaleb Wesson returned from suspension and was an obvious difference-maker on both ends of the floor. C.J. Jackson provided a handful of clutch buckets and offered a steady hand in the backcourt. And seemingly every other player in a supporting role found a way to contribute when the Buckeyes had to have it.

But it was Woods who stole the show, delivering the kind of performance that was expected much more often when he decided last summer to use his final season of eligibility with Ohio State. There were flashes, most notably in an early-season road win over Creighton that only fueled greater expectations for him. But he had only scored in double figures in five Big Ten games this season entering the conference tournament.

“I thought he’s looked, since the 10-minute markÂ of the Wisconsin game, like a guy that wasn’t ready to see his career over anytime soon. And that’s what you hope in seniors. Like, that is what we’ve been kind of hoping to see, honestly, in light of being down Kaleb, we’ve been hoping to see that.”

A late look is far better than never in this case, and if Woods can find a way to string together more outings like this, Ohio State will have a chance to win a couple more times in the postseason.

The Buckeyes are facing a stiff test against top-seeded Michigan State on Friday. There is no telling after that what the bracket will look like for Ohio State on Selection Sunday — aside from the fact that the program should be included. And, yes, Woods obviously hasn’t been the most reliable player on the roster from game to game.

But at his best, he offered a clear reminder that he’s capable of raising the bar for the Buckeyes.

“This was definitely one of my better games as a Buckeye, and I definitely wanted to play tomorrow. It was important to me, and it was important to us as a team.Â I hope we’re in [the NCAA Tournament now]. But if we win tomorrow, we’re definitely in. We just have to keep it going, keep bringing the same effort that we had tonight into tomorrow and we’ll be good.”

Woods took a page out of his own playbook in the locker room and wasn’t ready to celebrate a bid to the Big Dance quite yet.

But the Buckeyes should get it this weekend, and it was the Keyshawn Woods that Ohio State was expecting all along who earned it.