COLUMBUS — As the Ohio State football team awaits its assignment for the week, it behooves all to take another look back at the major milestone just passed in this remarkably crazy year.

In the victory at Michigan State on Saturday, Larry Johnson became the first Black head coach in program history to lead Buckeyes in a game. Had not the Covid-19 fates conspired the week before to force cancellation of the trip to Illinois, itâ€™s likely he would have handed the keys back to Ryan Day on Monday while on a two-game winning streak.

But that didnâ€™t lessen the accomplishment of guiding the coaching staff and the players while Day was quarantined at his home after testing positive for Covid on Thanksgiving week. And notching that win near the end of a year when racial injustice again was thrust to the forefront in this country — indeed, at the back base of quarterback Justin Fieldsâ€™s helmet this season is the simple word “Equality” — spoke volumes.

So the sight of Larry Johnson — believed to be 68 and otherwise known as the elite defensive line coach in the country — enduring a celebratory Gatorade shower courtesy of the players on Saturday at East Lansing had all kinds of meaning. 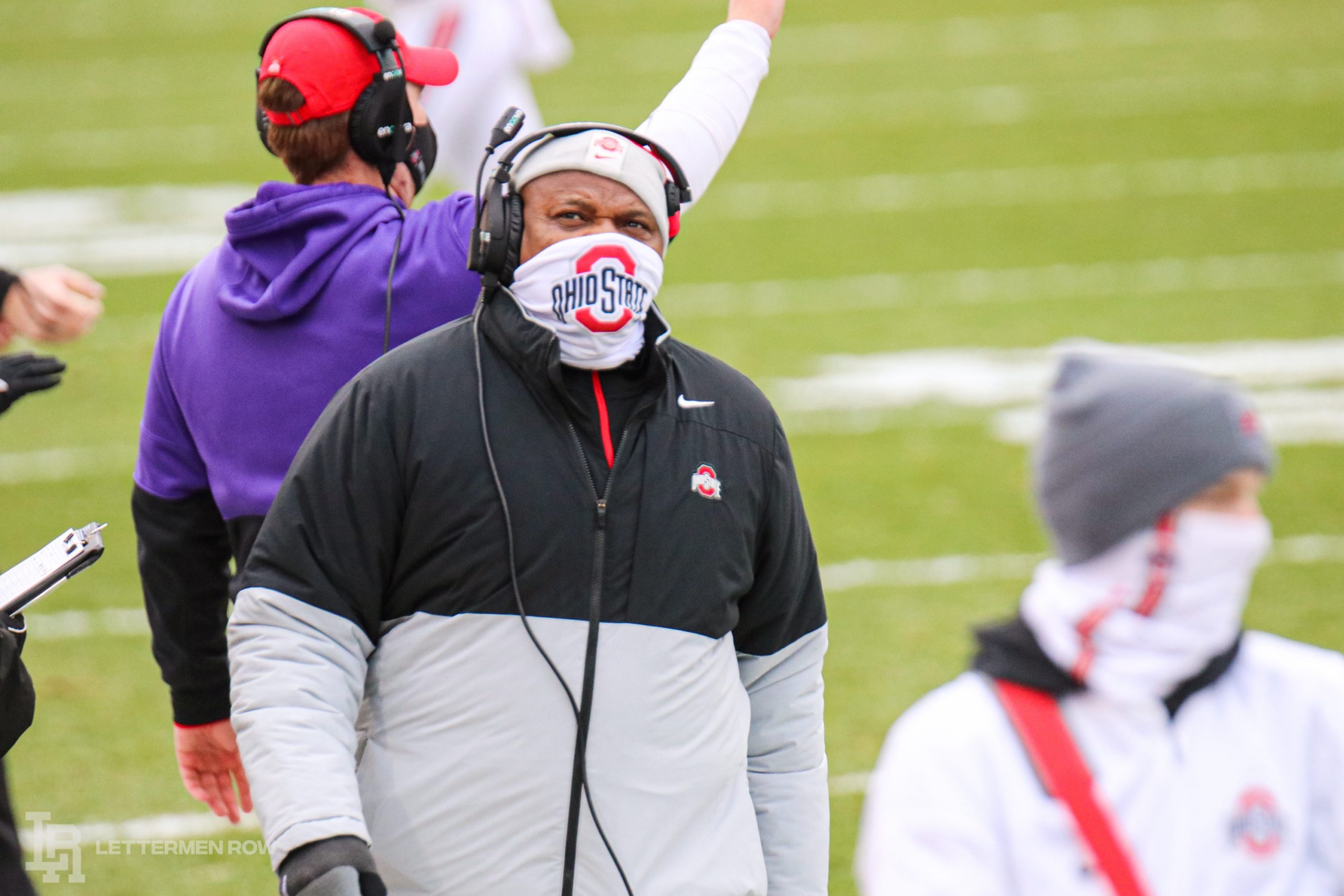 It was not lost on Smith that the game featured two African-American head coaches, including Michigan Stateâ€™s Mel Tucker, and an African-American head referee in Larry Smith. Gene Smith believed that to be a first for the Big Ten, and even it though that possible milestone was not verified, it was still another remarkable occurrence in this strange year.

â€œHe did a masterful job leading this team during a critical time when these young men had to overcome tremendous adversity,â€ Smith said. â€œIâ€™m proud of him and happy for him.â€

Not that Johnson spent much time taking a bow. He saw it as more a moment when he lived up to a team credo, much as the three new starters on the offensive line did for their teammates who had to miss the game because of Covid concerns, and the way the coaching staff made up for the absence of Day plus defensive co-coordinator Greg Mattison, special teams coordinator Matt Barnes and quarterbacks coach Corey Dennis.

â€œWe call it standing the gap,â€ Johnson said. â€œI thought the staff did a great job standing the gap, moving us forward, giving the kids the chance to play. I think thatâ€™s most important thing.â€

He didnâ€™t want to blow the chance at his first win, but not necessarily because of the historical footnote.

â€œI didnâ€™t think about any of that,â€ Johnson said. â€œI was thinking about coming to East Lansing and getting the win. I wanted to make sure when I turned it back over to coach Day we were 5-0. That was the biggest thought in my mind.

â€œI did not want to go back Sunday, stand in front of that team after losing a game.â€

It was mission accomplished, and milestone passed. The Gatorade shower was the exclamation point to both statements.

Day said to elevate Johnson to acting head coach was a â€œno brainer,â€ since he already had the title of associate head coach. Such a move had been in the contingency plans since preseason when provisions had to be made should Covid make its way into the Ohio State coaching ranks.

â€œLarry has great leadership; Larry understands how to motivate a team â€“ when he stands in front of the team, guys listen,â€ Day said. â€œI think his leadership had a big part in how well our team played (in the 52-12 win at Michigan State), and the energy they played with.

â€œCouldnâ€™t be happier for him. To see him get the Gatorade bath at the end, I had a tear in my eye. Heâ€™s been through a lot this year; weâ€™ve all been through a lot. But to see that moment for him and this team was special.â€

Still, it was an icy shower on a 36-degree day.

â€œBut what a great moment. â€¦ Iâ€™m really happy for all the guys, and the way they responded throughout the adversity.â€