The speculation, debate and conversations about Ohio State never end, and Lettermen Row is always ready to dive into the discussions. All week long, senior writer Austin Ward will field topics on the Buckeyes submitted by readers and break down anything that’s on the minds of the Best Damn Fans in the Land. Have a question that needs to be tackled, like the one today on Malik Harrison? Send it in right here — and check back daily for the answers.

There may have been some ups and downs for the linebackers at Ohio State last season, and there was certainly inexperience for that position when the program reported for the first day of training camp on Friday morning. But that unit is bursting with potential, and Malik Harrison in particular looks like he’s poised for the kind of All-Big Ten breakout the Buckeyes need.

Harrison was already an imposing physical specimen, but this offseason has clearly transformed his body into something potentially even scarier for opponents. Ohio State lists him now at 6-foot-3, 245 pounds, but he looks strong enough to play on the defensive line while still retaining the speed to play outside linebacker or throw down ridiculous dunks in his spare time. With the Buckeyes looking to become more aggressive defensively, Harrison’s skills and mindset should make him the perfect candidate to emerge as a first-time starter into one of the most important contributors on the team. 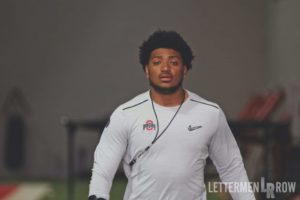 Malik Harrison has bulked up to 245 pounds for Ohio State. (Birm/Lettermen Row)

“Malik is a playmaker,” linebackers coach Billy Davis said after spring camp. “Thatâ€™s got a lot of people looking at him.”

That attention should only grow from here, although there is still almost a full month of practices ahead for Ohio State before Harrison can be turned loose. It’s not unreasonable to expect the same kind of leap Darron Lee made at outside linebacker for the Buckeyes once upon a time, and it obviously helps that Harrison got enough of a taste of experience last year to jump start the process. He made the most of his somewhat limited opportunities, finishing with 36 tackles, 3 tackles for loss and 2 sacks a year ago that hinted at how he might be able to stuff the box score as a full-time performer.

For a rebuilt unit, Harrison has the ability to be a foundational player for the Buckeyes. And by the end of the season, some awards should follow.