COLUMBUS — There can be a healthy debate about the top tailback for the Ohio State offense. But it comes to a screeching halt if Mike Weber is putting the football on the ground.

When he’s healthy, aggressive and physical, the redshirt junior makes a compelling case that he could be the primary rusher and potentially deserves more carries. Without his pair of dynamic runs in the third quarter last weekend, the Buckeyes could have potentially seen a much different outcome in a tight battle against Nebraska.

But Weber also fumbled twice. And even though Ohio State didn’t lose either of them, the fresh memories of suspect ball security appeared to be on the minds of Ohio State as it kept feeding attempts to J.K. Dobbins instead — letting him finish with 14 more touches than his partner in a loaded backfield.

Maybe that doesn’t seem like much of a dilemma right now for the Buckeyes since Dobbins is more than capable of powering the rushing attack. But Weber clearly has an impressive upside, and if that loose grip on Saturday was an aberration, the conversation about using both tailbacks surely isn’t over yet. 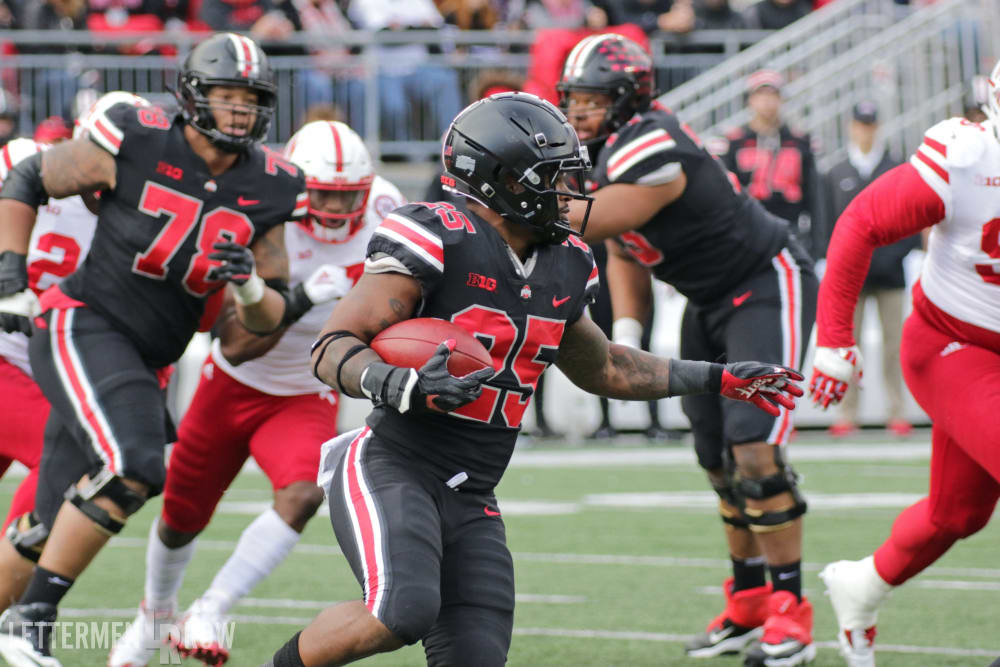 Ohio State running back Mike Weber could be a player who needs more work for the Buckeyes. (Birm/Lettermen Row)

“I’ve been okay with [the rotation],” Ohio State coach Urban Meyer said. “I don’t micromanage that too much, but if I have to I’ll get involved in that. But I think a fresh back that goes a good series and then the next guy gets the next series [works].

“And obviously near the end J.K. got a couple of extra series just because he was so tight with the football. We have to make sure Mike takes care of the ball.”

When Weber does that part of the job, he’s been handling the rest of it well enough to be considered the top option for the Buckeyes.

Heading into the final three weeks of the regular season, for example, Weber has averaged a full yard more per carry than Dobbins. And when it comes to explosive carries that cover at least 20 yards, Weber has accounted for six of them for Ohio State this season — four more than Dobbins.

Those aren’t the only ways to evaluate running backs, of course. And no amount of yardage would make up for a play that ends in a lost fumble. But Weber has made an interesting, and maybe complicated, case that he deserves more action.

In his latest visit to the Lettermen Row film lab, former Ohio State tailback Antonio Pittman puts Weber’s latest performance under the microscope for another BuckIQ episode on the rushing attack. The breakdown looks at the balance between big plays and potentially costly ones as the Buckeyes get ready for a huge Big Ten battle at Michigan State.