The speculation, debate and conversations about Ohio State never end, and Lettermen Row is always ready to dive into the discussions. All week long, senior writer Austin Ward will field topics about the Buckeyes submitted by readers and break down anything that’s on the minds of the Best Damn Fans in the Land. Have a question that needs to be tackled, like the one today about the Ohio State offensive line? Send it in right here — and check back daily for the answers.

OLine was supposedly the thinnest position for this game; how is the outlook after their performance on Saturday?

The hard part is over for the Ohio State offensive line.

The Buckeyes spent the spring getting humbled at times up front, shuffling around personnel due to injuries and illness and generally just trying to survive until a full-strength lineup is back on hand. There were clear signs of progress for some individuals, to be fair. But for the overall unit, that wasn’t exactly a fun-filled camp leading up to the exhibition on Saturday in the Horseshoe.

So, should Ryan Day really be worried when he puts the offensive line at the top of his list of concerns heading into the summer? Probably not, particularly based on the help that the first-year coach has on the way — which could wind up giving him a deeper, more versatile unit than Urban Meyer ever had with the program.

â€œOn the offensive line, we have four guys to replace there,â€ Ohio State coach Ryan Day said after the exhibition game on Saturday. â€œAnd so, thatâ€™s something where weâ€™re probably the least experienced â€” that and quarterback are the two for me.

â€œConcern wise, itâ€™s the offensive line because we lost four real guys there and Thayer [Munford] didnâ€™t play in the spring. How is that all going to look when we get into the preseason? We do have some guys coming in, which is good. Weâ€™ve got the cavalry coming, which is important.â€ 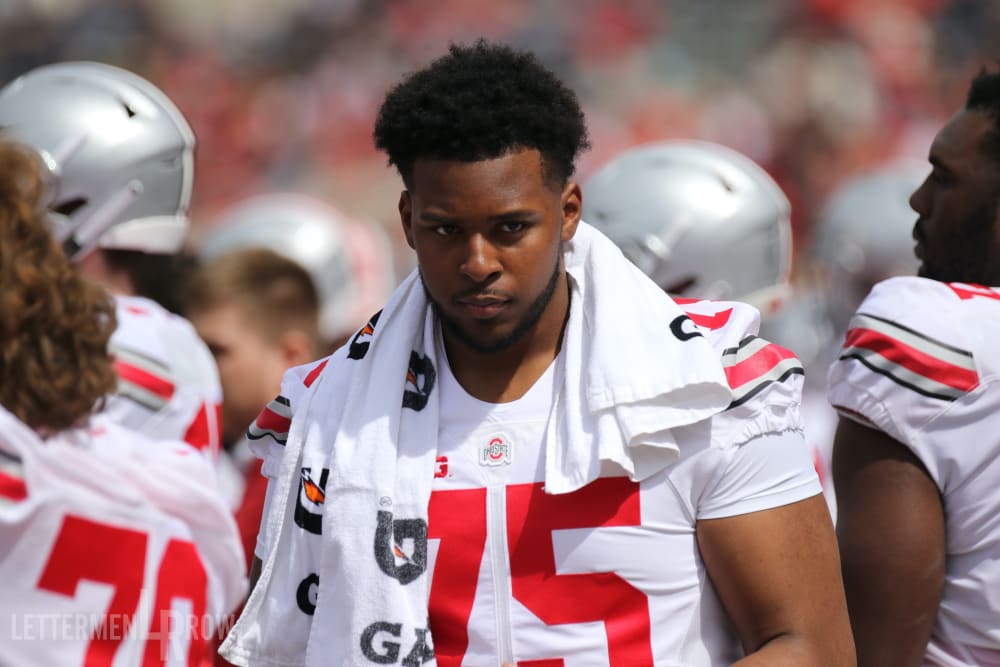 First and foremost, Thayer Munford will be leading that charge — healthy and free from the pain in his hip that slowed him down at the end of last season. After missing all of spring, the return of the starting left tackle will dramatically alter the way the Buckeyes look up front. Not only does that put a veteran back in the lineup with All-America potential, it also allows Ohio State to focus on the battle at right tackle and make sure that all the pieces on the depth chart are in the proper order.

Late next month, Ohio State will also officially welcome Jonah Jackson to campus, and that will give position coach Greg Studrawa another potential starter with experience in the Big Ten to work with when training camp starts. Jackson will likely slot into the mix at left guard, and solidifying that side of the line will ease a lot of minds in the Woody Hayes Athletic Center.

Adding those two not only fortifies the first-string group, it bolsters the depth significantly. With Wyatt Davis locked in at right guard, Ohio State is likely going to find itself with three capable starters vying for one open job at right tackle. Nicholas Petit-Frere would seem to have the inside track heading into the summer, but both Branden Bowen and Joshua Alabi turned in productive camps and have previous experience working in their favor as they compete for playing time. No matter who emerges, Ohio State will have steady backups waiting in the wings, with Bowen in particular bringing positional flexibility since he could line up anywhere other than center.

As for the middle of the group, Josh Myers has firmly taken control of that critical role anchoring the line. But again, help is on the way this summer with five-star signee Harry Miller potentially showing up ready to play a supporting role behind Myers thanks to his crash-course, FaceTime education this spring.

For the guys already on campus, the last month or so obviously wasn’t all that fun. But Ohio State will soon have everything it needs to get the unit ready to contend for championships again, and the fall should be a heck of a lot more enjoyable in the trenches.