Stay in touch or be left out because Ohio State recruiting is a 24-hour, seven-day-per-week obsession. What’s the latest news as the Buckeyes build for the future? Get that and more Sunday through Thursday on Lettermen Row. Thursday’s notebook takes a closer look at the biggest recruiting storylines surrounding the talent-rich visitor’s list expected for the Ohio State and Penn State game in Columbus.

Ohio State commitments who will be at Penn State game

Huge recruiting weekends like the one about to take place at Ohio State are important for a few reasons, and one of the biggest is that it allows for the large group of committed prospects gathering on campus a chance to build their relationships with each other — while also giving them a chance to serve as ambassadors for their future program.

So, while a lot of the focus on these mega-visit weekends is on the uncommitted folks — rightfully so — it’s the large group of verbal commitments in town that could make or break the future for the Buckeyes. Their efforts in recruiting peers, while building important relationships within their own class, can make a major difference in their future successes.

And there will be a significant number of Buckeyes verbals on hand this weekend in Columbus. Who will be there among Ryan Day’s committed prospects?

Starting in the Class of 2020, here’s who is expected to be on campus Saturday representing their future team.

All told, 14 of the Buckeyes 24 senior commitments are coming to town. Of the 10 not making the trip, nine are still playing high school football playoff games on Friday or Saturday with that being the primary reason they’re unable to make the trip.

Julian Fleming, the country’s top-ranked wide receiver, has not completely ruled out making the trip over to Columbus following his game. But it would require a very early morning drive to get to campus on time, and given the circumstances, it seems it would be a surprise if he showed up at this point. 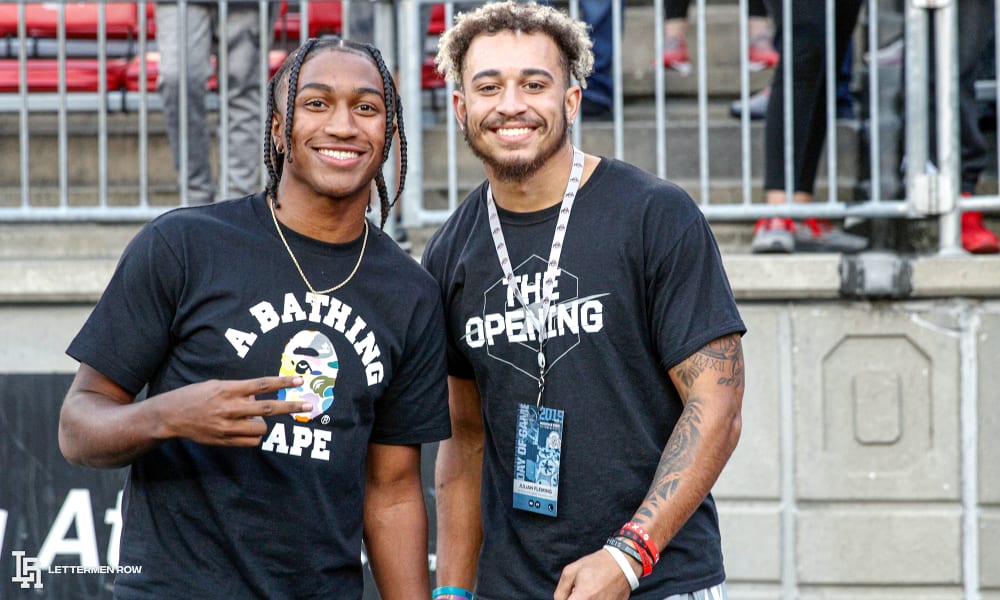 Lejond Cavazos will be on his official visit to Ohio State, which might draw his buddy Julian Fleming as well. (Birm/Lettermen Row)

The Buckeyes should not read too much into that or make any sort of leaps about what it means for Fleming’s recruitment or the strength of his commitment. If he doesn’t make it, it’s just simply a matter of convenience. He’d have to get on the road by around 4 a.m. to be on hand. But even with that being the case, Fleming being on campus wouldn’t be a total shock because it’s an opportunity for him to hang out with his good friend Lejond Cavazos — and I don’t think he wants to miss the official visit for his buddy.

Switching over to the Class of 2021, three of the Buckeyes six junior commitments will be in attendance.

As with the 2020 class, Kyle McCord, Marvin Harrison and Reid Carrico are not expected in Columbus as they continue their push to win state championships. Carrico plays on Saturday afternoon.

When it comes to the uncommitted players making their way to Ohio State on Saturday, it’s Winton Woods (Cincinnati) running back Miyan Williams that is going to draw the most attention as the program continues the search for a commitment at the position in 2020.

Williams confirmed on Twitter that he was still locked into the visit with a tweet on Wednesday.

It’s been nearly two months since Ohio State offered the 5-foot-10, 212-pound tailback, and this will be the first visit to the school for the Iowa State commitment since then. The tea leaves appear somewhat easy to read. Here at Lettermen Row, we’ve written repeatedly that if Williams opted for a visit to Columbus — especially one with his mother accompanying him like she will on Saturday — then there was some safety in assuming a flip to Ohio State would follow.

That’s not some sort of ironclad guarantee, though, because the Buckeyes are going to be tasked with proving to Williams and family that there’s a real plan in place for his development and use at Ohio State. And it will need to eliminate any sort of deep-seated belief that he’s just a backup plan for Tony Alford and the Buckeyes at this point.

That is the message the Cyclones will push, and the loyalty that’s forged after six months of being committed to Matt Campbell’s team isn’t going to wash away without some real confidence that Ohio State truly wantsÂ him — not just any random running back to fill the roster out.

Still, for the Buckeyes, the fact that the visit is happening is encouraging and illustrates that Williams has at least opened the door for Alford to prove what he’s been hearing since receiving his offer in September. 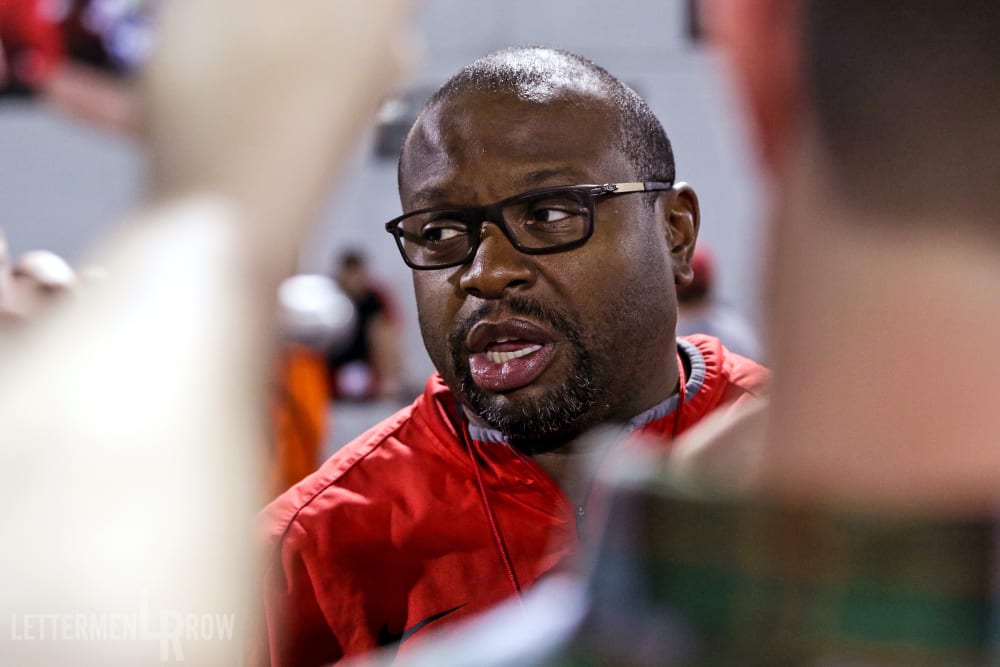 The list of offensive and defensive linemen coming to Ohio State this weekend is impressive, and I’m not sure which side of the ball is a better group. I do know that if these prospects lined up and played a good-old-fashioned game of tug-of-war, it’d be one heck of a battle for rope supremacy.

We’ve talked a little bit about the names expected at these positions already this week, highlighting some of the defensive line names on Tuesday and the offensive line on Wednesday. But I wanted to review them as the weekend approaches.

Here are the key names coming on the offensive line, a group that is highlighted by 4-star prospect Donovan Jackson.

The defensive line is also deep as a group this weekend, even without 5-star Tunmise Adeleye, who will not make his visit as planned.

That group could be even deeper, but there’s some uncertainty coming from Quince Orchard (Gaithersburg, Md.) 4-star Demeioun Robinson about his trip. So I’m going to keep him off the list until he confirms whether or not he’s certain about making the visit. Robinson, if he makes the trip, would definitely be one of the primary targets on campus this weekend.

There’s also been discussion about 2020 Utah lineman Xavier Carlton making his official visit to Ohio State this weekend, as we’ve mentioned for months could happen. The Buckeyes have watched Carlton closely for a while now, and his recruitment is certainly one that bears watching if the visit comes to fruition as we have believed it will.

Again, as I’ve cautioned before and again this week, these lists are far from final and not even definite as travels plans often change on a whim

Predicting what a teenager is going to do is obviously a challenge. But it’s possible to read between the lines to make educated guesses based on what is known.

That being the case, there are a few prospects who I think could consider making a decision in their recruitment this weekend. The two most likely candidates are from close to home: Michael Hall and Tegra Tshabola.

Each player has a Buckeyes offer already, and this visit will be a repeat trip to campus for both. There’s no doubt that the lure of playing close to home in front of a raucous crowd is amplified on weekends like this one. It’s easy for kids and their families to step into the stadium and see a top-10 contest for all the marbles and let down the guard of practicality and patience and submit to the emotion of committing to the school they’ve always dreamed of playing for.

So, while I don’t think there’s anything imminent, there’s no reason to be surprised if anyone pulls the trigger this weekend — especially if it’s one of the in-state kids.

Other names expected at Ohio State for Penn State game

There are likely to be dozens of additional recruits in Columbus this weekend. Trying to name them all would be a fool’s errand, so we won’t attempt that here. But there are a handful of other names that have confirmed their plans so we can confidently state them here.

And there will be more. Stay tuned.