COLUMBUS â€” Ohio State has one of the best quarterback lineages in college football.

Since Ryan Day arrived in Columbus to coach the signal-callers, the Buckeyes have started J.T. Barrett, a career record-holder. Then Dwayne Haskins, a single-season record-holder. Then Justin Fields, arguably the most talented quarterback in program history.

The Buckeyes offense has been among the most potent in the country in the era of Ryan Day calling plays. It’s the same offense, no matter the quarterback. Sure, the offense evolved from a run-heavy Barrett offense to the pass-happy Buckeyes of 2018 and then the balanced attack with Fields over the last two seasons.

As a current three-man quarterback competition continues to unfold inside the Woody Hayes Athletic Center, don’t expect the Ohio State offense to be dramatically different based on who wins the job between C.J. Stroud, Jack Miller and Kyle McCord.

It won’t change, but it will evolve.

“We’re still not there yet with these guys, figuring out where we want to spend our time in terms of emphasizing,” Day said as spring camp ended in April. “Our offense is our offense. It hasn’t changed from when J.T. was our quarterback or Dwayne was the quarterback or Justin was the quarterback. What do we want to emphasize? The plays really haven’t changed, but if you have 100 plays in a game or 80 plays in a game, what do you want to emphasize based on their strengths? 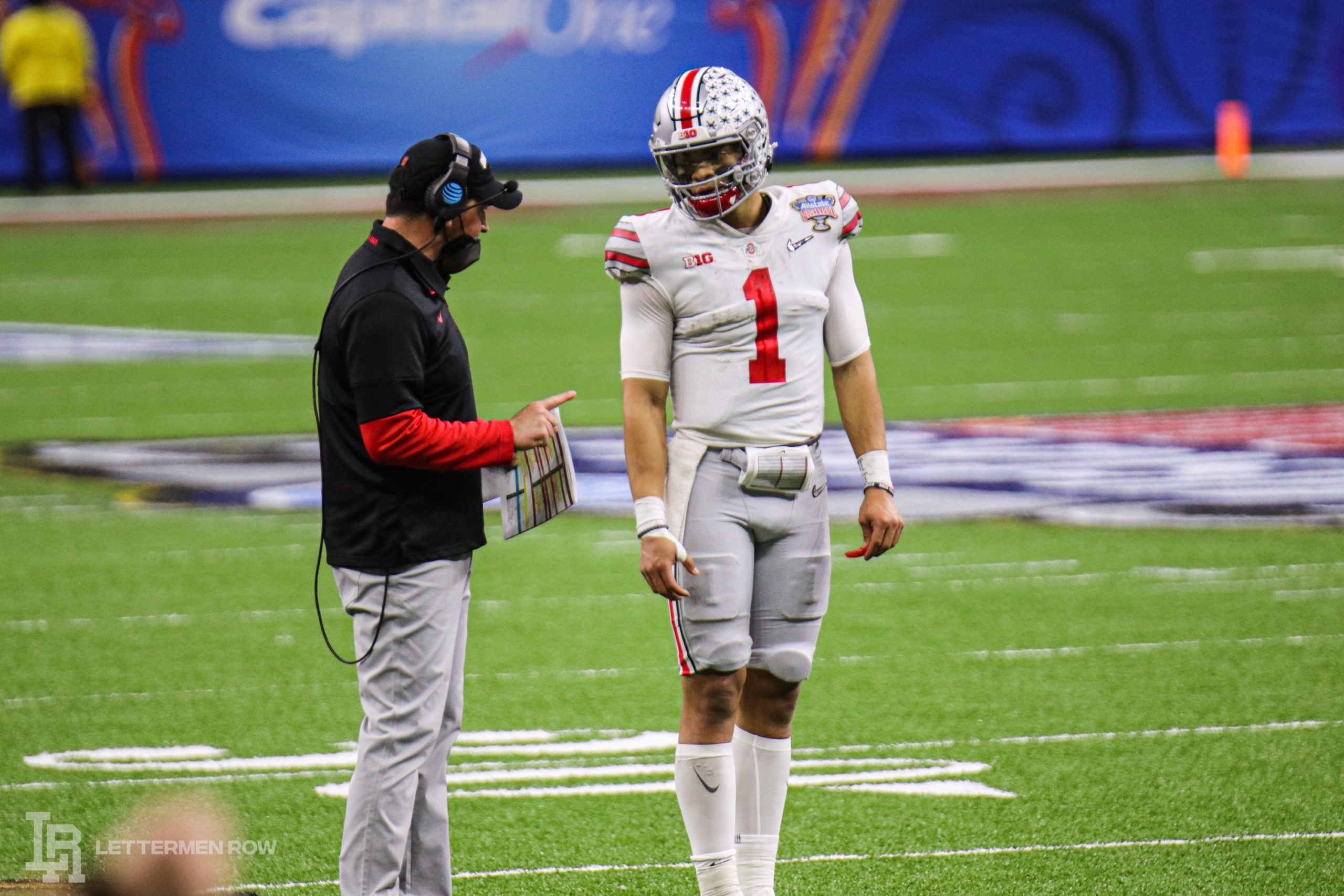 “Three different quarterbacks. Very similar, but all three have their strengths and weaknesses. So as we go into a game, we’re certainly going to do the things they do best. I don’t think I have the answer to that yet. Some of them do get the ball out of their hand quickly, and that’s good. I think they do have good accuracy underneath, but I also think they do a decent job down the field as well. In a perfect world, you’d like to do a little bit of both. And if that’s what we do, that’s what we do. Again, the strength of college football coaching is finding out what they do really well and emphasizing that. We’re still not there yet.”

Ohio State has staples of its offense. When Barrett was the quarterback, the Buckeyes ran touch passes and short routes. Under Haskins, Ohio State ran mesh routes to torch opposing defenses. With Fields, Day and offensive coordinator Kevin Wilson dialed up downfield shots and outside passing concepts.

Now on his fourth quarterback at Ohio State, Day won’t change his offense. But it will go in a new direction as either Stroud, McCord or Miller are taking snaps. 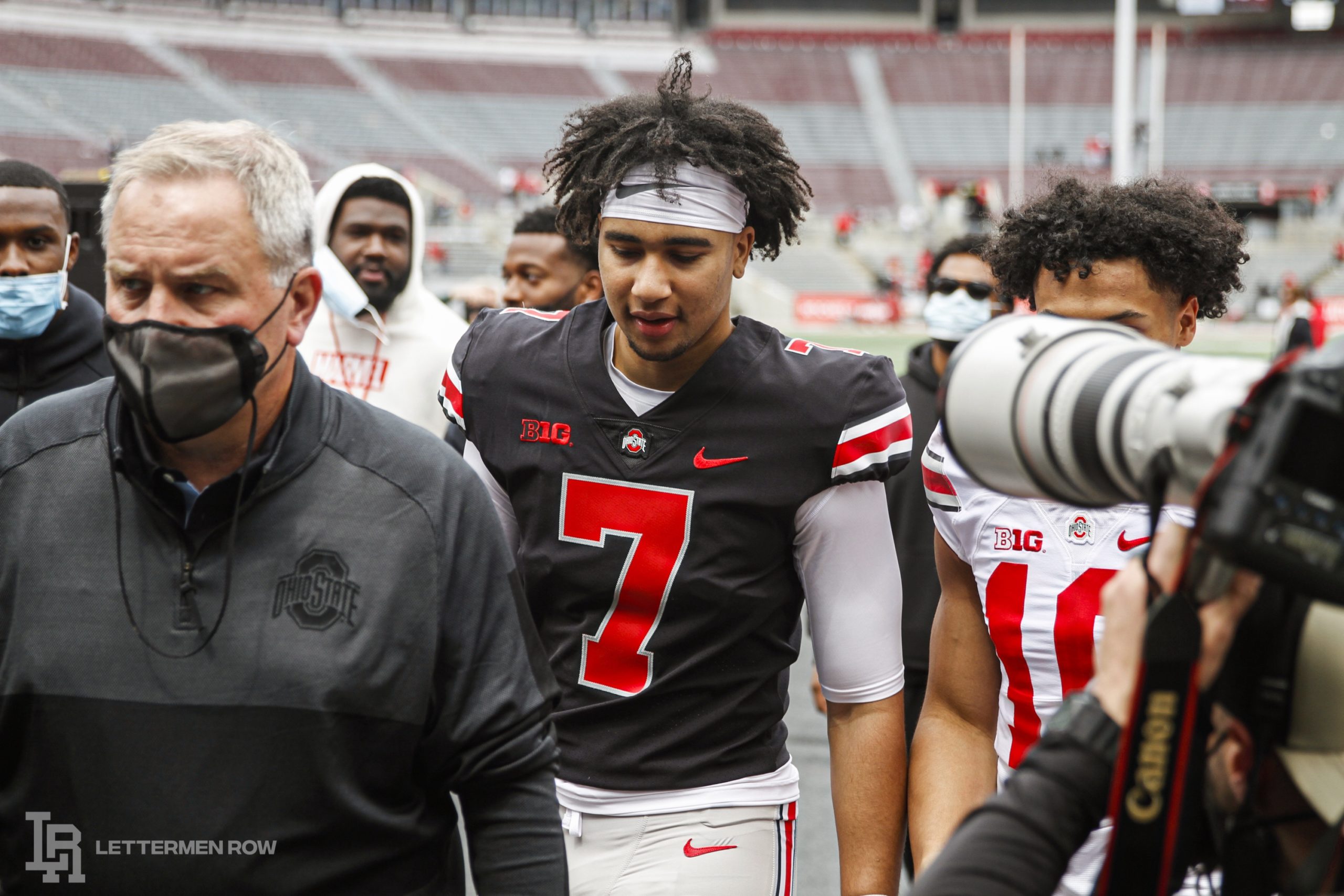 That’s one of the main goals of the summer and into fall camp: Figure out who the starter is and tailor the offense to that quarterback’s strengths. It’s a plan with proven results, and it will likely work again this season as the Buckeyes expect to reach another College Football Playoff.

“To me they just need time,” Wilson said early in spring practice. “I know Coach Day and [quarterbacks coach Corey] Dennis, with some comments about me, we’ll always play to their strengths. I don’t think the offense ever changes, but you play always to what the offensive line can do and what the quarterback can do. We’ve got plenty of time in the spring and summer workouts to figure that out. They look good through winter and we just had one practice with a few throws. To say strengths of a guy or weaknesses, we know a little bit more about C.J. and Jack. But at the same time, we missed a lot of those guys. They missed last spring. They missed last preseason. All those reps. And when we’re getting into game week back then, Justin was getting 80 percent of the reps in practice.

Ohio State has been successful under Ryan Day due to the lineage of quarterbacks and the offense’s ability to adapt to those quarterbacks. With a new starter this fall, that plan won’t change.

The results likely won’t, either.