COLUMBUS — Roster management is not new to college football, and it’s certainly not something that Ohio State is unfamiliar with at this point.

The Buckeyes have played that game as well as any program in the country since Urban Meyer’s arrival in November of 2011 — and, for the most part, it has worked in their favor.

Meyer’s plans always included a four-man scholarship quarterback room, and that roster was as talented as any in the country between 2013 and 2018.

The depth chart in Columbus and the procession of talent to Ohio State was no doubt one of the reasons why Mike Yurcich was so eager to leave a comfy gig in the Big 12 to head to the Big Ten. Now, with his first spring behind him, the Euclid native is looking at things through a whole new lens.

Why does Ohio State need a second quarterback?

The position room that Yurcich walked into in December is a whole lot different than the room the first-year Buckeyes quarterback coach and passing-game coordinator manages now.

Gone is Heisman candidate Dwayne Haskins, who was contemplating a return to Ohio State for his redshirt junior season after smashing every school and Big Ten record in his one full season as a starter. Gone is former Gatorade and U.S. Army National Player of the Year and three-time national high school champion Tate Martell. Gone is trusty, talented freshman Matthew Baldwin, who was plucked away by Day from Colorado State in December of 2017. Baldwin was Day’s his first college quarterback signee and a passer the Buckeyes believed would develop into a multiyear starter in Columbus by the time his career was finished.

Plans change, of course, and Yurcich and Day learned that quickly in the last few months.

The quarterback room now consists of former 5-star All-American Justin Fields and recent Kentucky graduate transfer Gunnar Hoak, two scholarship quarterbacks whoâ€™ve never played a down of real football at Ohio State competing for the starting job. If Fields is as good as advertised, heâ€™s likely to bolt from the program following the 2020 football season and Hoak has no option but to do the same.

That means if thereâ€™s not a second quarterback added to the Class of 2020 by Ohio State, Day and the Buckeyes will enter the 2021 football season with potentially just two scholarship quarterbacks on the roster: Jack Miller, and Class of 2021 commitment Kyle McCord. Regardless of those players’ potential, that isnâ€™t going to cut it.

We may no longer live in the world of four or five scholarship quarterbacks on a collegiate roster. But having only two canâ€™t work, even if it includes players with elite talent like Miller and McCord. 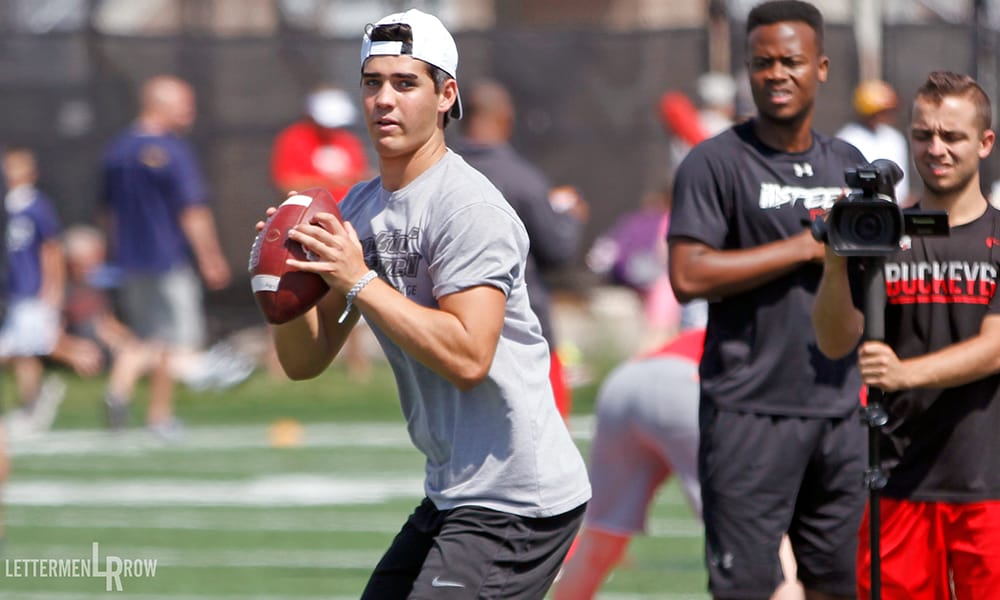 What does Jack Miller think about a second QB option in 2020?

To quickly put to bed any notion that Miller would prevent the Buckeyes from signing a second 2020 quarterback, let’s go right to the source for his opinion on that topic.

“I donâ€™t really care who they bring in,” the 6-foot-4, 210-pound Arizonan told Lettermen RowÂ in the spring. “I will compete with anybody.â€

Miller wants to be the guy for the Buckeyes, and he is. There is no confusion about that, but it’s clear to even the most personally affected party that the need for a second signee is real.

The biggest problem Ohio State will face in adding a second quarterback isn’t a concern about scholarship numbers. More pressing than that: How will the Buckeyes land a player used to being the most important guy on his team who knows he’s being brought in as a backup plan?

Even though it’s clear that Miller is the lead dog in this equation, any scholarship prospect offered by the Buckeyes will have just as good a chance to become the eventual starter in Columbus as the 4-star Scottsdale gunslinger will.

Ohio State has already begun to kick the tires on a few young prospects, including Kade Renfro from Texas. He’s committed to North Texas, but he’s a 3-star prospect who Florida State and other big-time programs are aware of already. His recruiting profile could change quickly. Renfro really threw the ball well during a June camp in Columbus, but he doesn’t seem keen about being a second option or backup planÂ at this point.

The same day that Renfro impressed the Buckeyes, Pickerington Central quarterback Demeatric Crenshaw was also working for Day’s attention. And though he didn’t throw the ball as well as Renfro, he’s got a solid reputation as a leader and playmaker for one of the Midwest’s best programs.

There are other players out there who will catch the Buckeyes interest. C.J. Stroud dominated theÂ Elite 11 so thoroughly that Day reached out to him during the event. He’s got big-time potential.

Ohio State has offered Grayson (Loganville, Ga.) 3-star C.J. Dixon, and he visited the school last summer. But he’s not been back, nor has his development happened how a lot of analysts expected it would. Still, he’s got a lot of raw talent and could still get some attention when or if the time comes for Ohio State to decide on a second guy.

There are dozens of others, really. In the summer of 2017, nobody around Ohio State had heard of Matthew Baldwin — and anything can happen from here to signing day.