The speculation, debate and conversations about Ohio State never end, and Lettermen Row is always ready to dive into the discussions. All week long, senior writer Austin Ward will field topics about the Buckeyes submitted by readers and break down anything that’s on the minds of the Best Damn Fans in the Land. Have a question that needs to be tackled, like the one today about Justin Fields, Matthew Baldwin and the quarterback battle? Send it in right here — and check back daily for the answers.

I'm probably minority, but I wasn't overly impressed with any of the QBs Saturday. Is there anything to be concerned about, the D just improved, or is it just unfairly comparing to Haskins type expectations?

The comparisons are unavoidable, especially when one of the quarterbacks trying to replace Dwayne Haskins shares a personal trainer with him and the relationship between the two helped bring Justin Fields to Ohio State in the first place. But measuring either Fields or Matthew Baldwin against a Heisman Trophy finalist is also unfair for a number of reasons — and one spring camp was never going to allow them to stack up favorably against a guy who is about to be a first-round draft pick.

The truth is that neither of those Buckeyes are likely to match what Haskins did for the program any time soon, as Ryan Day frequently tried to remind anybody throughout camp. Both Fields and Baldwin are only a year removed from high school. Fields is learning a new offense after transferring from Georgia with limited experience. Baldwin spent his first year in the program recovering from a knee injury. No matter how much potential both of them bring to the position, it’s going to take time, patience and a lot of work before either could get to a Haskins-type level of production.

Certainly it would have been premature to expect that in the spring game. But just to be fair, Haskins didn’t exactly look ready for that responsibility at this time a year ago either when he completed 9 of his 19 attempts in the camp-closing scrimmage — with many observers coming away more impressed with Joe Burrow. 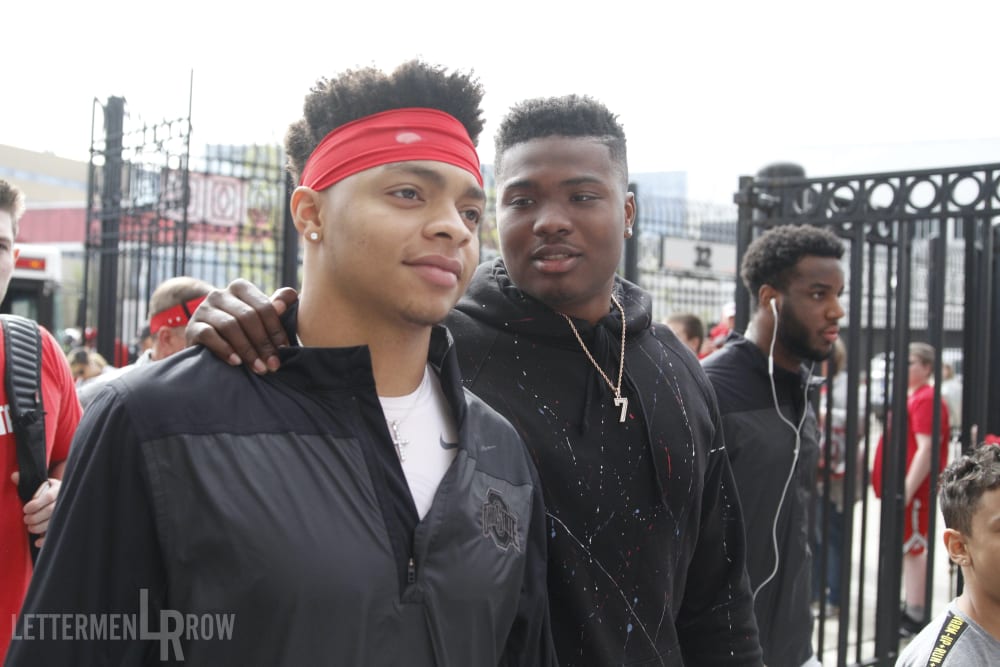 So, what happened in the Horseshoe for the most part should be ignored. That probably goes double for Fields, since what really sets him apart as a quarterback is his dual-threat ability, and it’s hard to get a feel for that when defenders aren’t allowed to tackle him and Ohio State is encouraging him in that setting to use him arm as often as possible.

â€œI think they both did a good job today, they both flashed at times,â€ Day said. â€œStill a work in progress, still have work to do. But I thought they gave some of the receivers a chance at times, and sometimes itâ€™s hard when youâ€™re not in a tackle situation â€” is it a sack, is it not? Justin can kind of create on the edge a little bit, and we didnâ€™t get a chance to see that as much. I thought Matthew made a couple really nice throws down the field, but we turned it over a couple times and threw it to them.

â€œWeâ€™ll keep looking at it, but I thought both of them had positive days.”

The heavy lifting this spring had already been done before that final game, and that’s really where Fields had made his mark and appeared to claim an edge in the head-to-head battle with Baldwin. But Day has also repeatedly stressed that he doesn’t see clear separation between the two of them at this point, which sets the table for them to keep competing in training camp.

No matter who wins the job, Ohio State is going to be in good hands. But as Haskins can attest, it takes thousands of reps in the system before getting truly comfortable, and Fields and Baldwin are only starting that journey. Day has earned the benefit of the doubt with his development plans at quarterback, and there should be no concern about the talent level at Ohio State thanks to the athleticism Fields brings or the strong arm of Baldwin.

That doesn’t mean either of them are ready to break the records Haskins set last season. But there’s also no reason for the Buckeyes to be worried.