Zach Harrison is no longer the highest-ranked recruit in Ohio.

He’s no longer the freakish athlete from outside of Columbus who has the country waiting on his college decision.

And he’s about to no longer be just an Ohio State signee.

Now he’s just another college freshman getting ready for his first day of classes. He’s a big, talented kid who will be searching for the buildings that house his classes and looking for help getting around campus so that he can make it to meetings at the Woody Hayes Athletic Center on time.

Harrison told Lettermen Row last week that he will do his best to get adjusted to his new life but knows it’ll take a little time.

â€œIt will be new and Iâ€™ll have to adjust,â€ Harrison said. â€œI think Iâ€™ll be all right once I get the hang of everything.â€

Fortunately for the incoming freshman, there will be plenty of help. Ohio State is a well-oiled machine, and that will provide plenty of assistance when it comes to the day-to-day grind of college life. On the football side of things, there are at least two guys eager to provide some guidance as well: Jonathon Cooper and Chase Young.

Cooper and Young are both former 5-star prospects who made their way to Ohio State as well. And thanks to the leadership of guys like Dre’Mont Jones and Nick Bosa, they were allowed to get comfortable in the program while they were waiting for a chance to excel on the field. Cooper, like Harrison, is from Columbus and arrived on campus in January, making his transition significantly easier. 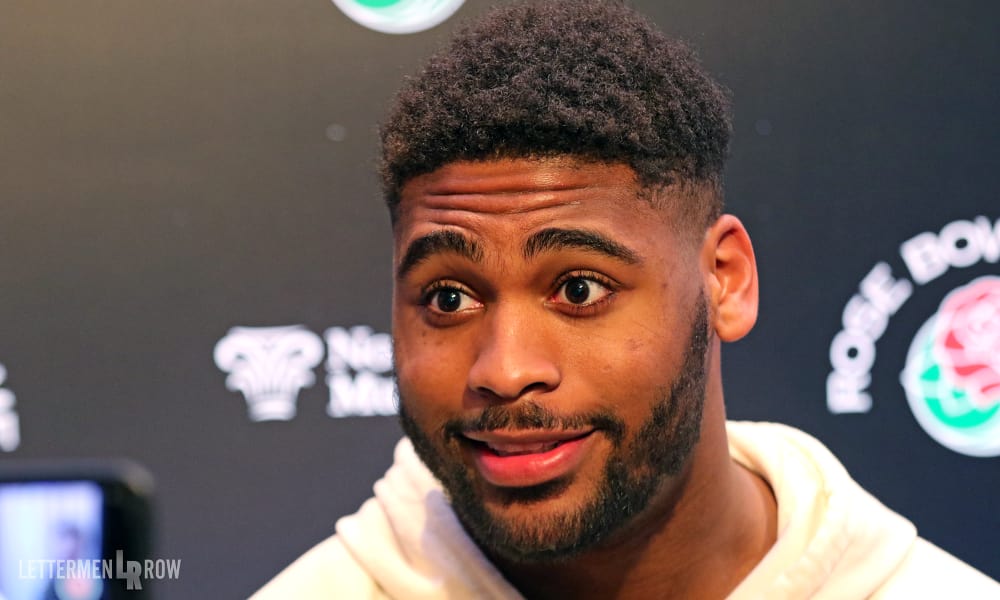 Jonathon Cooper believes Zach Harrison will use guys like him to get comfortable at Ohio State. (Birm/Lettermen Row)

“It’s difficult, you know, because you’re going in and then you’ve got classes and weightlifting and you’re a freshman so you have to find your way and what’s going on,” Cooper said. “But I found big brothers, so I had like Tyquan [Lewis], Jalyn Holmes, Sam Hubbard, Tracy Sprinkle, my big brothers. I latched onto them.

“They told me how to do it. I feel like Zach Harrison is going to do that to me and the others.”

There’s also a wider support system which will do the same for the 6-foot-5, 250-pound incoming freshman: Ohio State as a whole — including the fans who will be behind Harrison, but also won’t hesitate to remind him of his 5-star expectations.

“Zach Harrison is walking into Ohio State. He’s walking into a place that’s going to show him love, but also going to get after him, toughen him up,” Cooper said. “From what I’ve seen he’s a great kid, and I think he’s ready for it. I think he’s excited to come here. We’re excited to have him. I can’t wait to get in that weight room with him.”

Young wasn’t able to enroll early, but physically he’s much more similar to Harrison than Cooper. The soon-to-be junior and likely first-round pick in the NFL Draft of 2020, Young is eager to work with Harrison in person.

“That boy’s fast. Zach is definitely the top recruit we have, the best player in the nation,” Young said. “I just told him, when he comes in, just be ready to work.Â We’re excited. He’s going to be a very good player, especially under [Buckeyes defensive line] Coach Johnson. He’s going to craft him into a beast, and I’m definitely ready to take him under my wing and watch him bloom.”

The two did have some conversations during the Lewis Center product’s recruitment, but Young tried to stay away from any attempts to influence Harrison’s decision.

“I know it was us and The Team Up North,” Young said. “I would hit him up time to time. Every time he would come up, he would hang with me. That’s all I could do. The rest was all on him.”

Zach Harrison has been all smiles since making his college decision. (BIrm/Lettermen Row)

Now that a decision has been made, Young wants Harrison to know what he’s in for heading into his first offseason conditioning program. And that starts with a reminder that that recruiting is over.

“All these coaches being all nice to him [is done],” Young joked. “Once he gets here, he’s definitely going to come into the system and be treated like everyone else. I guess that’s the biggest obstacle a freshman would face, but that’s not really an obstacle. He knows what he’s coming in for, and he wants to be coached by the best.

And that, according to Harrison, is why he picked Ohio State to begin with.

â€œI decided on Saturday [before signing day],â€ Harrison said. â€œThe final factor is that I want to reach my potential to the fullest. I knew to do that I had to be coached by the best and thatâ€™s Coach J.”

Now it’s time to get started.