Ohio State: Observations from first practice of spring for Buckeyes
Article written by:

COLUMBUS — Ryan Day strolled around the field, monitoring the entire field just like the old boss at Ohio State used to do.

His first spring practice leading the Buckeyes was underway, and it was clear from the start that he was no longer a coordinator as he gathered up the team and gave a quick speech to open the festivities.

There is a long way to go at Ohio State just this spring with 14 more workouts ahead of it just this month and in April. And even by the end of this stretch, Day isn’t likely to have a finished product on his hands with the two-time defending Big Ten champions.

But every season starts somewhere. And Lettermen Row watched the first hour of camp on Wednesday morning and came away with these observations.

Buckle up for quarterback battle at Ohio State

Justin Fields is the favorite to win the starting job, and he was first in line to take snaps as Ohio State took the practice field for the first time with the Georgia transfer. He wasn’t perfect with his accuracy, which is to be expected for a variety of reasons during the first session of spring. And the same is true for Matthew Baldwin, with both potential starters for the Buckeyes looking either a little nervous or rusty as the competition to replace Dwayne Haskins opened. Considering the complexity of the playbook, the need to develop timing with some new receivers and a process that might get complicated at times with a patchwork offensive line, it might take some patience before Fields and Baldwin can get comfortable. A clear-cut resolution might not come for a while. 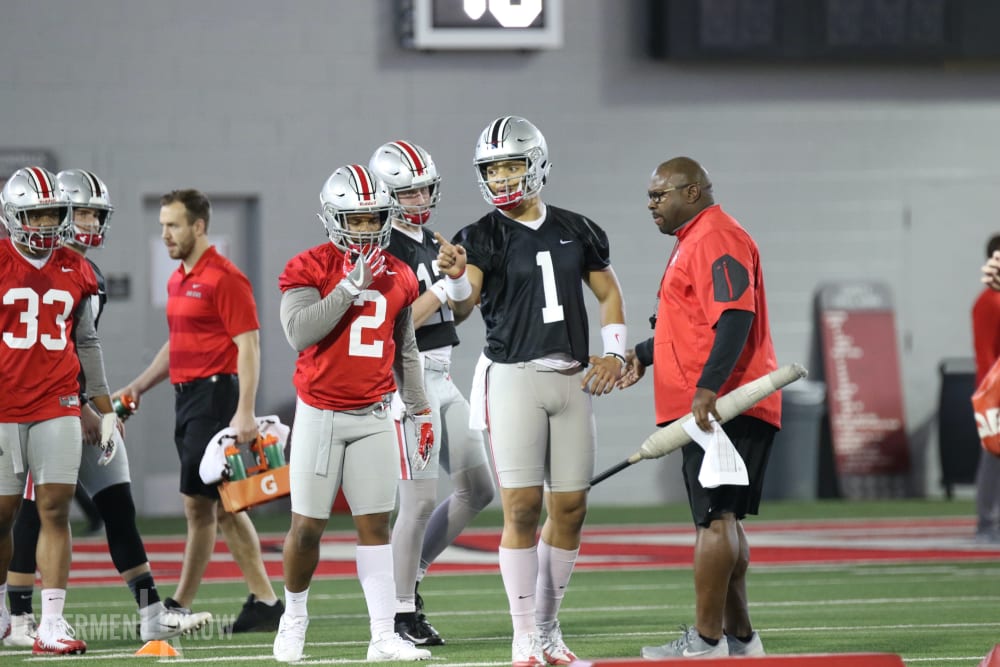 Offensive line is in transition for Buckeyes

The offense took the field with exactly zero returning full-time starters thanks to the ongoing recovery of left tackle Thayer Munford that will leave him sidelined throughout camp. And with Rutgers graduate transfer Jonah Jackson not arriving until summer, that’s another potential starter who won’t be participating this month, which will force position coach Greg Studrawa to do some juggling up front. Gavin Cupp was working with the first unit at left guard, Branden Bowen led the way at right tackle, Joshua Alabi filled in for Munford and Josh Myers was anchoring the group at center. That group might look different over the next few weeks at times as the Buckeyes sort through the options, but that debut was a clear reminder of how much work is ahead for that unit.

After the previous defensive staff took what appeared to be far too long to recognize his potential, the new assistants seem to know exactly what they have in Brendon White heading into spring. As the Buckeyes look to tweak the defense and feature a hybrid defender who can play both safety and outside linebacker, White was at the head of the line and popping up all over the field during the portion of practice open to the media. Ohio State is still in the initial stages of installing the new defense, but White is going to be a critical part of the plans. 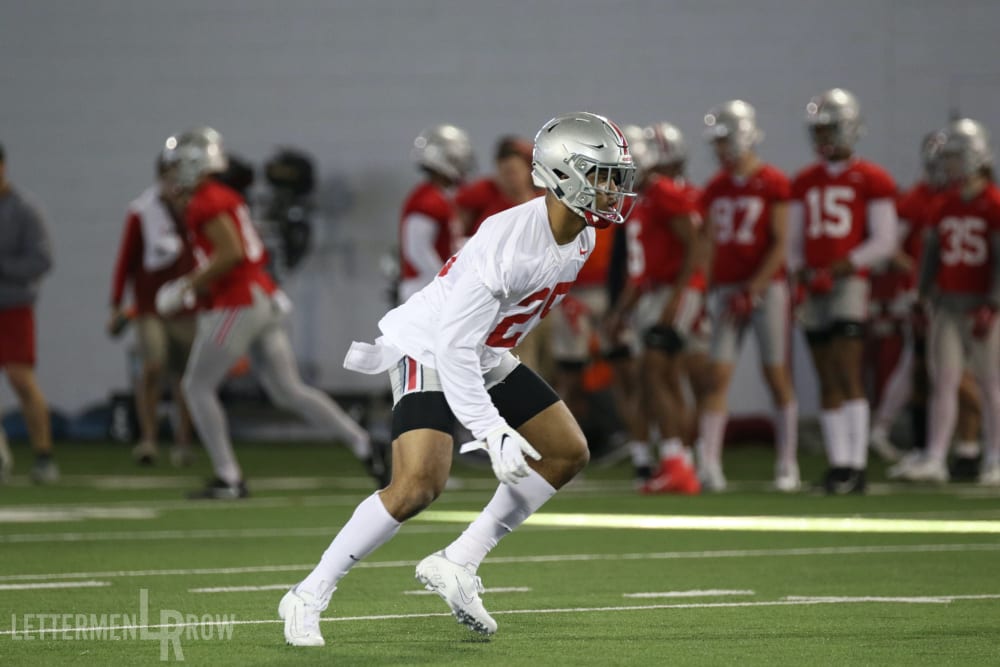 The individual drills and just a small handful of reps can be taken with a grain of salt. But it’s hard to ignore athleticism when it flashes, and Jaelen Gill wasted no time doing that at the Woody Hayes Athletic Center on Wednesday. Whether it was snagging an impressive one-handed catch despite coverage draped all over him or blazing past a safety with a perfect wheel route, Gill looked ready to make a jump into the rotation and help as an H-back after a year of developing in the background. Obviously Gill will need to stack good days on top of each other from here out to carve out a role, but there’s no doubt he has the ability.

Buckeyes secondary can be elite

Even without their leader at safety participating, it’s already safe to project that the pile of talent Ohio State has assembled for a couple new defensive assistants in the secondary could pay off in a major way. Second-year safety Josh Proctor looks ready to turn the corner physically, and working him into a role alongside Fuller and a combination of White and Shaun Wade gives the Buckeyes options on the backline. And Wade’s versatility also makes him a rotation candidate with Jeffrey Okudah and Damon Arnette at cornerback. Arnette, in particular, looked sharp as camp opened and appears to have something to prove after his previous inconsistency.