Ryan Day shows he can motivate Buckeyes as well as he draws up plays
Article written by:

The speculation, debate and conversations about Ohio State never end, and Lettermen Row is always ready to dive into the discussions. All week long, senior writer Austin Ward will field topics about the Buckeyes submitted by readers and break down anything that’s on the minds of the Best Damn Fans in the Land. Have a question that needs to be tackled, like the one today about the Ohio State andÂ the motivational success of Ryan Day? Send it in right here — and check back daily for the answers.

We always have that one bad game every season… maybe this year will be different!

The last coach at Ohio State was famous for his motivational tricks, psychological expertise and a knack for finding the right button to push.

Turns out Ryan Day isn’t too shabby in that department, either.

If the first-year Buckeyes coach was widely viewed as a savvy recruiter and brilliant offensive play-caller prior to taking over for Urban Meyer, Day is quickly proving that he’s also got the ability to keep the entire program on task and fired up even for games that look like little more than tuneups. After pulling out the white-belt mentality card last week, Day has a team that was just as juiced to go compete for a Tuesday practice as it was to take on Northwestern before blowing the doors off them Friday night.

Observers both inside and outside the Woody Hayes Athletic Center have noticed a unique vibe around the Buckeyes this season, and that is certainly a fair assessment even if it’s hard to quantify. Day is every bit as competitive as Meyer was, but his personality is markedly different — and clearly resonating with this group of Buckeyes with his more laid-back, tough-love style. 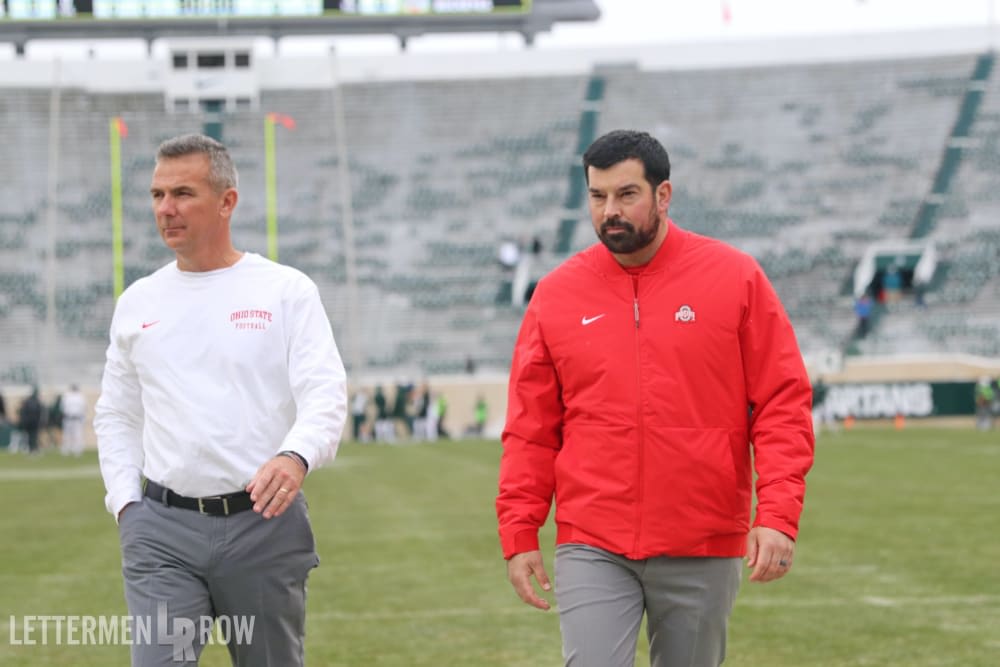 Ohio State coach Ryan Day has picked up right where Urban Meyer left off for the Buckeyes. (Birm/Lettermen Row)

Obviously Meyer’s way worked just fine with a national championship and back-to-back Big Ten titles before retiring after the Rose Bowl. But trying to copy Meyer’s off-the-charts, run-through-a-wall intensity just wouldn’t fit Day well, and simply being himself is one of the best choices he made while building relationships with the Buckeyes and finding out what makes them tick. Sometimes a fresh start and a new perspective is healthy for a football team — even when that means replacing a coaching legend with three national-title rings.

When Ohio State players are embracing and mimicking the message from the coaching staff down the way they have so far this season, it’s clear that Day is having an impact. Now, does that mean the Buckeyes are immune to having a bad game? Certainly not, because this is college football, where unpredictable outcomes happen every week simply because there are 20-year-old athletes playing the game. The trick for championship teams, then, is making sure those efforts that dip a little bit don’t turn into losses.

The Buckeyes are undoubtedly the most talented team in the Big Ten once again and are legitimate threats to win the College Football Playoff. That was also true the last two years, but they let their focus drop the one time they couldn’t afford to do it and paid the price. Maybe the players who went through those painful losses learned the lesson for themselves and didn’t need Day to set the tone for them. Or perhaps it’s time to start giving him credit for more than developing quarterbacks, installing the offense and finding a few gems on the recruiting trail.

Either way, how Ohio State performs on Saturday against a wounded Wisconsin animal is ultimately going to be a reflection on the coach. And so far, Ryan Day has shown a remarkable ability to get the Buckeyes on the same page — and keep them there no matter who the opponent is.