The speculation, debate and conversations about Ohio State never end, and Lettermen Row is always ready to dive into the discussions. All week long, senior writer Austin Ward will field topics on Urban Meyer and the Buckeyes submitted by readers and break down anything that’s on the minds of the Best Damn Fans in the Land. Have a question that needs to be tackled, like the one today about the future of the quarterback position for Ohio State? Send it in right here — and check back daily for the answers.

I know a lot will depend on who the QB is next year but how will the overall offense scheme be different from Urbana offense? Will we ever see a QB run the 25 times a game?

Ohio State could spin the clock back a year and restore the threat of the quarterback rush if that’s ultimately what Ryan Day wants to do. But after seeing the power-spread truly unleashed thanks to the arm strength of Dwayne Haskins, is that really the best way forward?

That depends on a few factors, obviously, starting with whether or not the Buckeyes can reel in Justin Fields on the transfer market. And if that’s the case, then the odds are good that the Ohio State attack will look similar to the one Day coordinated this season while turning Haskins into a Heisman finalist — and there will be no turning back for the foreseeable future at the position.

Could an Ohio State quarterback carry the football 25 times per game again? If Tate Martell’s dynamic athleticism becomes too much to ignore and wins him the job, then yes. Day and Kevin Wilson have both demonstrated throughout their careers that they will adapt the system to suit the strengths of the personnel. But first it has to be proven that Martell’s best traits make Ohio State better than building around the passing ability of Matthew Baldwin or a transfer to be named later. 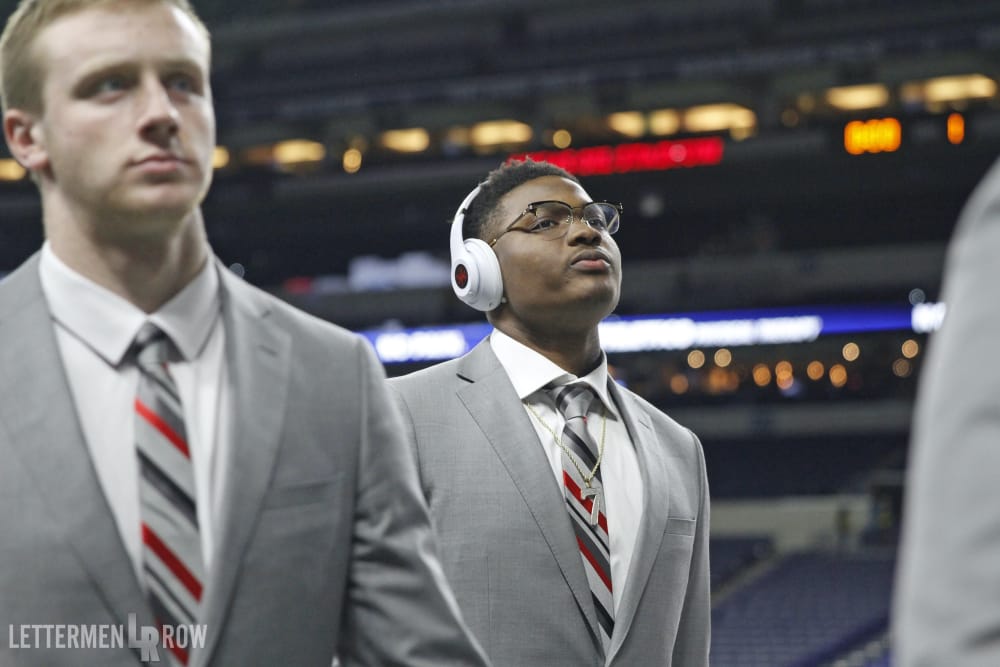 “I think the number one thing you look for is some sort of extraordinary trait,” Day said. “From there, though, there’s a whole other list of things that we go through. Certainly arm talent, certainly accuracy is a huge part of that. But the number one thing we want is some sort of exceptional trait. And J.T. [Barrett] had one and Dwayne had one, and I think one of our strengths on offense is the ability to adjust the offense to fit the quarterback and to fit our personnel. I think in college that’s really, really important because sometimes if you’re looking for a specific style, there may not be one in that class.

“So let’s go find somebody that has some sort of extraordinary talent and then build around it.Â But that being said, being able to throw and accuracy is really high up on the list.”

That’s an important caveat Day tacked on when he evaluated the position on Wednesday during signing day, particularly as the Fields-to-Ohio State rumors were gaining steam amid the almost-certain decision Haskins is set to make about jumping to the NFL Draft.

The Buckeyes have no shortage of talented running backs to handle the work on the ground. And even after possibly losing four productive wide receivers this offseason, the cupboard isn’t even close to bare in that unit, either. With so much talent at the skill positions, it seems likely that the best way forward for Day is by rolling with somebody who can distribute the football to generate big plays — without needing to continually call the quarterback’s number to produce them.

That formula did produce a great deal of success for Barrett and Braxton Miller before him, there’s no doubt about that. But it also got a bit stale at the end and became increasingly clear that upgraded passing ability was going to be needed for the Buckeyes to take the next evolutionary step on offense.

Now that they’ve done that, would Day really go back?Â Probably not, which is exactly why Fields is on Ohio State’s radar and why Baldwin is crucial to the future of the program as well.

Quarterbacks who can run are a bonus. But that’s not the exceptional trait the Buckeyes should be building around.