COLUMBUS — The nonstop sprint for Ryan Day is over, and he can at least take a quick breather.

Then his marathon with Ohio State can really begin.

The timing of his promotion taking over for the retiring Urban Meyer combined with the early-signing period on the recruiting calendar didn’t really leave any time at all for Day to ease into his new position leading the program. And based on the work he and the rest of the coaching staff did in securing so many highly-touted signatures on Wednesday, there weren’t many wasted moments over the last couple weeks — and the future for the Buckeyes remains in good hands.

“Exhausting, yeah,” Day said on Wednesday afternoon. “It started right that first day when we hit the road after the Big Ten Championship game, and it didn’t stop until now. It’s been a whirlwind.

“Most people [on visits] had their phones out, they would look at their phones and they would turn on their phones and just kind of scroll through all the questions they had while we were sitting in the home — because they knew we didn’t have a bunch of time. But the first one that came up was exactly that: Your direction and what you see the vision for the program? And the way that I answered that was that we think we have the most comprehensive program from A to Z in the country and the infrastructure is here. The plan is not to change that.”

That produced some similar results for the Buckeyes, who once again cleaned up on the recruiting trail despite having relatively little room to work with on the roster. As part of the continuing coverage of the 2019 recruiting class, Lettermen Row is diving into the Wins and Losses so far to see exactly where Ohio State stands moving forward.

Let there be no doubt: Landing the five-star defensive end from Olentangy Orange was a massive victory for Day. There was understandably reason for concern about the future recruiting efforts for Ohio State since it’s losing one of the most successful coaches in that department in college football history. But playing from what was perceived to be from behind, the Buckeyes closed strong down the stretch to land one of the most coveted targets in the country — beating out rival Michigan and Penn State in the process. Harrison has the potential to be one of the best pass-rushing threats in the country, and the Buckeyes had every reason to celebrate on Wednesday afternoon.

The possibility of the wheels coming off was real for Ohio State, particularly when the hopes of such a small class were built around long-time commitments from five-star prospects Garrett Wilson and Harry Miller. It’s not much of a coincidence that Day played a critical role in landing the wide receiver and center, respectively, in the first place. And it’s another reminder of why Gene Smith acted quickly when Meyer’s retirement became the likely outcome to install Day in his place. Without keeping those two guys at the head of the class along with linebacker Cade Stover and and Mentor products Ryan Jacoby and Noah Potter, the Buckeyes could have been left in desperation mode.

There wasn’t much surprise when defensive back Jordan Battle ultimately flipped to Alabama, so Ohio State has been preparing for that move for a couple weeks now. Honestly, the Buckeyes shouldn’t have been all that surprised that quarterback Dwan Mathis would leave them at the alter since he had already done the same to two previous schools, even if that now creates an obvious hole on the depth chart that must be filled. But overall, Ohio State won’t complain all that much about going through this dramatic transitional period and only winding up with two guys falling out of the signing class down the stretch. And there might actually be some positives that come out of those decisions. 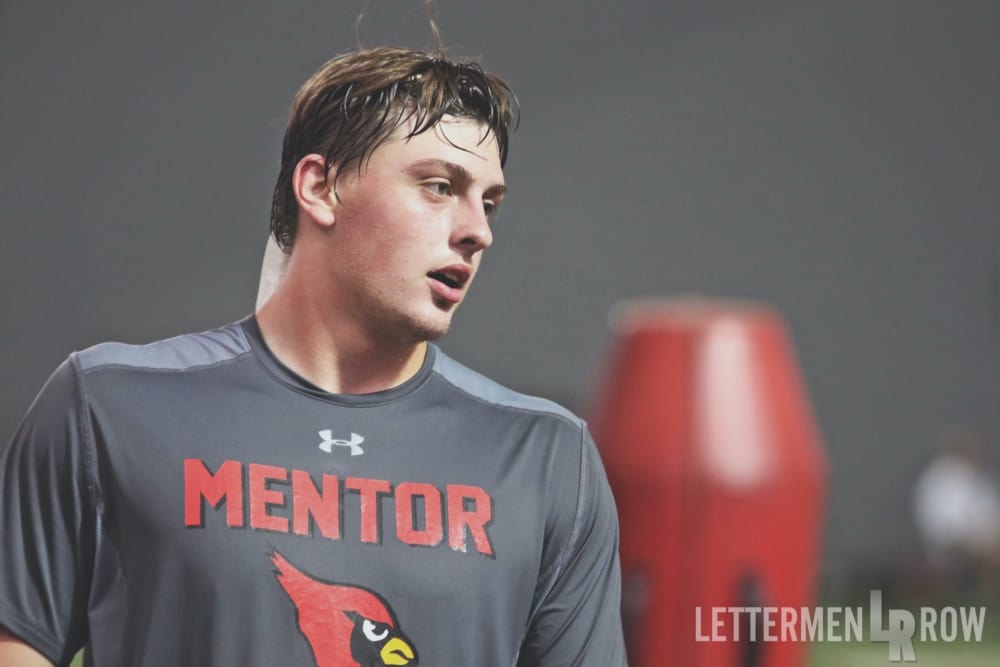 Ohio State held on to a key commit in Noah Potter, who could be a star on the defensive line for the Buckeyes. (Birm/Lettermen Row)

WIN: Ohio State can be factor in intriguing QB market

The race is officially on for potential Georgia transfer Justin Fields, and Ohio State is absolutely going to be a contender to land him. Losing Mathis to the Bulldogs added a little extra spice to the proceedings, since it opens up the possibility that the Buckeyes might just be trading the former commit for one of the most gifted prospects at the position in the country. Ohio State has plenty to sell when it pitches Fields, but the same will also be true for any graduate-transfer passers that become available or anybody else the program might pursue over the next few weeks. Once Dwayne Haskins officially declares for the NFL Draft as expected, there is playing time potentially available with no experienced quarterback on the roster, Day’s offense has proven to be one of the most position-friendly in the country and there is an abundance to talent on hand to work with. The Buckeyes should be able to make a big-time pickup in one way or another.

Recruiting is always an inexact science in the first place, and even ranking teams for what they do on the field is a thankless job. But looking at the recruiting rankings and seeing Ohio State at No. 12 does a little bit of a disservice to the whole process since the program again stockpiled enough blue-chip players to keep contending for championships but was hindered by the small size of the class. The Buckeyes can make themselves feel much better by reflecting on those back-to-back Big Ten championships — and the last two recruiting classes which are among the best ever signed in program history. And looking at a per-player basis, Ohio State would be right back in its familiar spot among the top-five classes in the nation.