COLUMBUS — The competition doesn’t truly begin until the pads are on at Ohio State.

But every season, every position battle and every camp has to start somewhere. And the first two workouts before spring break have certainly helped set the tone for the Buckeyes.

The energy of a practice at the Woody Hayes Athletic Center remains as impressive as ever at the beginning of the Ryan Day Era, and there are still plenty of holdovers from the way Urban Meyer ran the program to help assure a smooth transition. It probably doesn’t even hurt that Meyer himself can pop in to watch the Buckeyes, like he did on Friday.

But the opening couple workouts of the 15 on the schedule also left no doubt that Day is in charge. And that is just one takeaway for Lettermen Row as it reflects on What We Learned during the opening week of spring practice.

Ryan Day is comfortable in charge of Buckeyes

Few jobs come with more pressure or enormous expectations than being the coach at Ohio State, and that can certainly be an adjustment when the realization hits. But Ryan Day has the benefit of having lived that for three games on an interim basis last year, and he also has enough familiar support around him now that he appears completely at ease in the spotlight as he takes the reins permanently. He did joke that he has to remind himself to walk around to monitor the entire team and check in on the defense, a significant change from just leading the quarterbacks and coordinating the offense. But other than that, Day is carrying himself with the exact same personality that he showed as an assistant, which bodes well for his future. 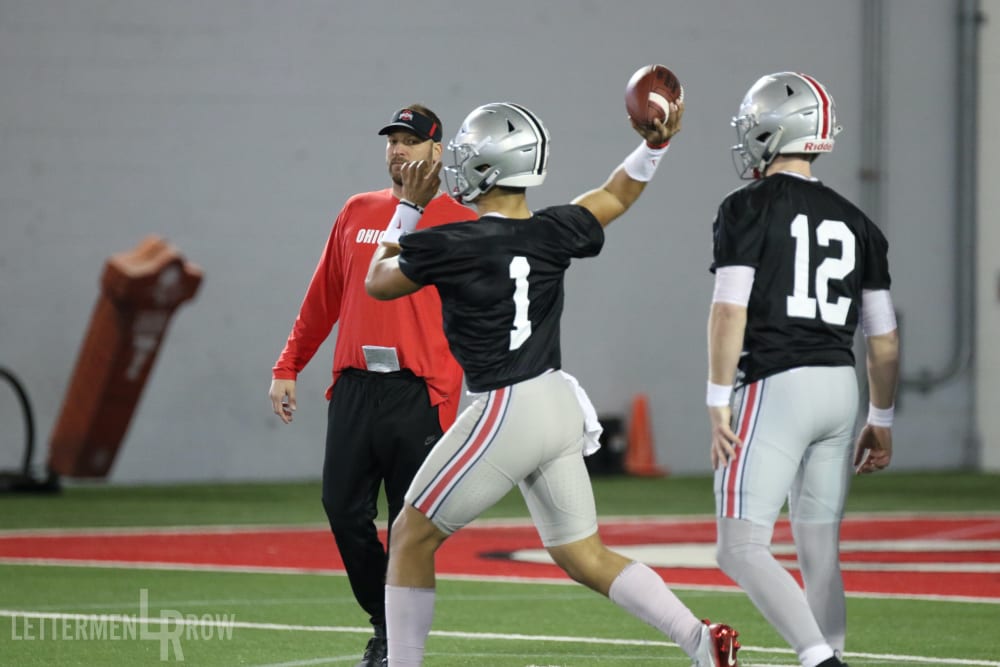 Ohio State quarterbacks Justin Fields and Matthew Baldwin are competing in the spring for the Buckeyes. (Birm/Lettermen Row)

A battle at quarterback is a good thing for Ohio State. It’s a sign of depth, it will push both passers to perform and eventually it ensures that the right guy is running the attack. Is Justin Fields the favorite to win the starting job? Yes, and he’s taking the first-team snaps during the open periods of practice so far. But writing off Matthew Baldwin would be a mistake, because his strong, accurate arm, clean bill of health and knowledge of the playbook make him more than capable of handling the job if the Buckeyes need him. There’s no need to rush for the Buckeyes, and embracing a competition is in the best interest of the program.

The installation process is in the early stages for Ohio State as it revamps the defense, and it’s still hard at this point to tell exactly what the finished product will look like. Partly that can be attributed to the fact that the Buckeyes have enough talent assembled to unveil just about any kind of system they want, and a couple guys with enough versatile athleticism to line up all over the field give the new coaching staff flexibility. Is Brendon White a safety or a Bullet hybrid linebacker? Should Shaun Wade be at corner, safety or lined up in the slot in nickel? Which linebacker spot suits Baron Browning best? One way or another, it’s already becoming clear that Ohio State is going to get creative with the personnel. 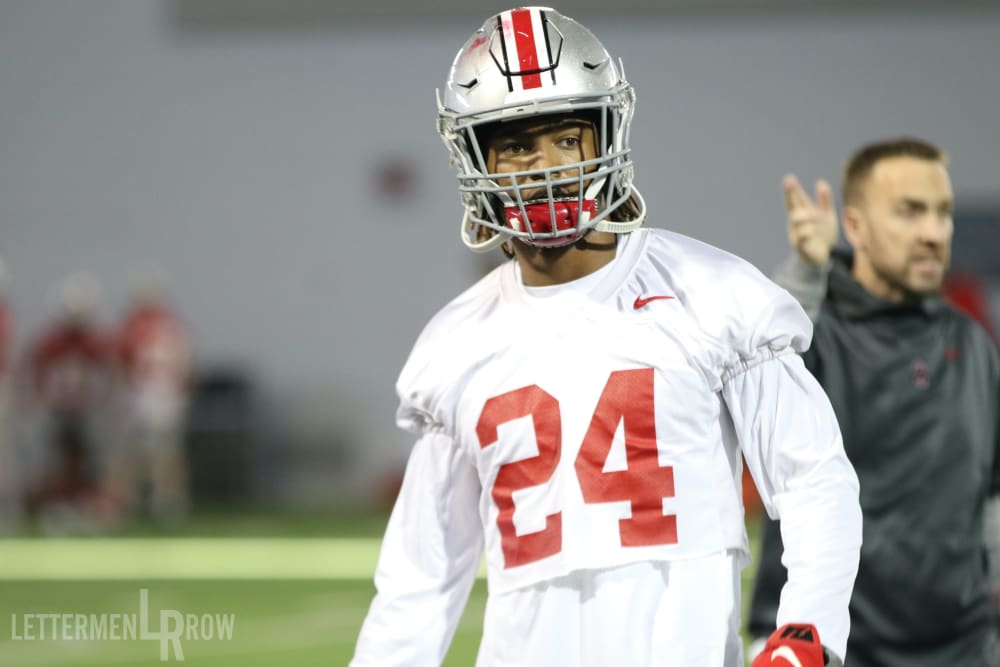 By now the annual conversation about using the tight ends more in the passing game is surely getting old at Ohio State. So, until that happens, it’s probably best not to predict a dramatic uptick in targets for that unit. But it certainly could happen, and it’s not necessarily because Jeremy Ruckert is trying to push his way into the lineup and show off what he can do as a pass-catching weapon. In fact, Ruckert is still coming out third in drills behind Luke Farrell and Rashod Berry, signaling some impressive depth at the position which will also allow Ohio State to tinker with different packages on offense. Farrell appears to have used last season’s experience and the winter conditioning drills to take a step forward, the physical presence of Berry is undeniable — and Ruckert looks much more comfortable moving around now that he has a year under his belt. The production should go up for the tight ends, but all three will be a factor no matter what given their importance as blockers as well.

Look out for Branden Bowen

Finally healthy, clearly motivated and apparently in the best shape of his life, Branden Bowen is staking an early claim on the key right tackle position in the Ohio State renovation project on the offensive line. The battle for starting jobs up front is fascinating this spring with no full-time returning starters on the field while left tackle Thayer Munford recovers from injury. There is added intrigue at tackle with Munford out, since that gives Ohio State two potential options to start on the right side the chance to compete on the field at the same time. Bowen and Joshua Alabi are at the head of the list right now with Nicholas Petit-Frere also trying to make a case. And while Bowen’s previous stint at guard before his leg injuries initially made it seem like he could be a safe option to kick back inside, he appears to be intent on thriving on the outside.