COLUMBUS — The silence has been broken at Ohio State.

No, there is still no update on the Urban Meyer investigation. And releasing a letter from the desk of acting head coach Ryan Day still isn’t the same as having a press conference.

But after two weeks of training camp and now at the midway point before the Buckeyes open the season against Oregon State at the Horseshoe on Sept. 1, there is at least some information coming out about the work the program has been doing recently. So, what was in Day’s breakdown of Ohio State that might actually mean something for the reigning Big Ten champions?

Here are a few things we learned.

The situation at quarterback is unchanged for Ohio State

There is no surprise that Ryan Day wouldn’t have a major update when it comes to his position group with Dwayne Haskins putting his stamp on the offense and Tate Martell pushing for playing time behind him. But it is notable that true freshman Matthew Baldwin is still “another couple of weeks” away from being at full speed after the surgery to repair the ACL he damaged at the end of his high school career. That could be a key factor in how the Buckeyes proceed with Martell’s workload, since it doesn’t have much depth or experience in reserve if something were to happen to Haskins. 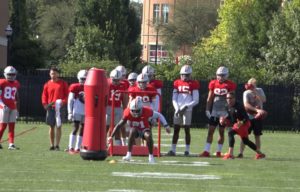 It hasn’t taken long for Brian Hartline to make a splash in his new role as Ohio State’s interim wide receivers coach. His intensity has been unmistakable to anybody who has seen him operate on the practice field, and it appears he inherited even more depth than expected with the Zone 6 unit. The veteran presence obviously isn’t a secret since the Buckeyes brought back everybody from that meeting room last season. But now with C.J. Saunders, Chris Olave and Jaelen Gill making an impression, Hartline might soon be needing to figure out how to rotate as many as nine different targets through the lineup.

His career has definitely not played out how Dante Booker envisioned at Ohio State, but the clock hasn’t run out on it yet. It seemed like one way or another that the fifth-year senior and the Buckeyes were heading for a separation after his up-and-down campaign last season, and Urban Meyer even had to publicly shoot down reports that Booker was looking to transfer. Instead, he’s back and being listed as a possible factor in the competition for playing time at strong-side linebacker. Given all the attention on the new faces projected to be in the lineup, Booker is rarely ever mentioned as a candidate to help the Silver Bullets. But don’t rule him out quite yet.

The same vacant job that has consistently been pointed to as Ohio State’s biggest concern going into the season is still open. Isaiah Pryor still looks like the most likely candidate to emerge with the top spot on the depth chart next to Jordan Fuller. But the way Jahsen Wint’s name was listed along with Pryor suggests that battle could still have an unexpected winner by the time the Buckeyes hit the field in September. Freshmen Josh Proctor and Marcus Hooker have both done “encouraging” things so far, but it appears that nothing has really changed yet at such a critical spot in the secondary.