COLUMBUS — Kevin Wilson finally has to plan for the weather at Ohio State.

Obviously the conditions always play some role in the play-calling and game-planning for the Buckeyes offensive coordinator, and that won’t change during a chilly trip to Michigan State.

But typically Wilson is sitting comfortably in the press box for Ohio State with nearby refreshments, a great view of the entire field — and ideal conditions.

“Man, you know it’s always 72 in the press box and just one mile an hour [wind] out of that vent,” Wilson joked on the Ryan Day Show on 97.1 The Fan on Thursday. “Jeez, thanks for reminding me. I’ve got to get my foot-warmers on, I guess.

“To be able to look at Justin [Fields] in his eyes and get a feel for what he likes or doesn’t like [is a plus]. Sometimes you’re sitting there and you have three or four calls for the next third down, here are a couple choices, what do you like? … It’s nice, and I think that was important to Ryan to be down there a little bit and interact with the other coaches like he does. I can get with Stud [offensive line coach Greg Studrawa] and look in his eyes. We always talk on the headphones. It is a little calmer in the press box and easier to call, and the view won’t be as good. So, I’m going to have to get some great information from our coaches up top because it is a different view.” 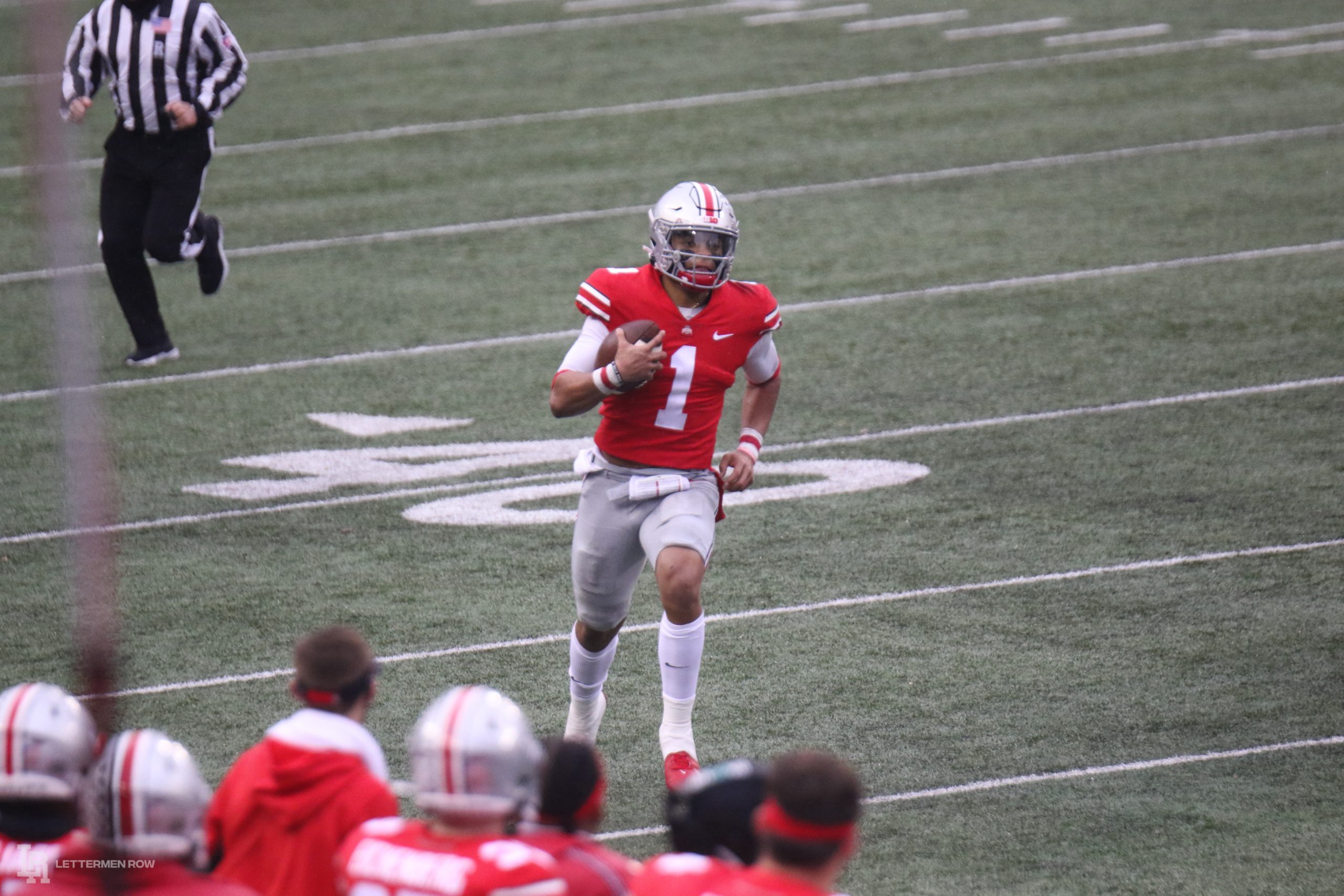 Ohio State quarterback Justin Fields will be able to communicate with Kevin Wilson on the sideline. (Birm/Lettermen Row)

Wilson has certainly seen the game from that vantage point before, spending half of his time at Oklahoma working from field level and obviously patrolling the sideline during his tenure leading Indiana.

But the loss of coach Ryan Day this week due to a positive COVID test has forced some adjustments for the coaching staff, leaving at least one headset up for grabs and already leading to change of location as Wilson takes his spot down on the turf.

Larry Johnson will serve as the interim coach, which still will allow Wilson to focus on running the offense — with Kerry Coombs doing the same for the defense. But with Day unavailable, he’s leaning heavily on that trio to keep the program steady in its return to action after last week’s cancellation at Illinois.

“Larry is going to be the head coach, so ultimately he’ll have the final decision,” Day said on his radio show. “But Kevin will give a lot of input in terms of timeouts, game-situation stuff. Kerry will as well, and the three guys will be on the headsets and they’ll discuss it. At the end of the day, Larry has the final say, but I think those guys talking together and communicating those things will be fine.

Nothing about this bizarre season during a pandemic has been ideal, of course, and scrambling with the routine and the coaching assignments is no exception.

There will have to be some adjustments with the roster as well. And while Ohio State has not confirmed its final availability report at this point, both Day and Wilson indicated the program would be short-handed — which obviously isn’t a surprise given the current 21-day rule the Big Ten has in place for players who have tested positive.

“That’s the way life is: You have a game plan, but you have to adjust,” Wilson said. “Not only do you have to stay positive [mentally], but you have to adjust and be tough about it. That starts with Coach Day’s leadership, the fight and what we’re about. I think since we’ve been here offensively, we’ve always been pretty adaptable, playing to the strength of our guys. Great leaders just manage stress. Anybody can lead when it’s 72 and sunny. What are you doing when things aren’t going well?

The Buckeyes might look a little different at the end of it. But they’re still on track to wrap it up with a game at Michigan State, and that’s all they can really ask for right now.