When the new special teams coach was hired, he could have guessed the question was coming. He was even prepared with an answer to the Buckeyes trivia before even being asked.

The question started with a statement Fleming was ready for: Ohio State hasn’t had a kick returned for a touchdown since 2010.

Then the question: What are you going to do about that?

“We’re continuing to work it,” Fleming said during his spring press conference. “You know, it’s been interesting. The past couple of years with the fair-catch rule being implemented, it’s kind of changed a lot of teams’ strategies. It’s changed a lot of teams’ time spent. It really has. And you know, the risk-reward is different now than it used to be. I’m sure you guys see it on our kickoff, too.

“It used to be a different weapon, and the fair catch rule just change a strategy a little bit.”

Ohio State routinely has an advantage on special teams. Urban Meyer prided himself on great work in the kicking game. Ryan Day does, as well. The Buckeyes have elite kickoff and punt coverage and win in those departments.

But they haven’t had a kickoff return for a touchdown since Jim Tressel was pacing the sideline. With all the talent assembled during the last decade in Columbus, the Buckeyes haven’t found a way to return a kickoff for a touchdown. 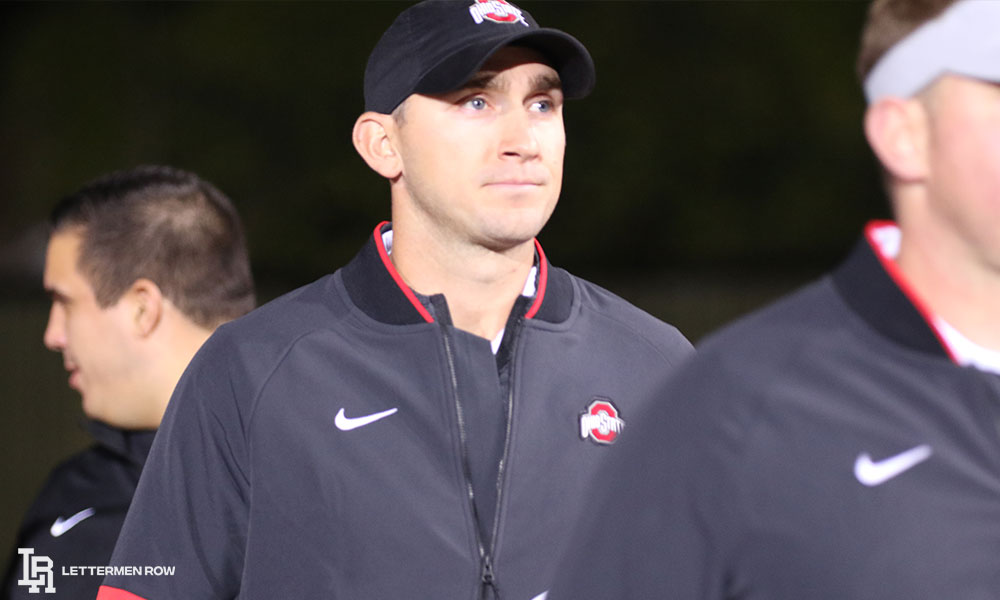 Fleming and the coaching staff are working to end that drought — while assessing the risk of attempting a long return.

“It’s our job to then find a way to get another advantage somewhere,” Fleming said. “We’ve had some big hits in the past. Last year, we had one against Indiana, and it got called back for a penalty. Then that just changes your whole mindset about what’s the reward you get. Our offenses have been extremely explosive. And that’s something that you just have to weigh.”

With the new rules in place, Ohio State hasn’t had many chances to return kickoffs. The Buckeyes have returned just 20 since the start of 2019, as most of those kicks sail into the end zone for touchbacks. When the kickoffs are returned, Demario McCall has handled most of them — and that’s been a risk of its own.

Garrett Wilson was a returner last season. Jaxon Smith-Njigba returned punts and could be an option on kickoff returns this season. The Buckeyes have plenty of talented options to break the scoreless drought.

“When you have an established crew that have done it, there’s less emphasis on the returning and more emphasis on the other parts of those phases — blocking and the time-ups and those type of things,” Fleming said. “We’ve tried out a bunch of different guys back there. And to be honest with you, I’m hoping that we don’t have the same concerns next year that we did last year. You could not imagine the number of guys that we practiced in those roles, just based on COVID scenarios that you just don’t know what’s coming next.

“So, we have a lot of banked reps from different guys getting reps back there. Running backs, receivers, defensive backs that are going to be available if we need them, because we’ve gotten a lot of reps. We didn’t emphasize the returner this spring. There’s not a lot of new development in who’s going to be back there.”

Can Wilson or Smith-Njigba be the answer? Or will Jordan Hall remain the answer to an Ohio State trivia question that seems hard to believe given the talent on the Buckeyes roster over the last 11 years?

Ohio State is searching for a way to return a kickoff for a touchdown and break the streak. The Buckeyes hope this season will be the time to do just that.

“We have really good returners — we have really talented guys that we can put back there, and we’ve worked hard this spring,” Fleming said. “And we’ll just see how it goes from here. But we’re working it. They changed a couple other rules in terms of your wedge fits and different things that make it a little more difficult than it used to be to get the thing started. So we just have to be creative.

“And to be honest with you, we’ve got to get some guys hitting some home runs.”