The speculation, debate and conversations about Ohio State never end, and Lettermen Row is always ready to dive into the discussions. All week long, senior writer Austin Ward will field topics about the Buckeyes submitted by readers and break down anything that’s on the minds of the Best Damn Fans in the Land. Have a question that needs to be tackled, like the one today about a pick to star in the spring game — like Garrett Wilson? Send it in right here — and check back daily for the answers.

Who looks like they could be the spring game breakout player?

Ohio State might want to pump the brakes on the hype train before it starts running out of control. But it’s probably already too late for that given how impressive the glimpses at Garrett Wilson this spring camp have been before he steps onto the big stage in the Horseshoe for the first time next weekend.

In a setting that favors the passing attack, with little for the veteran wide receivers to prove in an exhibition setting and with the early enrollee’s undeniable athleticism, the table will be set for Wilson to make a splashy debut. If for some reason there are betting odds somewhere on the MVP of the Ohio State spring game, put a couple bucks on the target from Texas.

Maybe that’s still more praise for Wilson than wide receivers coach Brian Hartline would like for a true freshman as he tries to simply ease him into the rotation for Zone 6. But even Hartline has been caught gushing at times about what the five-star recruit could provide for the Buckeyes right away this season.

“My best compliment for [Wilson], I told him: You don’t act like a freshman,'” Hartline said. “When he first got in, he’ll tell you that it was kind of a culture change. I mean, the kid should still be in high school. 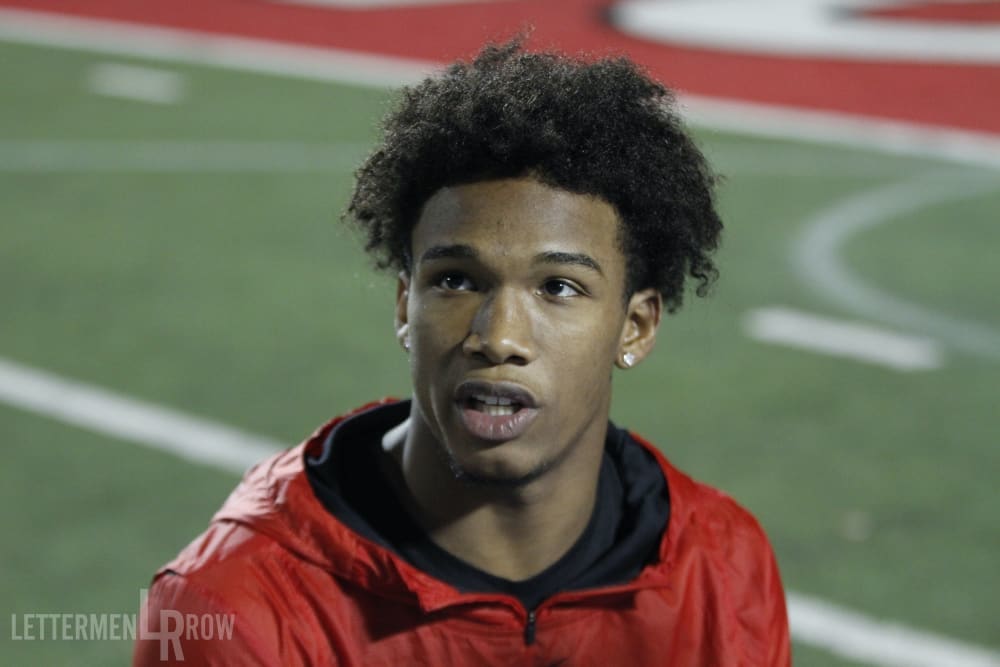 “But he’s just doing a phenomenal job. Whether I’m throwing him at ‘Z’ or ‘X,’ his mental retention is really good. He really wants to learn from the guys. He’s buying into the culture. So everything he’s doing right now is on the right track, and I’m excited to see him continue to take small steps.”

Performing in front of what is expected to be another huge crowd in Ohio Stadium would obviously represent another early milestone in Wilson’s progress, and there will certainly be chances for him to show what he can do. Whether that’s with his old high-school quarterback in Matthew Baldwin or catching passes from Justin Fields depends on exactly how Ohio State elects to format the game next week, and that should probably be another reminder that it’s a bit premature to be making any sweeping projections about a glorified scrimmage — let alone for Wilson’s career with the Buckeyes.

But there was a reason Garrett Wilson was so coveted on the recruiting trail, and he’s been backing that up in a hurry since arriving on campus in January and participating in his first camp starting in early March. Heading into the middle of April, expect to see even more of him — and for the buzz for his debut season to keep building.