Spotlight on Tate Martell only figures to get brighter at Ohio State
Article written by:

Is Tate Martel ready for the spotlight?

One way or another, Tate Martell was pretty much certain to see some action for Ohio State this season. His dynamic athleticism has always been appealing to Urban Meyer and an offensive staff that loves nothing more than cooking up innovative ways to get playmakers involved. So, no matter what happened in the quarterback race in the spring, Martell was going to get a chance to shine somehow.

But with the transfer of Joe Burrow and a bump up to the No. 2 spot behind Dwayne Haskins, the odds of Martell making a significant impact have only increased. The real issue now might trying to figure out if Martell being the backup might make him too valuable as a quarterback to risk putting him in extra packages or potentially lining him up at other spots like H-back.

Ohio State is expected to have a healthy Matthew Baldwin available in the fall after signing the product of Lake Travis (Austin,Texas) in December. But the most important position on the roster quite simply doesn’t have much experience or depth now that Burrow isn’t around. Is it worth it to expose Martell physically to get him a couple touches per game knowing he could be one snap away from becoming the starting quarterback? 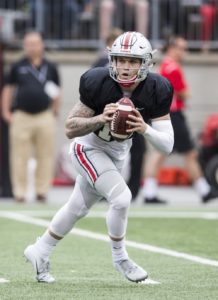 Odds are, the answer is going to yes for the Buckeyes for a couple reasons. But they might be a bit more conservative than they would have been previously. First of all, Martell has shown on the scout team and in glimpses during the spring game that he has special ability with the football in his hands. Secondly, after redshirting last season, any live snaps are going to help his development and phase out his inexperience on the field at this level. And then there’s never any guarantee when it comes to health anyway — saving Martell in case of emergency wouldn’t do anything to ensure that he would stay that way himself throughout the season.

But there are valid reasons that Ohio State doesn’t need to go crazy with his workload or out of its way to get him action. The Buckeyes have no shortage of talented skill players to work with already, and whether it’s the deep, veteran group of receivers or the backfield tandem of J.K. Dobbins and Mike Weber or even unleashing Demario McCall at H-back, all of those guys also need touches. It’s important to remember that there isn’t an endless amount of snaps available, so any that go to Martell are plays that won’t feature the other game-breaking Buckeyes.

There is really no doubt at this point that Martell is going to be on the field in some capacity this season. How heavily? That’s a question that there just won’t be a clear answer for until September.