The speculation, debate and conversations about Ohio State never end, and Lettermen Row is always ready to dive into the discussions. All week long, senior writer Austin Ward will field topics on the Buckeyes submitted by readers and break down anything that’s on the minds of the Best Damn Fans in the Land. Have a question that needs to be tackled, like the one today on the TCU matchup? Send it in right here — and check back daily for the answers.

The victories obviously count just the same, but exhibition season for Ohio State is over now. The good news for the Buckeyes is they got essentially everything they could have wanted from the tuneups against Oregon State and Rutgers to open the year — starting with what appears to be good health across the board and a bunch of starters who will still be fresh for Saturday night’s clash with TCU.

Is there any downside to the first-team units not playing four quarters in a game yet? Honestly, it’s hard to see how there would be for the Buckeyes for a variety of reasons.

First of all, Ohio State’s conditioning program under Mickey Marotti is on the short list for the most intense and successful in the country. Under his leadership, it doesn’t take playing 60 minutes on Saturday to build up the strength and endurance needed to deliver a complete effort start to finish, because Marotti makes his workouts tougher than any game could be. On top of that, the Ohio State coaching staff isn’t paying lip service when it talks about making practices at the Woody Hayes Athletic Center more intense than a game, which is why there are so many Saturdays where the players come out and call that day the easiest of the week. 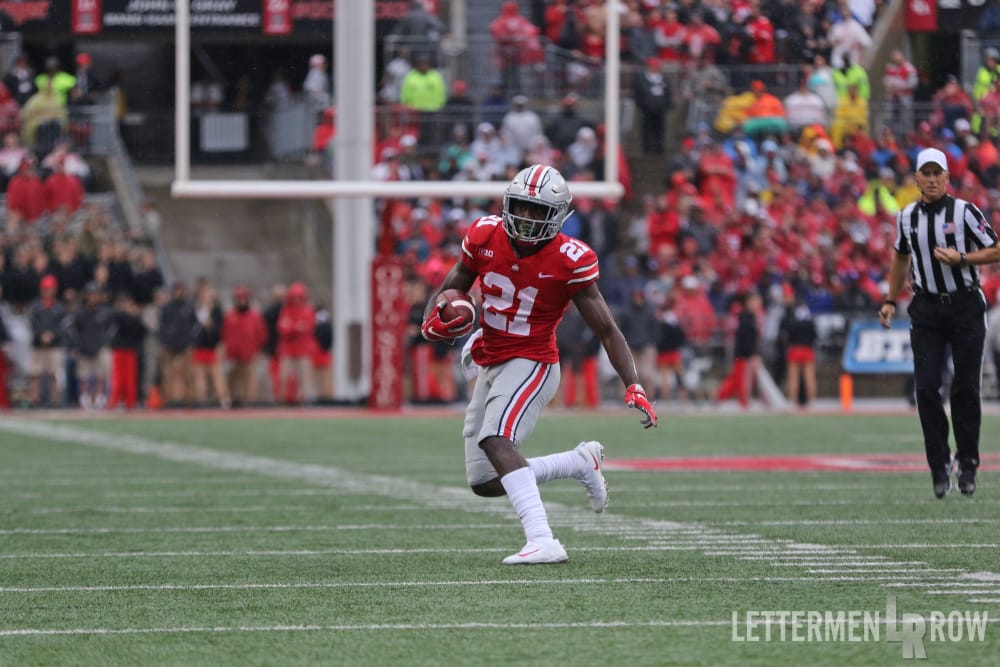 Parris Campbell has been in big-game situations before at Ohio State. (Birm/Lettermen Row)

Secondly, even with some new faces involved in key positions, Ohio State isn’t short on veterans who have been in these types of big-game settings and clutch situations previously. The group of captains at wide receiver, for example, won’t be fazed by needing to contribute in a tight contest in the fourth quarter given what Johnnie Dixon, Terry McLaurin and Parris Campbell have all been involved with in the past. And somebody like Nick Bosa will be practically begging for an opportunity to get more snaps and get on the field beyond halftime.

And one key factor working in favor of the Buckeyes thanks to the almost absurd level of depth in some areas: They rotate so freely and frequently at certain positions, the guys they want on the field when it matters most should be fresh in any game. J.K. Dobbins and Mike Weber are rarely ever going to feel overworked thanks to the timeshare in the backfield. Those captains at wide receiver get plenty of assistance from Binjimen Victor, Austin Mack and K.J. Hill. On that terrifying defensive line, Ohio State was always planning to roll Bosa, Chase Young and Jonathon Cooper at end, but it’s now getting help from freshman Tyreke Smith and can deploy Jashon Cornell outside at times as well. Make no mistake: That’s a potentially huge advantage when so few teams have enough talent to substitute like the Buckeyes do.

It also didn’t hurt that Ohio State had time to get safety Jordan Fuller back to 100 percent after a hamstring injury and didn’t need to rush a full workload back on Tuf Borland’s plate right away, allowing those starters to be healthy when truly needed.

Now, not everybody has performed on this type of stage with the stakes at the highest in the fourth quarter, and there are certainly Buckeyes who will need to show that they’re ready for it. Dwayne Haskins, for example, hasn’t yet had to lead the offense from start to finish as the starter, even if he’s shown he can handle a fourth quarter in adverse situation already in his young career. But odds are, Ohio State might embrace the opportunity to find out what it’s made of if TCU does indeed provide the kind of slugfest it’s expecting down at AT&T Stadium.

There’s only one way to get that experience, and the Buckeyes figure to be prepared for it after two weeks of easing into the schedule.