Have a question about Ohio State recruiting? This is the place for you, five days a week. Submit your questions on Twitter or on the Lettermen Row forums. Check-in daily to see what’s on the mind of Buckeyes fans all over the country. Today’s question is about 2022 Ohio State commitment Tegra Tshabola.

how good is Tegra? he seems to be more of a project than I anticipated when he first committed.
when we accepted such an early offer from an in-star guy, I figured he was aj instant impact player but that doesn't seem to be the case.

There is no position in football harder to evaluate than the offensive line.

Oftentimes, scholarship offers are extended on physical traits rather than football play, and that alone makes it unique.

So when a player like Tegra Tshabola, the massive 6-foot-5, 330-pound lineman from Lakota West (West Chester) High School, gets offered as early as he was, it’s understandable to be excited about his future. It’s a sign that the Ohio State coaches see him as a potential starter early in his career. That typically means a player has All-Big Ten upside.

But he’s still just a high school junior, and it’s important to temper expectations. He has a lot of work to do, both physically and mentally, before he’s going to be called upon by the Buckeyes. The good news? There’s plenty of time for him do that. Still, the country’s No. 16-ranked offensive tackle — according to theÂ 247Sports.comÂ composite rankings — shouldn’t be counted on as a freshman in Columbus. Even the country’s No. 1-ranked offensive tackles in the classes of 2018 and 2020 weren’t. Nicholas Petit-Frere and Paris Johnson didn’t get thrust into the spotlight, and there’s good reason for that. 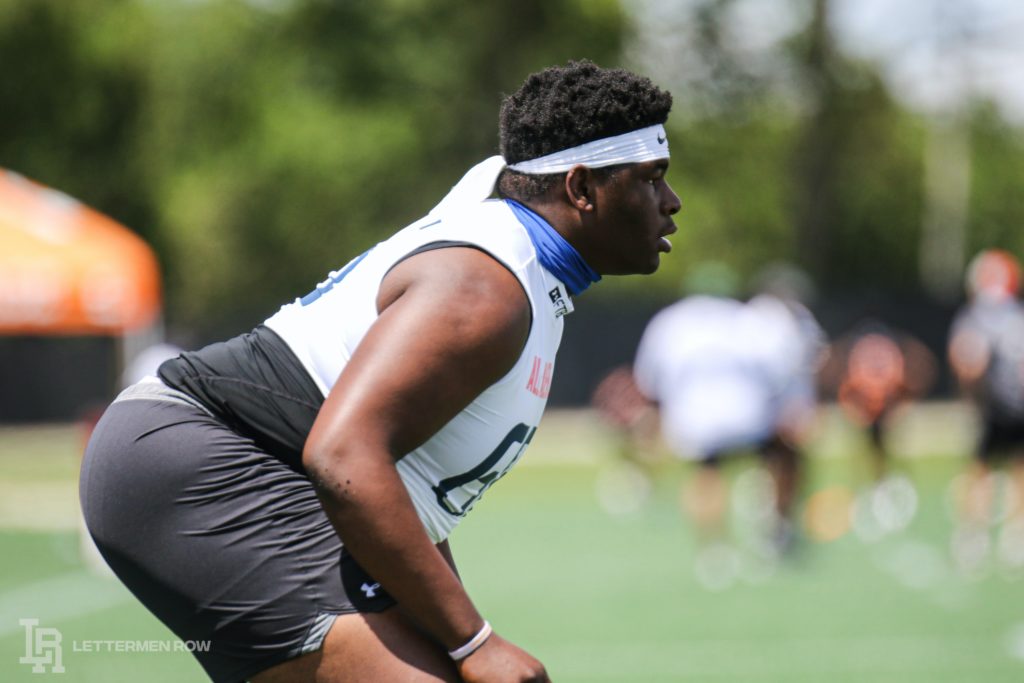 Tegra Tshabola has major athleticism and could grow into a key figure at Ohio State. (Birm/Lettermen Row)

Learning how to play the offensive line in college football program like Ohio State is hard.

“[Paris Johnson] did some really good things for us last year at guard, even in the short body of work he had,” Ryan Day said on Wednesday. “But he’s still young, and there’s still a lot to learn as an offensive lineman. Not very many guys in their first and second year have played a lot of football here on the offensive line.

“It’s a developmental position, so it’s going to take time.”

Ohio State signed six offensive linemen in its 2020 recruiting class. That group, outside of Johnson, is still waiting in the wings. Dawand Jones, Enokk Vimahi and Ryan Jacoby are still fighting for a chance to get on the field for the Buckeyes after signing in 2019.

Right now, there’s no need for Tegra Tshabola to be an instant impact kind of player for the Buckeyes. He isn’t a surefire offensive tackle, will have to develop his body to get into college shape and will need time to adjust to the speed of the game at Ohio State.

That doesn’t mean he’s not going to be a good player for the Buckeyes. He just doesn’t have to be right away.