Not the Silver Bullets. Not any of the associated names with Ohio Stateâ€™s respective position groups.

No, Teradja Mitchell shared a more all-encompassing descriptive of the Buckeyes and how they overcame much adversity, on and off the field, to terrorize Northwestern in the Big Ten Championship and a earn a berth in the the Rose Bowl against Washington on New Yearâ€™s Day.

â€œDefinitely the brotherhood, long live the brotherhood,â€ the 6-foot-2, 236-pound freshman linebacker said. â€œWe just stayed together through everything no matter what adversity hit. Godâ€™s plan; we just believe in what God has and just believing, all we can do.

As Mitchell, a consensus four-star recruit in the 2018 signing class and Rivals.comâ€™s No. 1-ranked inside linebacker, assessed his debut season for the Buckeyes after their conference title, he championed the camaraderie the players established away from the field — across all position groups.

â€œWe spent almost 24-7 it seems like, just developing relationships off the field,â€ he said. â€œGoing to the movies, doing things like that. Thatâ€™s big, because you need to be able to trust your brother next to you.â€ 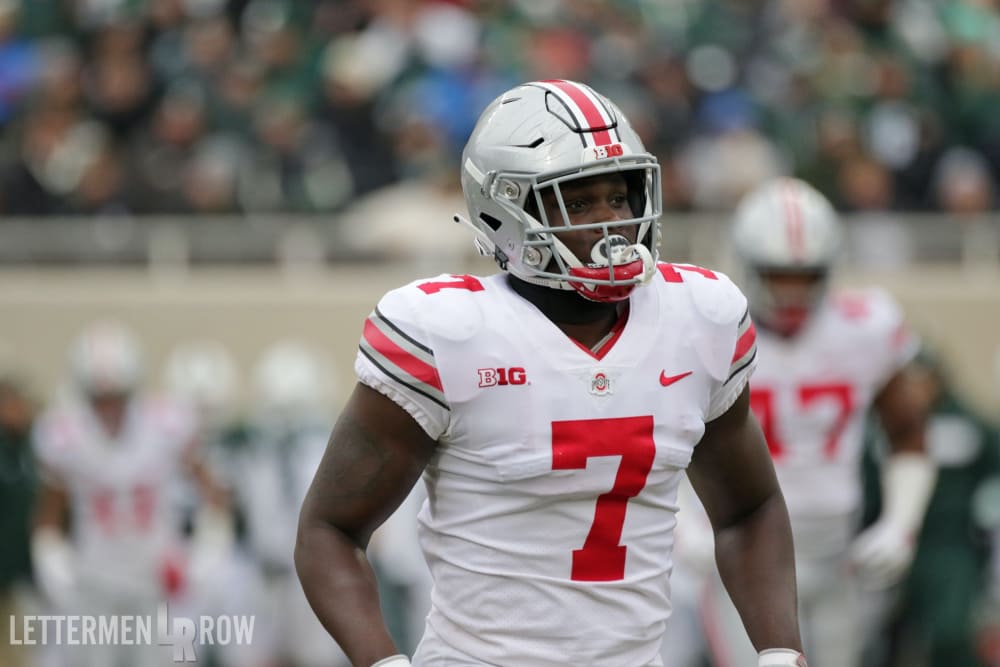 Ohio State linebacker Teradja Mitchell turned heads on special teams and could be in line for more action at linebacker next season. (Birm/Lettermen Row)

Mitchell earned enough trust from coaches this season to have appeared in nine games, though he was not officially credited with any tackles and oftentimes made the type of gritty plays that show up on film but in a box score. Still, Mitchell praised the impact of Ohio State’s veteran linebackers as he prepared to maximize a month of bowl preparations.

â€œThose guys taught me a lot, definitely just how to train hard, practice hard, go hard in everything you do,â€ he said. â€œWatching film, theyâ€™ve set a great example for me.

â€œEspecially Justin Hilliard — that guy is an energy-giver right there.â€

Just a junior, Hilliard is expected back next year to help anchor the middle of the defense for the Buckeyes. Mitchell is targeting several areas now and ahead of spring camp in order to carve a more consistent role in the defense.

â€œDefinitely just going hard,â€ Mitchell said. â€œAs in going through summer and fall camp, I learned how to just work hard, go hard in everything you do.

â€œAnd I definitely look to improve in just learning the playbook, learning the defense more so hopefully I can contribute more next year.â€

Near seasonâ€™s end, retiring coach Urban Meyer saw in Mitchell the effort that could lead to an expanded role for the Virginia Beach native.

â€œTeradja Mitchell played one of his best days, just wiping guys out on kickoffs,â€ Meyer said 48 hours after the Buckeyesâ€™ blowout-win in The Game against rival Michigan. â€œOnce again, the unsung heroes that we called them. And I showed the whole team. Sat right here [in the team room] and it was probably 30 minutes of watching the heroes play.â€

It’s probably no secret where the heroic efforts come from.