COLUMBUS — Ohio State showed it belongs on a big stage.

Now the Buckeyes just have to figure out how to finish off a complete performance.

In the first game of the new year, Chris Holtmann’s squad showed how it had earned that No. 14 ranking nationally and looked more than capable of pulling off an upset win over No. 8 Michigan State. But it ultimately couldn’t generate enough offense or come up with enough stops in the deciding moments, falling to the Spartans in an 86-77 loss on Saturday afternoon at Value City Arena.

What can be learned from that outing for the Buckeyes as they dive into the heart of Big Ten action? Lettermen Row is breaking down the loss with Three Points.

There will almost certainly be more talented teams under Chris Holtmann coming in the future. And if those groups can match the work ethic of this current squad, look out for what Ohio State might be capable of under his leadership. That’s not meant as a knock for these Buckeyes, who have a blossoming star in Kaleb Wesson and a skilled veteran in C.J. Jackson. But the reality is this team has a relatively small margin for error against top-flight competition, so it has to make all the extra-effort plays and has to consistently maximize its intensity. That wasn’t really a problem against Michigan State, which was highlighted during a key stretch just before halftime that included three different saves on the sideline before ultimately producing a 3-pointer that had Value City Arena rocking. But it still wasn’t enough against the Spartans this time around.

The signs of Kaleb Wesson becoming a force have been hard to miss recently. But it’s one thing to rack up dominant performances against overmatched non-conference opponents and quite another to lead the way in a critical Big Ten battle against a team like Michigan State. The sophomore showed that he can keep raising the ceiling for the Buckeyes thanks to improved versatility and conditioning along with a solid array of post moves that allows him get easy buckets. When Wesson stays out of foul trouble and is locked in defensively, Ohio State is a dangerous opponent — one capable of winning a few games when March rolls around. But he can’t afford to miss key stretches by letting the officials force him to the sideline, especially in tight games. 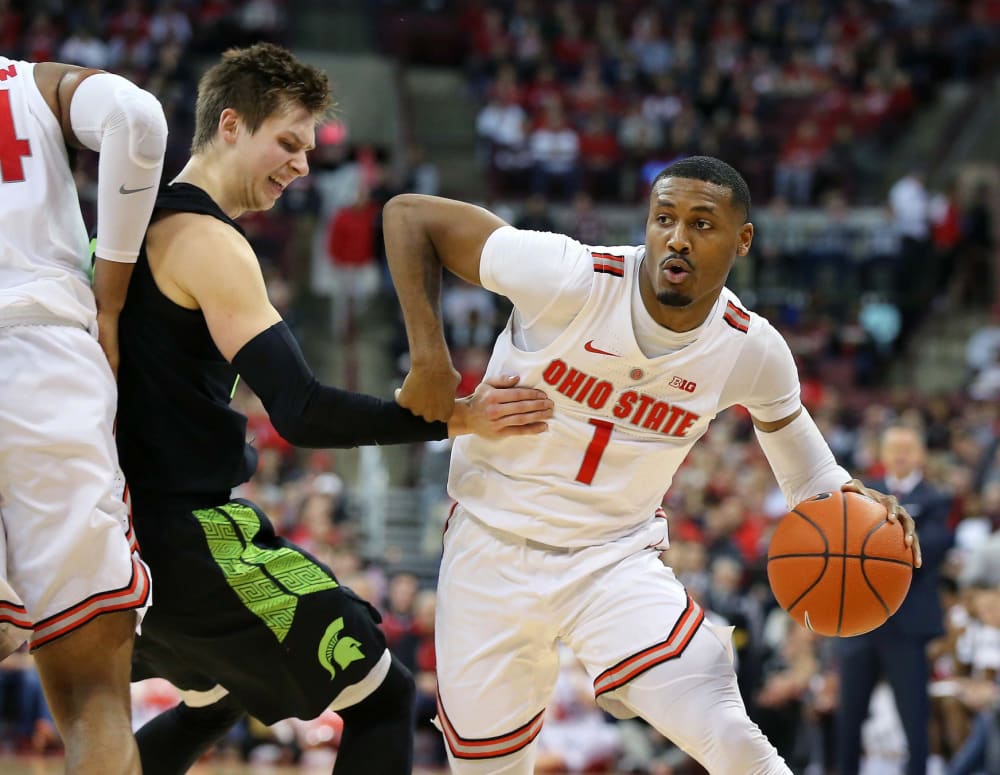 Freshmen will learn from experience

Luther Muhammad and Duane Washington Jr. clearly weren’t intimidated by the atmosphere or the level of competition, which is an encouraging sign for the Buckeyes down the road. But there are obviously still times where they look like freshmen, mainly when they are forcing up questionable shots or handing over a costly turnover. Ohio State expected growing pains and can live with them, otherwise Holtmann wouldn’t be putting them on the floor in heated situations like he did against the Spartans. The Buckeyes were rewarded with a combined 17 points that helped offset a couple shaky moments, and that experience should pay off later in the season for both guys.