COLUMBUS — With the addition of Justin Fields earlier this week, Ohio State now has its highest-rated high school recruit ever on its roster heading into the spring — adding another wrinkle to an already interesting quarterback room.

A Georgia native, Fields emerged out of high school as the No. 1 dual-threatÂ quarterback in the country and the No. 2-ranked overall prospect in the 2018 recruiting class. He received a five-star rating and a composite score ofÂ  0.9998, which ranks tied for eighth all-time in the ranking’s history.

Fields will obviously add to an extremely talented program, and he will likely have an immediate impact in 2019 if he gains immediate eligibility. Overall, he will add to an already impressive history of highly-rated prospects to wear the Scarlet and Gray. Lettermen Row is looking back at some of the other highest-ranked high school players all-time to suit up for the Buckeyes to put the arrival of Fields in perspective.

A member of the 2008 recruiting class and tied for the 12th-ranked prospect all-time, Terrell Pryor had some of the exact same credentials Fields did coming out of high school: theÂ No. 1 dual-threatÂ quarterback in the country and the No. 2-ranked overall prospect in the class. He became the first player in Pennsylvania history to run for 4,000 yards and also throw for 4,000 yards — and won the state’s player of the year award twice.

While at Ohio State, Pryor threw for over 6,000 yards and 57 touchdowns while also rushing for another 2,000 yards and 17 touchdowns. He shared time with Todd Boeckman during much of his first season, but assumed the starting role the next two seasons before announcing he would not play for the Buckeyes in 2011 after he had been suspended for the first five games of the year. He has since bounced around the NFL for eight seasons, including this year with the Bills and Jets.

Coming out of Cleveland and Glenville High School, Ted Ginn Jr. was actually recruited by Ohio State as a cornerback and was an excellent track athlete. He was named the USA Today Defensive Player of the Year in 2004 and ultimately is now tied as the 23rd-ranked prospect all-time. As the No. 1 cornerback in the nation and No.1 player in the state, he joined the Buckeyes as a wide receiver and punt returner.

He made a name for himself with his open-field speed on punt and kickoff returns while in Columbus, racking up eight returns for scores over three seasons. Ginn Jr. also caught 15 touchdowns for Ohio State, with nine of them coming in 2006. He was then taken ninth overall in the 2007 NFL Draft by the Miami Dolphins, and has built an extremely solid career in the league over the past 12 seasons.

Noah Spence certainly didn’t wind up with the career at Ohio State that was projected thanks to his eye-popping recruiting credentials. The 97th-ranked prospect all-time, Spence emerged as the No. 1 weak-side defensive end and No. 1 player in Pennsylvania in the 2012 recruiting class before coming to Columbus.Â Over his junior and senior seasons, he had 204 tackles and 35.5Â sacks — and as a senior he was named theÂ Gatorade Football Player of the YearÂ in his home state.

For the Buckeyes, Spence played two seasons with his best coming in 2014 when he racked up 50 tackles and eight sacks over 13 games. However, his time with Ohio State was cut short due to two failed drug tests, and he was ultimately ruled permanently ineligible by the Big Ten in November 2014. He then transferred toÂ Eastern Kentucky University and in his lone season, he recorded 63 tackles and 11.5 sacks and was named theÂ Ohio Valley ConferenceÂ co-Defensive Player of the Year.

Spence was next drafted 39th overall by the Tampa Bay Buccaneers in the 2016 NFL Draft and has chalked up 34 total tackles and 6.5 sacks in 34 career games. 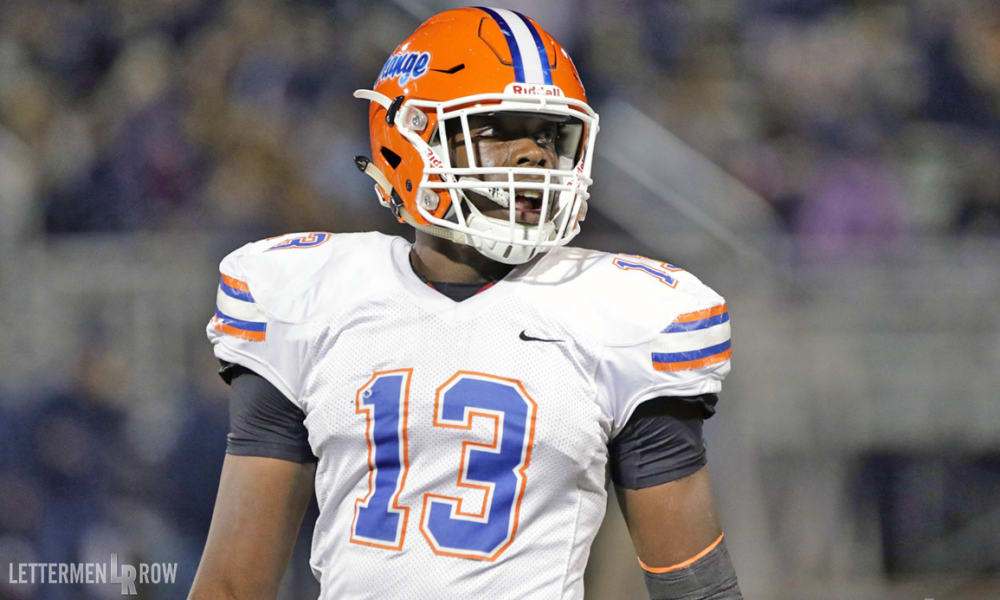 A local product in the class of 2019, Zach Harrison was a five-star prospect ranked 130th all-timeÂ who needed months to narrow down his list and make a final decision. All three of his final schools, Ohio State, Michigan and Penn State, were on his mind of where he wanted to continue his academic and athletic careers. In the end, however, he chose the Buckeyes in order to reach his full potential.

Harrison ranked as the top prospect in Ohio in his class, and the No. 4 player nationwide as a defensive end. HisÂ 6-foot-5, 245-pound frame and 4.5 speed made him a massive threat on the Olentangy Orange defensive front and earned him a spot in theÂ 2019 All-American Bowl. Now, after he enrolls on campus for spring practice, he’ll have the chance to finally begin to work with legendary defensive line coach Larry Johnson.

So don’t be surprised to see Harrison in the opponents’ backfield on a regular basis next fall.

Speaking of the Buckeyes defensive line, Nick Bosa is the latest product of the Silver Bullets heading to the NFL.

The No. 135-ranked prospect all-time, Bosa was nearly a lock to commit to Ohio State after seeing what his brother Joey experienced in Columbus and how it earned him a spot as a top-three pick in the 2016 NFL Draft. Nick Bosa sat as the top defensive end in the country in the class of 2016, and the No. 8 prospect overall. He made an immediate impact for the Buckeyes when he arrived on campus, and in just three games his final season, made plenty of buzz before having his year cut short due to injury.

The former rushman will likely be a top-three pick this May in the 2019 NFL Draft just like his brother, if not the No. 1 overall selection. And it will be great to watch another Bosa on Sundays causing havoc for quarterbacks around the league.