COLUMBUS — Trey Sermon checked an imaginary watch in the end zone, and the relief was as obvious as his excitement.

The plan never called for the transfer to need five games to score his first touchdown at Ohio State. He certainly didn’t envision that drought taking him all the way into December without delivering the kind of explosive plays that were projected when he and the Buckeyes joined forces in the spring.

The patience was obviously rewarded when he dashed down the sideline two weeks ago at Michigan State, punctuating a performance that made it quite clear why he was so coveted by the program when the graduate elected to leave Oklahoma earlier this year. Yes, it took a little longer than expected to get comfortable — but now Sermon is gaining strength and poised to make a major impact at the most opportune time for the Buckeyes.

“I definitely felt like it was going to happen,â€ Sermon said after the win at Michigan State. “Each week I just felt like I was gradually getting better, getting more in sync with the offensive line and just getting used to playing with those guys. 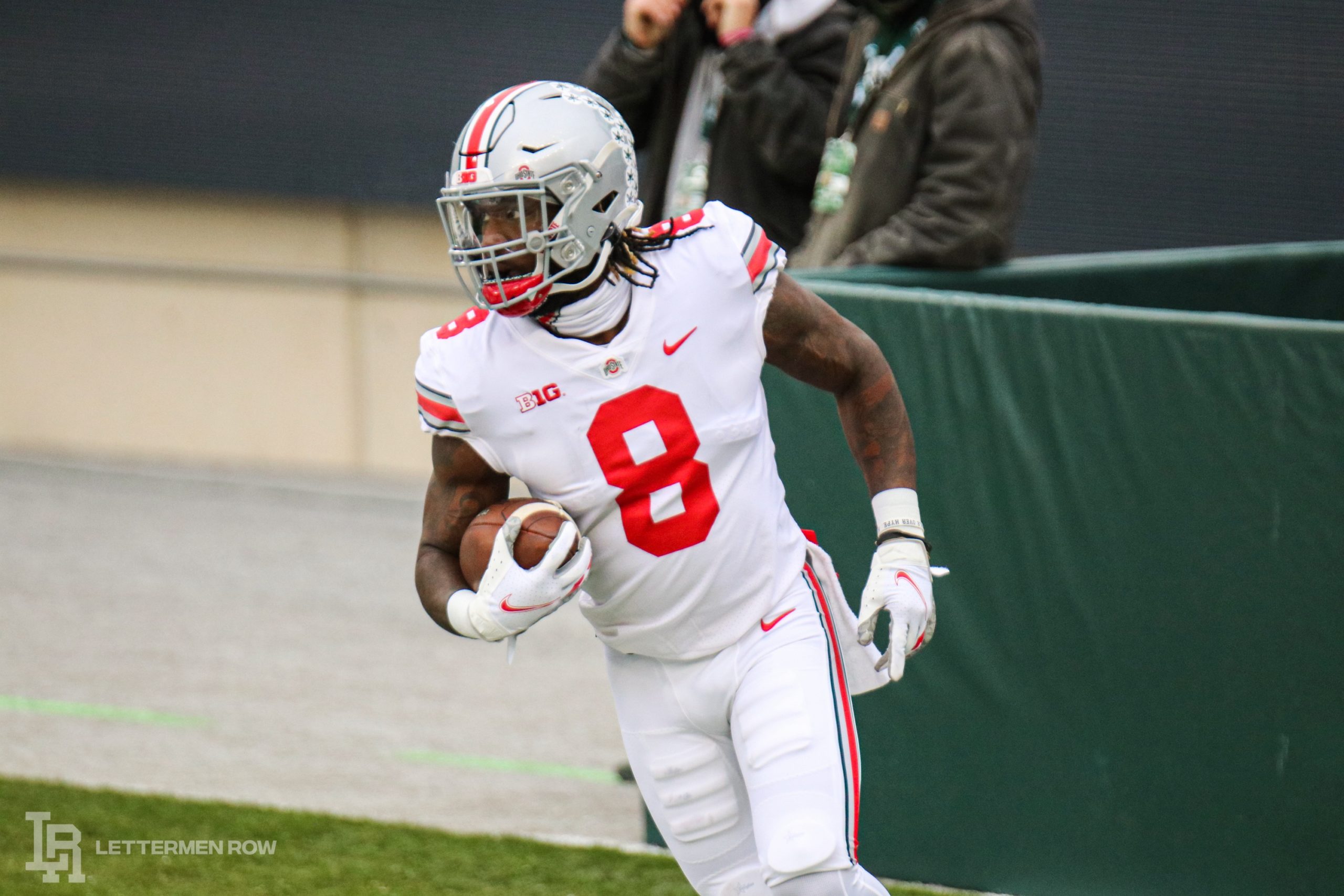 Trey Sermon is emerging as a dangerous threat for Ohio State on the ground. (Birm/Lettermen Row)

“It was kind of slow the first few games. But I mean, it’s about just practicing hard, continuing to get reps and just getting a good feel for it. And I was able to make the most of my opportunities.”

After what Sermon turned his 10 carries into against the Spartans, odds are a lot more chances are coming his way after he racked up 112 yards with a blend of breakaway speed, sharp cuts and a willingness to drop his pads and plow through contact. His dazzling 64-yard dash to the end zone obviously was the long-awaited highlight for Sermon. But the entire outing was a reminder that he’s been on a steady upward trendÂ at Ohio State and is now averaging better than six yards per carry on the season — a number that has continued to climb as he’s grown more comfortable every game.

The Buckeyes appear to have found a workable system for two tailbacks alongside Master Teague, as long as they continue to show flexibility to ride the hot hand. Now with Sermon finally heating up the level he expected, Ohio State is only going to get more difficult to deal with on the ground.

What is allowing Trey Sermon to start building momentum at Ohio State? Where can the Buckeyes tailback keep finding ways to boost the ground game in the postseason? How many touches does Sermon need on Saturday against Northwestern? Former Ohio State star running back Beanie Wells put on the highlights and answered those questions in the latest episode of BuckIQ.