COLUMBUS — Lost, or perhaps obscured, by the confetti that rained down on the brilliance of the Ohio State passing attack was an important fact about the running game.

Justin Fields certainly delivered the greatest performance ever by an Ohio State quarterback in the 49-28 win over Clemson in the Sugar Bowl on Friday night. But along the way, the renewed ground game for the Buckeyes was certified.

Yes, Trey Sermon and the offensive line showed signs of renaissance in the win at Michigan State two games earlier. Then Sermon went off on a school-record 331-yard performance that saved the day in the Big Ten title game win over Northwestern, which previously boasted of the leagueâ€™s top-ranked defense against the rush.

But Friday night in the Superdome in New Orleans, that College Football Playoff semifinal was played in front of a much more discerning and skeptical group of critics. Sure, the Buckeyes and Sermon had ripped through Michigan State and Northwestern, the thought chain went, but that was just in the Big Ten which looked more like a fruit cocktail and than a bonafide Power Five conference this pandemic-abbreviated season. Letâ€™s see how they deal with Clemson and its Brent Venables-inspired defense with all those five- and four-star players running around.

“I mean, it started at the Michigan State game,” Ohio State coach Ryan Day said. “That was the first one where he kind of [had] — I guess comingâ€‘out party is the best way to put it. I think it was where he got his confidence. And then the last two games, he’s been excellent. He’s been a differenceâ€‘maker. He really wasn’t early on. I think he was kind of finding his way. 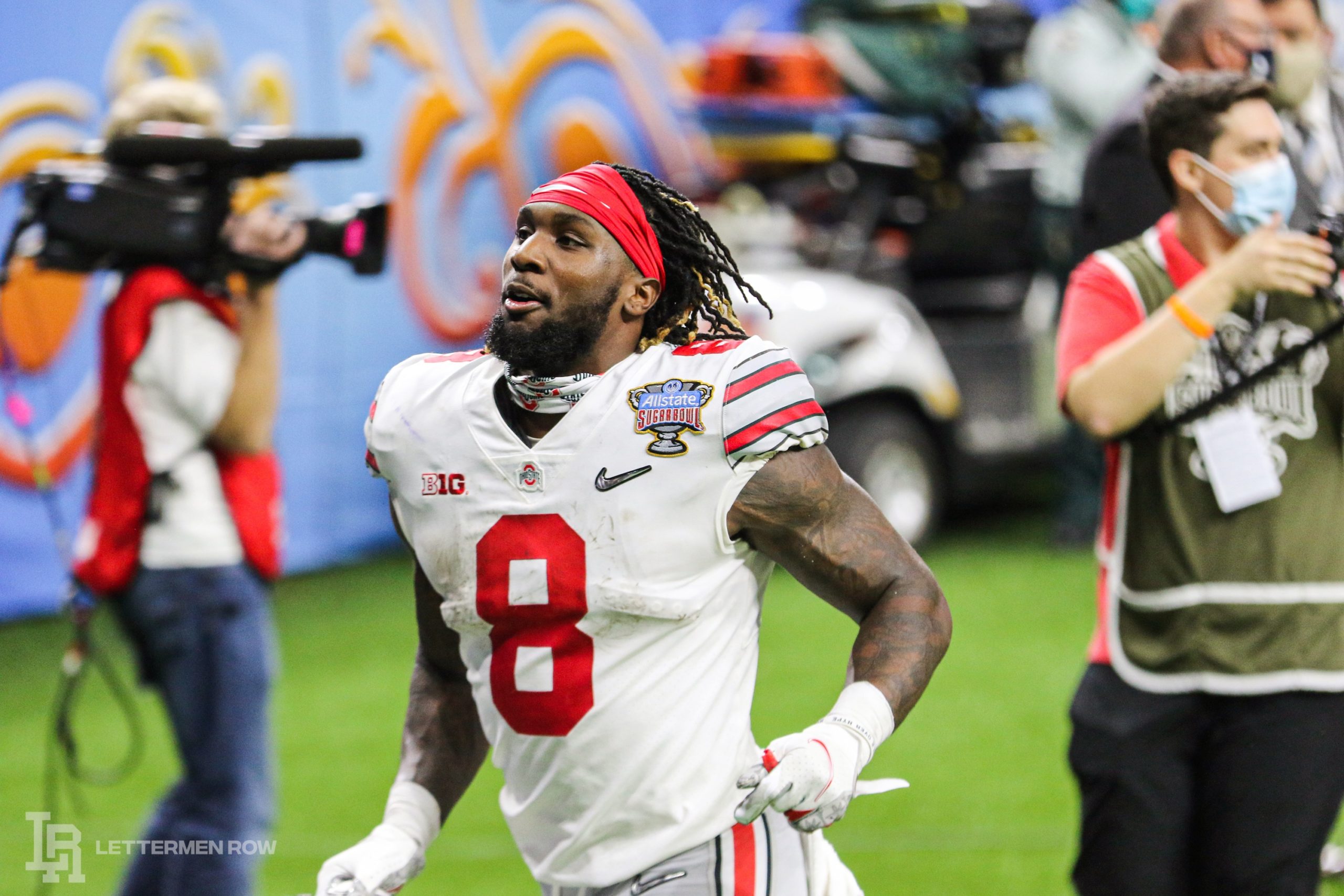 Ohio State running back Trey Sermon was a major force in the Sugar Bowl. (Birm/Lettermen Row)

That obviously continued against Clemson as Sermon ran for 193 yards on 31 carries. Like an I-back of old, he slashed through the line, refused to submit to arm tackle attempts and he rambled. He was the perfect complement to the battered Fields and his gutsy, show-stealing, 385-yard, six-touchdown passing performance.

Itâ€™s also why experts should be rethinking their take on the coming College Football Playoff title game Jan.11 in Miami when the Buckeyes take on Alabama. Like the Crimson Tide, Ohio State has shown on the big stage it has elite balance, a passing attack and a running attack capable of playing with anyone.

The reason is Ohio State has an offensive line which takes a backseat to no other in the country this season. Against Michigan State, it was missing three starters and a primary backup due to Covid positive tests, yet it plowed the road. Against Northwestern, again, it was facing the best stop sign the Big Ten had to offer this season and it blasted through undaunted. 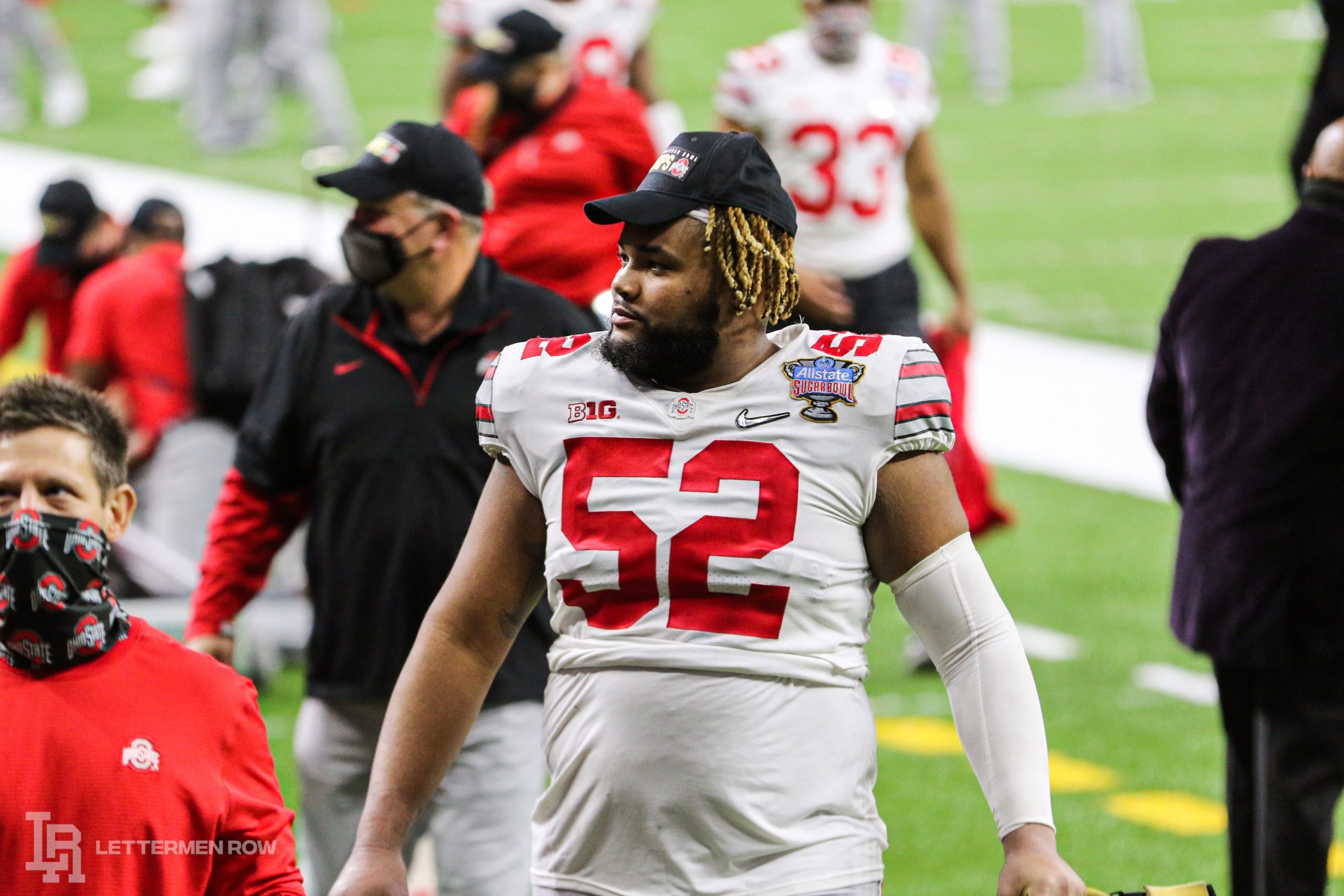 The line was the bully pulpit for Sermon. Just over a year away from a knee injury and subsequent transfer from Oklahoma, the senior has looked much more like the high four-star prospect he was coming out of Marietta, Ga., four years ago.

â€œIt feels great, especially having a guy like Trey back behind me,â€ Davis said. â€œAs long as we give him some creases, heâ€™s going to make something special happen out of it.â€

And to be down in the midst of that power, where the torque is brought to bear against what aspires to be an unyielding defensive front, is a feeling like no other for an offensive lineman.

â€œIt feels really good, especially just being able to control the line of scrimmage,â€ Davis said. â€œItâ€™s something I think weâ€™ve done a much better job of these last couple of games. And really, in this game, when it mattered the most and we needed to drive the ball and control the clock, thatâ€™s what we did. And were able to do that by controlling the line of scrimmage. Trey was making exceptional plays, obviously with Justin and the pass.â€

The proof was on the scoreboard for all to see at gameâ€™s end, an Ohio State bowl-record 49.

â€œIt feels really good when you put on that amount of points against a team like this,â€ Davis said. â€œWeâ€™ve just got to keep that going.â€