COLUMBUS — The drama is hard to resist, and Ohio State’s investigation certainly isn’t in short supply of it.

It’s understandable to want more information when the future of one of the sport’s powerhouse programs and the legacy one of the all-time coaching greats in college football are hanging in the balance. And for anybody looking for the latest whispers about where Urban Meyer and the Buckeyes stand or what really happened with Zach and Courtney Smith, there have been ways to find some.

But this thirst for more details, these public arguments about the facts that nobody truly knows and the parsing of how some of the reporting was done are overshadowing something critical to keep in mind. The independent investigation being run by six people appointed by Ohio State is the only thing that counts, and a lot of wild swings in emotion can be avoided by simply letting it come to a conclusion. 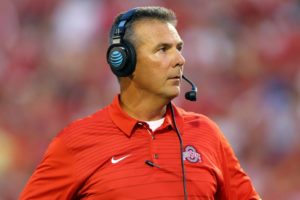 It’s tempting to get sucked into the statements from Zach Smith’s mom and Courtney Smith’s mom. And quite frankly, pairing what Tina Carano reportedly said about her daughter with the fact that there were never any criminal charges would certainly seem to support a belief that Ohio State handled the matter as well as it could in 2015 — or at least according to protocol.

But not every detail that has emerged this week is worth spending any time arguing over in public. I fell into that trap on Thursday when certain media outlets were getting hysterical over the fact that Zach Smith hadn’t been contacted as part of the investigation. Of anybody involved in this case at this point, to me it seemed like the former wide receivers coach was the one that the Buckeyes had already heard from the most and was therefore justifiably on the back burner.

Making that point, though, didn’t actually accomplish anything. Anybody pointing out flaws and apparently sneaky edits in some of the Facebook reporting isn’t going to change what happened at Big Ten media days with what Meyer may or may not have been responding to with his misleading statements. Does it potentially provide an explanation? Sure, although that’s still just speculation since Meyer hasn’t yet had a chance to fully explain himself publicly. Even trying to dig into what happened with Zach Smith and Courtney Smith in some respects doesn’t make much difference at this point.

That might sound crazy, but right now, the investigation is centered around what Urban Meyer and Gene Smith knew about the allegations, whether they were properly reported and why they felt comfortable keeping Zach Smith on staff for almost three years after it came to their attention. It can certainly be argued that the lack of charges and the details of those incidents are going to be key to understanding Ohio State’s decision to retain him for so long, and the latest information that has trickled out does seem to point to growing momentum for Meyer to return to the sideline.

But that prediction could be upended by the next revelation on social media, which is exactly why it’s better not to make one about a matter like this in the first place. Following every development and covering this story has been bizarre, maddening and extremely difficult given the sensitive nature of the subject. Lettermen Row is trying to do everything it can to get this right and be fair to everybody involved, and it’s a challenge.

We know Ohio State fans want to hear how this is all going to end and if Urban Meyer will eventually be cleared. And it’s obviously been a wild stretch with all these twists and turns in a story that has seemingly been going on for months instead of just a couple weeks.

The investigation is almost halfway to the deadline and will be over soon. There has clearly been a rush to judgment by many, which has gone hand in hand with attempts to speed up the reporting of this story. Considering some of the errors that has produced, the way it’s encouraged family members to try to settle the case publicly and the enormous amount of facts that simply aren’t known yet, none of this has done anybody involved any favors.

The best way to avoid the roller-coaster of emotion of this process? Stay off the ride as much as possible until it’s definitively done.