Ohio State: Urban Meyer rides out of Rose Bowl, into retirement on top
Aritcle written by:

PASADENA, Calif. — Urban Meyer missed the chance to ride into the sunset for a true fairytale ending.

When the Ohio State coach strolled out of the locker room for the last time at 6:52 p.m. Pacific time, climbed into the front seat of a golf cart with a Gatorade, a boxed Chick-fil-A dinner and his family in tow, the sun had long gone down over the Rose Bowl.

He had obviously been busy when the lights came on and the game was tightening for the Buckeyes in the second half on Tuesday. And Meyer was truly in no hurry to leave once his team had again proven itself up to the challenge against another conference champion, holding off Washington down the stretch in a 28-23 victory that puts a bow on a legendary run at Ohio State.

He wanted to hug his players. He needed to take pictures with another championship trophy and sing Carmen Ohio one last time. He climbed the stairs in front of The Best Damn Band in the Land and gave them a salute. He slowly strolled across the field he had dreamed of standing on since he was a kid, a right arm around his wife Shelley who was holding a bright-red rose across her heart, two kids flanking just behind them both.

And after one more celebration, one more postgame press conference, one ceremonial passing of the whistle to Ryan Day, one more glance around an emptying locker room, he walked out and started a drive up a ramp and into the next chapter in his life. 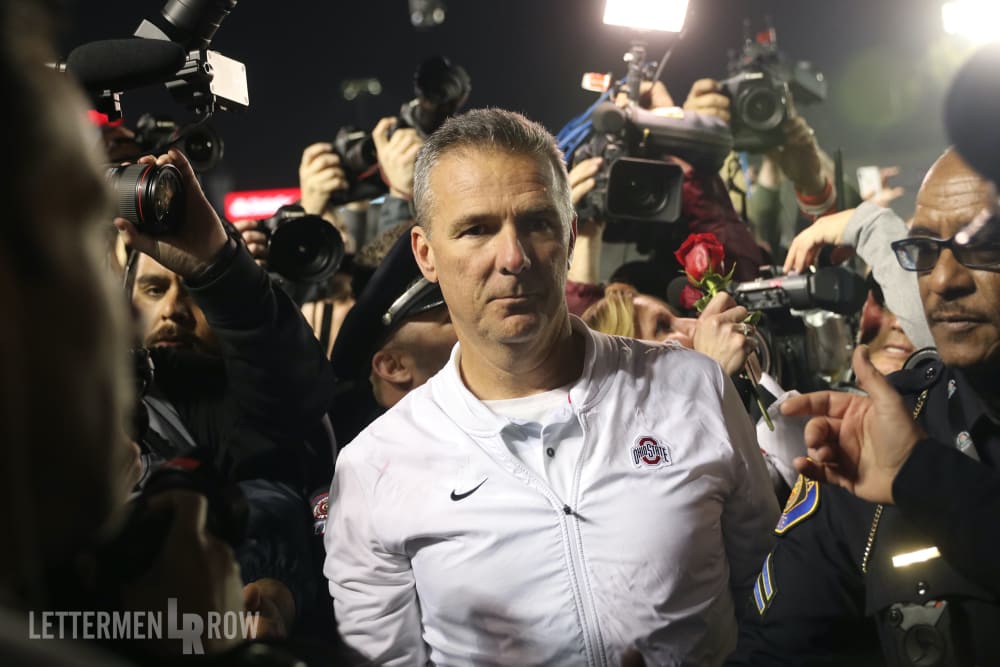 Urban Meyer made his final walk as the Ohio State coach across the field at the Rose Bowl. (Birm/Lettermen Row)

“But the new guy’s got to worry about that, and we’re certainly going to help him.”

Meyer is still going to have a role with Ohio State, and the new plan includes him continuing to play a mentorship role for both players and coaches as an assistant athletic director. But as his reach across campus expands, and his time around football is going to shrink in the process.

That’s the only way forward for Meyer. It’s also the only way forward to allow Day to put his stamp on the program. And while there is nothing ever guaranteed in the crazy world of college football, particularly given Meyer’s relatively young age at 54 years old, there was a sense of finality as the tears flowed from the Meyer family almost nonstop until the game ended and the shuttle pulled into the night.

The tricky part is that Meyer again made it abundantly clear that he can still coach, returning from his suspension at the start of the year to produce another Big Ten championship, a blowout win over rival Michigan to remain unbeaten in The Game — and following that up by knocking off No. 9 Washington in the Rose Bowl.

“I’ve been blessed,” Meyer said. “I know this is relatively young, but I started young, 17 years as a head coach, 33 years doing this. And just very fortunate, and I do believe I’m done.

“There was a lot of joy along the way. That’s something I have to learn to have — more joy. And there was joy when you see that you have one more point than the opponent at the end of the game.” 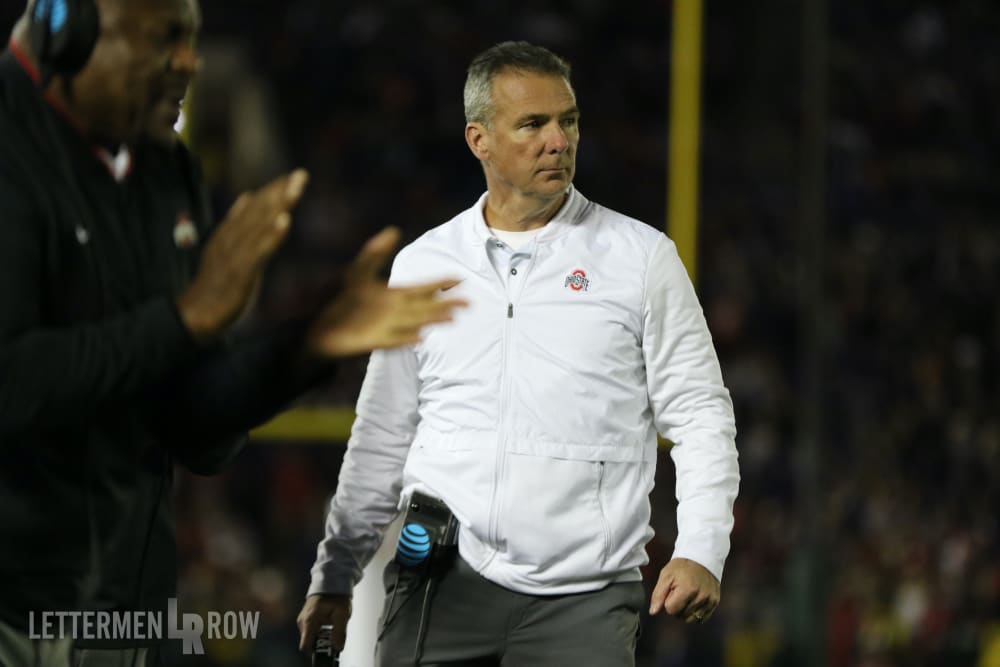 Urban Meyer left no doubt he was still a big-game coach with a win in the Rose Bowl. (Birm/Lettermen Row)

That happened way more often than it didn’t during Meyer’s record-setting run with Ohio State, and there’s no question the program will miss him on the sideline moving forward. For all of the potential Day brings to the job and the excitement about the makings of a national-title contender on hand for the Buckeyes heading into next season, there’s nothing easy about replacing a no-doubt Hall of Fame coach.

Perhaps that’s best served as a discussion for another day, maybe it can even ramp up on Wednesday when Day is officially in charge. But before any of that, the Buckeyes had to make sure there was one last win for Meyer to celebrate.

“I wouldn’t say anything changed as far as Coach Meyer’s demeanor other than taking every game by the horns and knowing it’s our opportunity to go show we’re the best team in the country,” quarterback Dwayne Haskins said. “So to be able to have three weeks for the preparation for this team, all that we put in for this team and this game, and to have the added benefit of Parris [Campbell’s] last game, Coach Meyer’s last game, a lot of added motivation to ourselves as a team to know that we have to go out there and play our best ball for each other and no selfishness with anybody.

“So, this really just shows much love we have for one another. That got us this win today.” 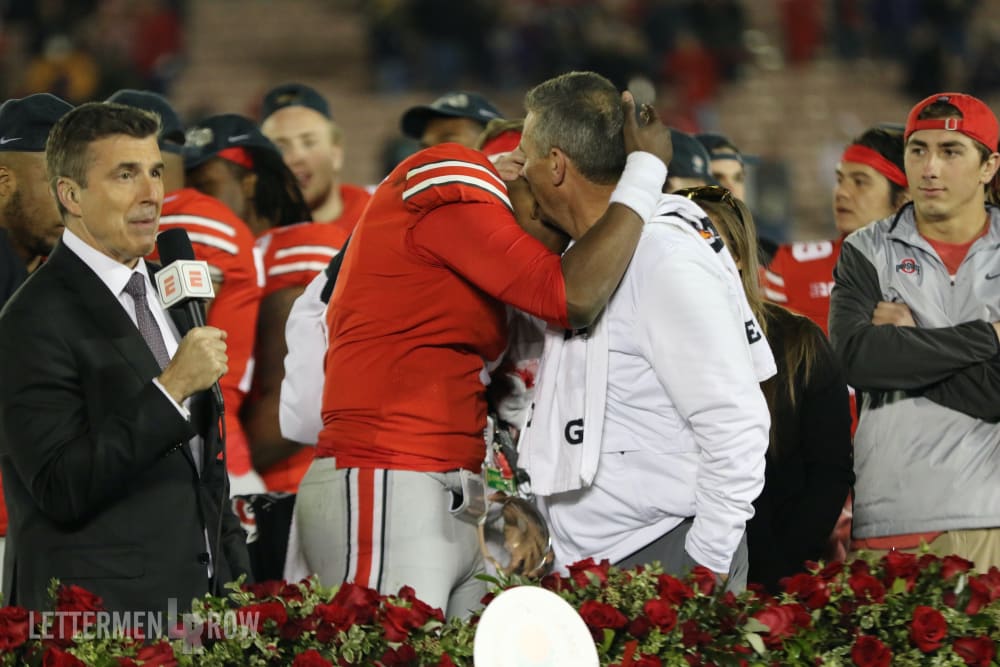 The emotions spilled over after the Rose Bowl for Urban Meyer and quarterback Dwayne Haskins. (Birm/Lettermen Row)

There will be more in the future for Ohio State, of course.

The program is bigger than any one person, time marches on for everybody and the Buckeyes have no choice but to move on without Meyer. And for Meyer, it’s time for him to find a new challenge.

“I have no idea, to be honest with you,” Meyer said. “I’ve been thinking about that a little bit — and also trying not to think about it because it gets in the way of these two players and the team.

“But I have the best athletic director that you can be around. I have a school that I love dearly. I feel very welcome in Buckeye Nation, and I’m an Ohioan. So my job as we move forward is to make Coach Day, who is an elite coach, make this program even stronger, and that’s all our focus. That’s their focus, my focus, Gene Smith’s focus. It’s a very strong program, but we’re going to make it stronger.”

Meyer built Ohio State into the behemoth that is now, perhaps stronger than it’s ever been.

The schedule might not have lined up quite right for the sun to set on both the San Gabriel Mountains and a legendary coaching career simultaneously.

But from a big-picture perspective, the timing might have worked out perfectly for a fitting end for Urban Meyer.