The speculation, debate and conversations about Ohio State never end, and Lettermen Row is always ready to dive into the discussions. All week long, senior writer Austin Ward will field topics on the Buckeyes submitted by readers and break down anything that’s on the minds of the Best Damn Fans in the Land. Have a question that needs to be tackled, like the one today on how the Buckeyes are handling training camp without Urban Meyer? Send it in right here — and check back daily for the answers.

What is the atmosphere like in the locker room given all of the changes? (I get media is limited). I believe one commit reopened his commitment, have there been others? May be a good thing this is happening during a dead period??

The glimpse was about brief as possible for the media last week at Ohio State’s training camp, but that was almost all it took to confirm that the program is handling its business just like usual. Of course, it’s not normal for Urban Meyer to be missing from the practice field, and it’s pretty hard to come up with a scenario where removing one of the most successful coaches in college football history wouldn’t come with some level of drop-off were his absence to continue much longer.

But the position coaches handled their duties the way they always have before, strength coach Mickey Marotti was setting the tone like he does for most of the year already and the Buckeyes have not done anything on social media that would suggest there is anything amiss during this independent investigation.

Now, it’s hard to get a truly accurate read on this situation while in the midst of Ohio State’s misguided* media blackout. Watching half an hour of practice is a tiny sample size, and the public video releases and highlight reels pare that information down even more. But it’s a sign of the strength of the program Meyer has built that it could function properly without him for a few weeks during training camp, which could wind up being critically important down the road for a playoff contender if he does get cleared to return this week. 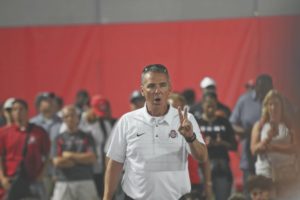 The investigation into Urban Meyer should conclude by the end of the week at Ohio State. (Birm/Lettermen Row)

*Nobody likes to listen to the media complain about access, I know. But Lettermen Row covers the entire football team, not just Meyer, and we believe the passionate Ohio State fans want to know the latest developments on the roster. The program isn’t allowing us to do that job, and aside from being a personal frustration, it’s arguably also hurt Ohio State to not be able to change the subject even slightly away from the investigation. Think about some of the crazy amounts of attention every piece of drama has produced over the last few days — in some respects due to the fact there is nothing else to discuss. Is Urban Meyer all some outlets would focus on? Of course, but a couple no comments from the players or Ryan Day or Greg Schiano should allow people to move on and actually discuss the team as whole at places like this one and several others in Columbus. Rant over.*

The trick is figuring out just how significant not having Meyer around has been and what the impact could be if he isn’t returned to the sideline in the next week or so. It can be pretty easy for a team to rally around a cause and believe that having a ton of veteran leadership and a couple former head coaches on staff will allow it to move forward with no issues. But that rarely works out for extended periods of time when teams go through adversity, no matter how well positioned the program is for success. The Buckeyes have seemingly everything they could need to still win at a high level this season, but it would be foolish to think a staff shuffle in August or the loss of Meyer’s presence wouldn’t eventually have an impact on Ohio State.

Going through a couple weeks of scripted practices is manageable, though. Ohio State appears to be doing just that without a hitch, which continues to bode well for the defending Big Ten champions. But the longer this mess drags on without a resolution, the more likely it is to inevitably take a toll on the Buckeyes.